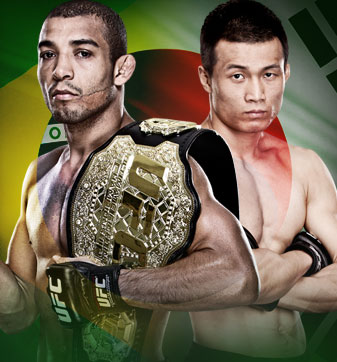 There's never much down time in the world of the UFC, so just days after UFC on FOX 8 finished, UFC 163 will get underway in Brazil with the return of featherweight champion Jose Aldo as he takes on one of the toughest and most popular fighters in the division, Chan Sung Jung, aka The Korean Zombie.

Also on the card, former UFC light heavyweight champion Lyoto Machida returns to action to face NCAA champion wrestler Phil Davis in a pivotal bout at 205 pounds. With champion Jon Jones awaiting his next fight against Alexander Gustafsson at UFC 165 in September, Machida vs. Davis will provide the winner with an inside track towards the next title shot.

In today's fantasy preview, we focus on the main card with some of the key factors for the upcoming fight card, taking place in Rio de Janeiro, Brazil:

1)    There's a reason why you keep hearing Jose Aldo's name mentioned alongside Jon Jones and Georges St-Pierre - he is that good. Aldo may fight in a smaller weight category than the two aforementioned champions, but he's got a streak in title fights that's actually longer than Jones, and he has more finishes in his last six bouts than GSP. He is a volume striker who can be absolutely devastating with his leg kicks, not to mention the rate he throws. Aldo has seven knockdowns in his featherweight UFC/WEC career, and has landed an incredible 495 significant strikes. His takedown defense is also phenomenal at 92.4 percent, stuffing 61 of 66 attempts. What does all this spell out?

Bad news for his opponent, The Korean Zombie.

Jung is one of the toughest fighters that Aldo has ever faced, but The Korean Zombie got that reputation because he's been in some absolute wars during his career. His fight with Leonard Garcia in 2010 was the stuff of legends, and statistically his striking defense is 67% (actually slightly better than the champion). But stats don't always tell the whole story. Jung can take punishment like few can and still come back for more (hence his telling nickname), but in this fight consider Aldo to be the UFC's version of Daryl Dixon. There's a big payoff if the Zombie can come through with a victory (+400 points as a huge underdog), but the risk isn't worth it. Aldo should hold on to his title although this could be a barnburner if Jung can make it to the later rounds.

2)    Lyoto Machida does very well against wrestlers. If you look at the career record of the former light heavyweight champion, you'll notice it's littered with wrestlers throughout the 205-pound weight class. You'll also notice that Machida has beaten almost all of them. His two losses against fighters with wrestling backgrounds have come against Quinton "Rampage" Jackson (a very close split decision) and to the current title holder Jon Jones. Outside of that, Machida has feasted on grapplers like Rashad Evans, Ryan Bader and Dan Henderson. This time around he's taking on maybe the most physically gifted wrestler in former Penn State standout Phil Davis. Davis is a hulking light heavyweight with shoulders as broad as a building, but his takedown rate at just 47.6 percent accuracy could struggle against Machida's quick feet and in and out motion. Machida is a master of making opponents miss, and if Davis can't secure a takedown early, he might spend the majority of this fight chasing, which plays right into the Brazilian's counterstriking brilliance. If Machida can keep Davis on the outside, he will potshot him for 15 full minutes and exit the Octagon as the victor.

3)    One of the tightest matchups on the card pits former UFC title challenger Thales Leites, in his return to the UFC, against British striker Tom "Kong" Watson. There may not be a more clear case on this entire card for a fight that will be determined based on where it takes place. Leites is a ground wizard who has submitted 12 opponents in his 20 career wins. On the other side, Watson loves a good knockout and has plenty of them to his credit. The one factor that stands out above all the others is Leites' successful takedowns. While he averages 2.4 takedowns per 15 minutes, he's only landing at 27 percent accuracy. In other words, if he doesn't succeed at first, he will try again, but at what cost, considering Watson will be bombing away at his head every time he dives in for the legs. It also can't be ignored that Leites has been out of action for more than a year and hasn't fought in the UFC for almost four years. Watson seems like the safe pick here and might even pick up a Knockout of the Night bonus for his troubles.

4)    One final note to keep an eye on with the main card is the flyweight fight between John Lineker and Jose Maria. Lineker should be the pick here - he's got the Octagon experience, he could be title contender with another win or two, and he's quite dangerous on the feet. Still, on short notice with 36 fights on his record and a nearly five year unbeaten streak, Maria might be one to keep an eye on with this card. He's a finisher who brings the fight to his opponents, and is a long standing flyweight that has competed at 125 pounds for some time. Again, the safe bet is Lineker, there's no doubt about that, but with the chance to earn an extra 175 points, Maria might be an upset pick to watch.