Looking back at the rest of last Saturday's UFC 162 card... 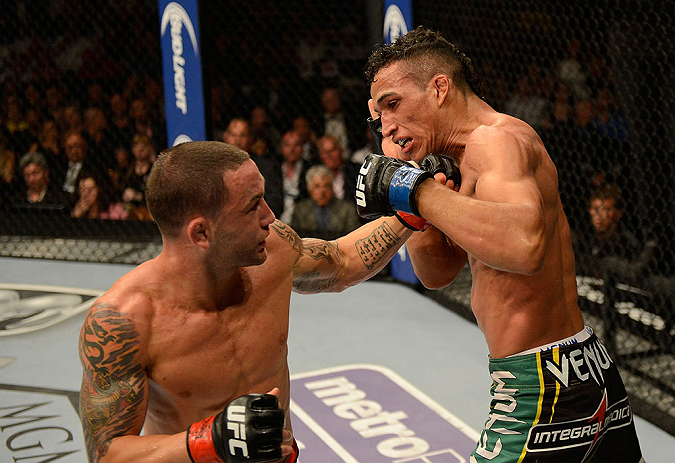 While the focus on last Saturday’s UFC 162 event was understandably on the main event between Chris Weidman and Anderson Silva, there was plenty of notable action on the evening’s undercard, as you’ll realize when you read on…

BACK IN THE SADDLE

If there’s one thing that stood out to me about Frankie Edgar’s return to the win column for the first time since 2011 against Charles Oliveira, it’s that at this point, it doesn’t look like Edgar will ever be in an “easy” fight again. I know, I know, there are no easy fights in the Octagon, but Edgar’s battles are seemingly going to be tougher than most. In the lanky Oliveira, the New Jersey native had a nightmare matchup in front of him physically and stylistically, but in a return to his pre-2012 form, he found a way to win. He was sharp, he pressed when he needed to press, and he avoided the ever-present danger Oliveira is known for giving. Of course, Edgar had some dicey moments and there was some blood flowing, but that’s a Frankie Edgar fight. It’s what he’s become known for and it’s why the fans love him. So what’s next? There’s a ton of intriguing matchups for him, but why not Edgar vs. Cub Swanson in a title eliminator? Who wouldn’t pay to see that one?

One of my favorite fighters over the years, in and out of the Octagon, has been Chris Leben. In the Octagon, he’s a free-swinging throwback to the early days of the sport, and outside of it, his brutal honesty and candor is a welcome reprieve from cliché and safe answers by pro athletes. Of course, sluggers don’t usually have the shelf life other fighters do, and for Leben to make it to 21 UFC fights is an accomplishment in itself. But having said that, it was painful watching Leben trying to beat Andrew Craig last weekend. Unable to take Craig down, Leben got picked apart from the outside by the Texan en route to a decision loss. For me, it wasn’t the same Chris Leben in Vegas that night. You could chalk it up to him getting acclimated to his new team, Alliance MMA, or to him getting a style he wasn’t prepared for from Craig. You could also say that the wars finally caught up to “The Crippler.” But I’m not prepared to write his fistic eulogy just yet. Let’s see him in there one more time and see what he has left before pen hits paper on the still fairly young (32 years old) Leben.

THE FILIPINO WRECKING MACHINE IS BACK IN BUSINESS

Anyone who knows or has even had the opportunity to spend a few minutes with Mark Munoz will say without question that he is one of the nicest people, not just in MMA but in the world. So with that alone, it was good to see him back in the win column against another one of the sport’s good guys, Tim Boetsch. But all that aside, what we saw Saturday night was a rejuvenated force that looks to be ready for another run up the middleweight ladder. Previous runs were cut short by losses to Yushin Okami (2010) and Chris Weidman (2012), and at 35, he has to make things count now. A Weidman rematch seems far off considering the new champ’s expected rematch with Anderson Silva and other folks (Vitor Belfort and Michael Bisping) waiting ahead of him in line, but a couple fights against maybe a Costa Philippou or a Jacare Souza could move him closer if he could win both. And given his performance on Saturday, he’s got a good shot at doing just that.

I’ll say it right now, and you won’t convince me otherwise: Cub Swanson has the best boxing in the featherweight division, and maybe the sport. And it’s no accident either. Working with the likes of renowned trainer Joel Diaz, welterweight champion Tim Bradley, and former Olympian Vicente Escobedo, among others, Swanson has immersed himself in the sweet science and the results speak for themselves, as he’s unbeaten in his last five bouts, with four of those wins by knockout. He’s not beating stiffs either, as his resume reads George Roop, Ross Pearson, Charles Oliveira, Dustin Poirier, and Dennis Siver. That run should put him on the very, very short list of fighters in line for the 145-pound crown. Yeah, I know current champ Jose Aldo beat him in eight seconds in 2009. That was over four years ago, and that Cub Swanson couldn’t hold a candle to the current version. A rematch with Aldo or a fight with Chan Sung Jung (if he can beat Aldo in their UFC 163 bout) would be something to see.

BARBOZA AND THE ART OF THE LEG KICK

It may not be appropriate to call something so painful an art, but when Edson Barboza delivers a kick to the leg – and another, and another – it’s hard not to appreciate the precision, the technique, and the devastating effects of what he does. On Saturday, Barboza delivered a frightful beating to the leg of Rafaello Oliveira en route to a second round TKO victory, once again putting a dent in the misguided theory that leg kicks don’t win fights. And while it looks painful from outside the cage, it’s a thousand times worse to the one on the receiving end. I remember talking to former heavyweight boxer Ray Mercer when he began dabbling in K-1 and MMA. His thoughts after his first K-1 match against Musashi in 2004: “I wore shoes, so the guys I fought knew I wasn’t gonna kick, even though I didn’t know how to kick, and they knew I didn’t know how to block anything.  They let me have it. I couldn’t walk for three days after that. It was painful; oh Lord, it was very painful.  Them guys are made of something special.” And that’s from someone not trained to deal with such kicks. Oliveira is a veteran pro and a UFC fighter. And he still couldn’t avoid Barboza’s assault. That’s scary.