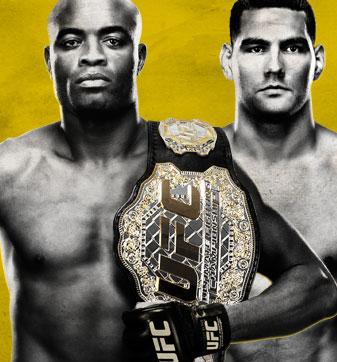 It might just be the most highly anticipated title fight thus far in 2013 when the greatest fighter in UFC history, Anderson Silva, goes for an unprecedented 11th straight successful title defense when he faces undefeated prodigy Chris Weidman in the main event of UFC 162.

Weidman has been gunning for Silva since the day he started fighting, and now he finally gets his chance. It might be a case of "be careful what you wish for" because Silva is one of the deadliest fighters in MMA with some of the best striking the sport has ever seen.

In addition to the headline fight, there are several featured main card bouts including the return of former lightweight champion Frankie Edgar when he takes on Charles Oliveira, and two middleweight titans square off as Mark Munoz faces Tim Boetsch.

In today's fantasy breakdown we look at the key elements for the main card at UFC 162, which goes down this Saturday night:

1)    The key to the main event could easily come down to wrestling vs. anti-wrestling. Anderson Silva's prowess is unmatched on the feet, but if there has ever been a perceived weakness in his game it's his wrestling defense. While he maintains 83.7-percent takedown defense, which lands him third all-time in the middleweight division, it's his fights against Chael Sonnen that lead many to believe he does have a ding or two in his seemingly invincible armor. Sonnen took Silva down at will for the better part of 25 minutes between two fights against the champion. The only problem is Silva finished Sonnen on the ground in their first fight with a triangle choke from the bottom, and adapted his takedown defense in the second fight before obliterating Sonnen with strikes.

Weidman has to know that getting this fight to the ground is where he stands the best chance to come away victorious. He has the highest takedown rate among middleweights, and has only been controlled in his bouts in the UFC for a grand total of three seconds. The only problem Weidman faces? He's taking on the best ever, and Silva has competed against every type of fighter over the years and still comes away victorious. Weidman also enters this fight off a year away from the sport where he dealt with shoulder surgery. The key here is that Silva needs to stay away from any kind of showboating in this fight, avoid the early takedown attempts, and just target Weidman with his complete striking arsenal. If that happens, Silva should be the favorite to win, finish the fight, and add another name to his already record-shattering resume. Because it's a tight fight and the main event, picking the correct winner here will be a huge boost to your overall fantasy score.

2)    Charles Oliveira gets a huge step up in competition when he faces former lightweight champion Frankie Edgar in the co-main event. Edgar enters a three round, non-title fight for the first time since 2009. One other factor that can't be ignored with Edgar is that he's a notoriously slow starter in fights. It happened twice against Gray Maynard during title bouts, although Edgar powered back to get a draw in the first fight and knock out his opponent in the rematch late in the fourth round. On the flipside, Oliveira is the definition of a fast starter. His average fight time is 4:37, and he's never gone to a decision in his UFC career. The problem Oliveira faces is he's never been able to get past top competition. In the three fights Oliveira has had against top ten fighters, he's struggled mightily. He lost to Jim Miller and Donald Cerrone at lightweight, and recently lost to Cub Swanson at featherweight. It doesn't bode well for him that he's now facing a former lightweight champion and a current top contender at 145 pounds. Edgar knows he has to come storming out of the gate because there will be no fourth or fifth rounds to charge back in this time. The safe pick is Edgar, who mixes his wrestling with boxing better than almost any fighter in the UFC, and he can still use his cardio to wear Oliveira down over the course of 15 minutes.

3)    The middleweight bout between former Strikeforce contenders Tim Kennedy and Roger Gracie is a very intriguing matchup on paper. On one side there's Kennedy - a two-time title challenger in Strikeforce and maybe one of the most underrated fighters at 185 pounds. Then you have Gracie - the middleweight with the famous last name who might just have the most dangerous jiu-jitsu game in the sport. Both fighters are debuting, so picking correctly yields an additional 40 points as well. Kennedy will undoubtedly want to keep this fight standing, and he's got enough wrestling to make that happen. He stuffed nearly 82 percent of his opponent's takedown attempts in Strikeforce, and he's spent over 80 percent of his time striking on the feet. This could be a recipe for disaster with Gracie knowing the ground is safe haven. Kennedy will likely look to shuck off Gracie's early takedown attempts and use superior striking late in the first and as the second round wears on to put Gracie away.

4)    It's a battle of strikers when Cub Swanson meets Dennis Siver in a featured featherweight bout at UFC 162. These two fighters both share some of the most impressive statistics when it comes to standing up inside the Octagon. Swanson boasts the second highest striking accuracy in featherweight history, while Siver counters with the third most knockdowns among fighters at lightweight or below. What Swanson has on his side this time around is momentum. In his last four fights, Swanson has looked like an entirely new machine. He's put on blistering performances with wins over Ross Pearson, Charles Oliveira and Dustin Poirier. Swanson is lighting fast and likely won't fall for Siver's favorite spinning techniques (which do catch most opponents sleeping). Swanson is on a roll right now and he should continue, although he might have to do it by decision because Siver won't go away easily.