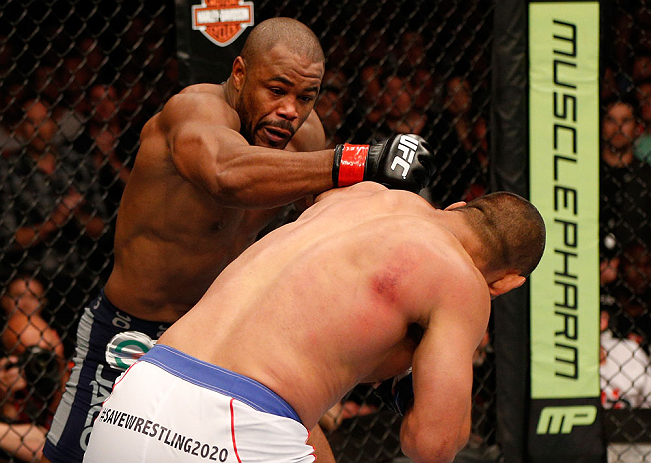 RESURRECTING RASHAD
It wasn’t a highlight reel knockout or slick submission that got Rashad Evans back into the win column for the first time since January of 2012 on Saturday night. And though either of those options would have been nice, the best thing for the former light heavyweight champion’s career may have been the gritty, close three round split decision win he took against Dan Henderson in the main event of UFC 161. Against one of the sport’s true legends, and one who is still very dangerous, Evans had to dig deep, come back strong in the final round, and fight this one out on heart and determination. This wasn’t a win of skill over skill; this was something more, and it’s what the 33-year-old Evans needed at this point after fairly lethargic performances against Jon Jones and Rogerio Nogueira. If anything over the years, Evans has been a thinking man’s mixed martial artist, a cerebral competitor very much in tune with the mental side of the game. On Saturday night, he remembered that he was a fighter, and he fought his way to a win that keeps him relevant in the 205-pound title picture.

THE BIG GAMBLE
The news leading up to Saturday night’s co-main event between Roy Nelson and Stipe Miocic was that “Big Country” decided not to take a contract extension with the UFC, but to instead fight out the last bout of his deal against Miocic at UFC 161. The feeling was that if he won big and took home another knockout victory, his bargaining power would be even greater at the negotiating table. That didn’t happen though, as Miocic scored a one-sided decision win to get back in the win column after the lone loss of his career against Stefan Struve last September. But more than Miocic’s win, people were taking about Nelson’s defeat after the bout, wondering why he would take such a gamble. Well, Nelson’s always done things his own way, and this is just another example, so it shouldn’t be that much of a shock. As for his future, let’s hope he re-signs with the UFC, simply because the best fights for him are still here, and the one that immediately comes to my mind is a slugger’s showdown with Mark Hunt. Now who wouldn’t want to see that?

STIPE AND SHAWN
Mixed martial arts always used to be the haven for fighters who didn’t get thrown under the proverbial bus for losing a fight. In boxing, you can get fed 25-30 journeymen and “opponents” before facing a legitimate test, and if you lose it, you’re pretty much tossed to the scrap heap in terms of TV dates, fan acceptance, etc. In MMA, that was never the case. If you’re fighting the best night in and night out, losses will happen, and it never hurt your quest for a title shot if you were able to get back on your feet and put some key wins together. But there was definitely a sense among a segment of the fanbase that after Stipe Miocic and Shawn Jordan lost to Stefan Struve and Cheick Kongo, respectively, that they weren’t going to be as big as they were perceived to be before those defeats. Then came Saturday night, and with the most important victories of their young careers, Miocic and Jordan are back. And frankly, they never should have been gone in the eyes of the fans or media. Both are talented in more than one area of the sport, are athletic, and here’s the important part: they’re not at their peak yet. That means that as good as they looked in wins over Roy Nelson and Pat Barry, the best is likely yet to come. That’s good for them and bad for the rest of the heavyweight division.

T-WOOD’S LESSON
The good part about Tyron Woodley’s loss to Jake Shields Saturday night? He proved beyond the shadow of a doubt that he belongs with the elite at 170 pounds. The bad part? It was a fight he should have made a statement with and won clearly. For the record, I thought he deserved the decision that went to Shields, but without pressing the action that he was getting the better of more intensely, he basically did this to himself. Woodley was avoiding Shields’ takedowns, and on the feet his punches and kicks were doing the most damage against the longtime welterweight standout. But despite the push from his corner to go on the attack, it didn’t happen. Don’t expect to see the same Tyron Woodley the next time out. This lesson is one that won’t have to be taught a second time.

KRAUSE BRINGS BACK WEC MEMORIES
The talk these last few months – and rightfully so – has been about the success of a host of Strikeforce imports in the UFC. But with his win over Sam Stout on Saturday, a victory that earned him Fight and Submission of the Night honors, James Krause brought me back to memory lane a bit to recall the days of the WEC and when those warriors of the blue cage first made their mark in the Octagon. Krause fought twice in the WEC in 2009, losing to Donald Cerrone and Ricardo Lamas (no shame there), but it wasn’t until he went back to the local circuit that he really hit his stride, going 9-2 before getting a late notice call to replace Isaac Vallie-Flagg against Stout at UFC 161. He made the most of the opportunity, and he did it in WEC style, mixing up his attacks and always looking for the finish. In the third round he got it, and though it may have been a while since the 2011 flood of WEC imports, it was without question a throwback effort to those days. #WECNEVERFORGET