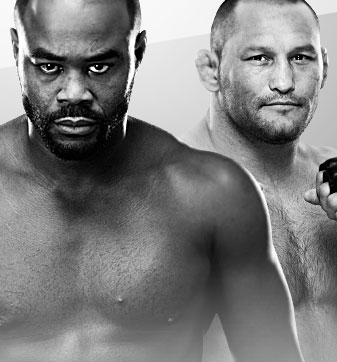 UFC 161 doesn't feature a title fight or number one contender's bout, but there's still plenty on the line Saturday night with some of the top competitors in numerous weight classes taking part in the card going down in Winnipeg.

At the top of the list is former UFC light heavyweight champion Rashad Evans, who hopes to bounce back from two losses in a row when he faces a true legend of MMA in Dan Henderson. Both fighters want to get back in the win column, and this headline fight is the golden opportunity to climb back up the ladder of contention.

Also on the card, rising women's star Alexis Davis tries to stake her claim to the top of the women's bantamweight division, while Roy Nelson looks to add Stipe Miocic's name to his growing list of first round knockout victims.

In today's preview we break down the main card and look at the factors that could make a difference when making selections for the latest round of the UFC Pick ‘Em game at UFC 161.

1) Dan Henderson and Rashad Evans are eerily similar fighters, all the way down to statistics. Henderson and Evans are dead even in almost every statistical category, from strikes landed per minute to takedown accuracy and takedown defense. The two main event competitors at UFC 161 started out their careers as wrestlers before turning into well-rounded fighters. Granted, Henderson's wrestling career reached a much higher level than Evans’, but there's no denying both used grappling as their major weapon early before developing a striking game later. Once they found a home on the feet, both have scored some of the best knockouts in MMA history. Because it's such a close fight, there's an extra 120 points up for grabs to the winner. So where does a fight with such closely matched fighters start to break apart?

Evans has the most takedowns in light heavyweight history, but he's largely gone away from his wrestling in the last few years. Now, it has to be noted that he's recently started work with Olympic gold medalist Kenny Monday, so maybe he'll pick up the singlet again more for this fight, but judging by the matchup, he and Henderson negate each other largely in terms of grappling. So it comes down to striking in many ways and this is where Henderson takes a bit of an advantage. Henderson has gone 38 fights in his career without ever being knocked out. Add to that he's landed the fourth most knockdowns in UFC/PRIDE/Strikeforce history, and Henderson's got the recipe for success on the feet. Henderson also works well within the clinch, which is where he lands the majority of his takedowns, and his power from there is just as deadly. If Henderson can close the distance on Evans early, and keep his faster opponent from darting away, he should be able to land the kind of strikes necessary to either end the fight late or pull out a unanimous decision win.

2) Roy Nelson will be headhunting at UFC 161 and looking for his fourth straight knockout in a row. Nelson took his fight this weekend just a few weeks after his last fight at UFC 159, where he finished Cheick Kongo in the first round. Now he faces Ohio fighter Stipe Miocic, who looks to stop his streak cold in its tracks. Nelson is no fan of the second round, so generally he just goes for the finish early. He's got the third most knockouts in UFC heavyweight history, and the second largest average of strikes landing to the head of anyone in the division. This all spells disaster for Miocic, who faces a raging bull heading into this fight. Nelson attacks early and often, and doesn't mind taking two or three shots to land one big punch of his own. While he didn't get much of a training camp for this fight, Nelson is still fresh off a first round knockout and still carrying plenty of momentum into this one.

3) Alexis Davis is one of the best female fighters in the bantamweight division, and she'll look to prove that on Saturday. A winner in five out of her last six bouts, Davis is a machine that doles out punishment in masses on the ground, while having one of the best chins in the division. Davis is a fantastic grappler with a pedigree in Brazilian Jiu-Jitsu, who will attack any limb an opponent gives up if only for a split second. She's finished her last two opponents inside the distance, and this time around she's facing Rosi Sexton - as tough as they come but not in the same category as Davis on the ground. This could be a dogfight, but expect Davis to take this fight down and look for Sexton to make the one mistake that will put this fight away by submission.

4) The key to Pat Barry's success against Shawn Jordan comes from avoiding the clinch. Barry is one of the most powerful strikers in the UFC's heavyweight division, landing the second most knockdowns and the second most leg kicks in the weight class' history. Barry peppers opponents to the head and legs, but that's where he has to be careful with a strong opponent like Jordan, who has to know staying at a distance in this fight will probably cost him dearly. Barry can be inconsistent in his performances, but he's a finisher who has only seen the judges' scorecards once in his UFC career. He's also not giving up much reach in this fight, unlike many past bouts in the heavyweight division, which bodes well for Barry's style of attacks. If he can put Jordan on the defensive early and stay away from the clinch, Barry should be able to attack with kicks and possibly finish with punches.