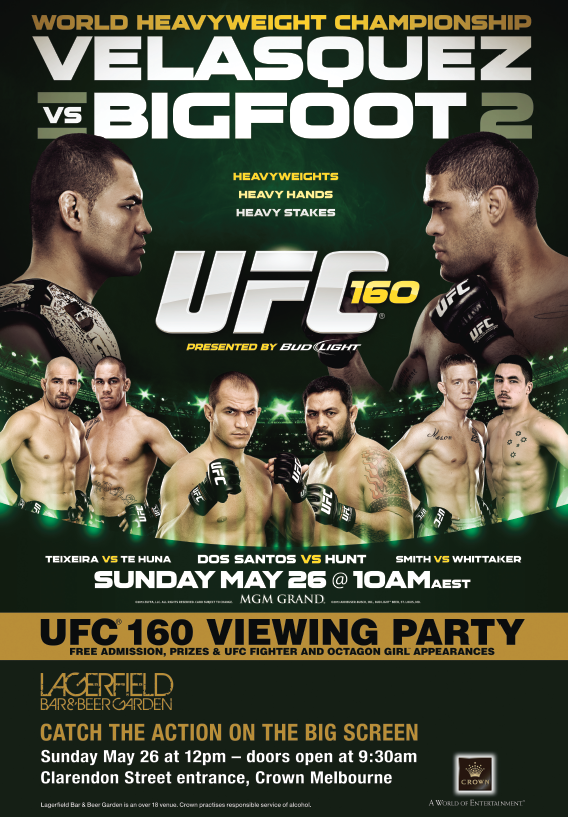 The Ultimate Fighting Championship® and Lagerfield Bar & Beer Garden at Crown will host the ultimate viewing party for UFC® 160: VELASQUEZ vs. BIGFOOT 2 on Sunday, May 26.  Catch all the action on the big screens and meet UFC stars Ross Pearson, Soa Palelei, and Anthony Perosh plus appearances by the UFC's Aussie Octagon Girls, Kristie and Kahili. Free entry and signed UFC merchandise to be won.

UFC fans - don't miss this opportunity to be part of history when the UFC will cross live to Lagerfield Bar & Beer Garden at Crown during the UFC 160 pay-per-view broadcast to see Aussie fans cheer on our heavyweight contender, Mark Hunt in the co-main event, as he steps into the Octagon® against former UFC heavyweight champion Junior dos Santos.

UFC 160 is headlined by a heavyweight title bout against reigning champion Cain Velasquez who will meet Antonio “Bigfoot” Silva in a rematch between two of the sport’s biggest stars. Velasquez and Silva previously met at UFC 146, with Velasquez emerging victorious.

Also on the main card is adopted Aussie, Kiwi fighter, James Te Huna, as he takes on the revered Brazilian, Glover Teixeira.  Coming into the bout on a four-fight win streak, Te Huna will be looking to propel himself into UFC's top ten light heavyweights when he faces knockout artist Teixeira, currently ranked fourth in the weight division.

Fans should arrive early to watch the preliminary bouts that will include Australia's own Robert Whittaker, welterweight winner of The Ultimate Fighter: Australia vs. UK, as he takes on the victor of The Ultimate Fighter Season 16, Colton Smith.  Expect both competitors to be putting it all on the line for this bout as it marks both Smith and Whittaker's first fight following their respective TUF wins.