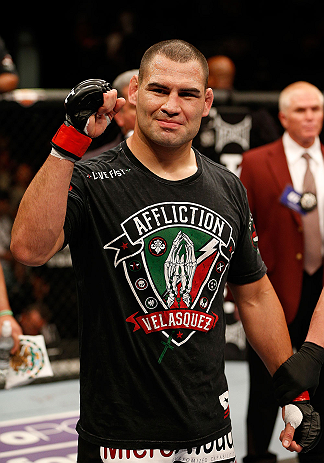 CAIN – UNDISPUTED AND LINEAR???
Now this is what we all expected the reign of Cain Velasquez to look like. In dominating Antonio Silva for the second time Saturday night, the UFC heavyweight champ got the burden of successfully defending his title off his back, and now he can look forward with a clear head as he approaches a third fight with the man who kept him from defending that crown the first time, Junior dos Santos. Velasquez is also starting to project the aura of a fighter that you have to make time to see whenever he’s on the card, a rarity in any combat sports discipline. But to many hardcore fans, the biggest takeaway from Saturday’s win is that Velasquez is now the linear heavyweight champion – if you follow such things. You know, the man who beat the man. According to our ace production coordinator Jason Haddon, this is the progression of the heavyweight crown: Mark Coleman beats Dan Severn for the UFC heavyweight title, Coleman loses to Maurice Smith, Smith loses to Randy Couture, Couture loses to Enson Inoue, Inoue loses to Mark Kerr, Kerr loses to Kazuyuki Fujita, Fujita loses to Coleman, Coleman loses to Minotauro Nogueira, Nogueira loses to Fedor Emelianenko, Emelianenko loses to Fabricio Werdum, Werdum to loses to Alistair Overeem, Overeem loses to Bigfoot Silva, Silva loses to Velasquez. There you go.

JDS’ TRIUMPHANT RETURN
Saturday night’s knockout of Mark Hunt was a big one for Junior dos Santos, and not just because he put himself back in line for a shot at regaining his heavyweight title. It was the way he did after his punishing loss to Velasquez last December. Some fighters wouldn’t be the same after a five round defeat like that, but JDS didn’t just come back, he did it against a knockout artist who could end things with one shot, and he fought him. Sure, he used movement early on and a well-placed takedown during the fight, but he didn’t shy away from exchanges with Hunt, and even though he could have run out the clock in the final round and settled for a decision win, he went for the finish and got it with a highlight reel spinning kick to the head. In the process, he took the idea of a rubber match with Velasquez from the realm of “We need a little time to see this,” to “we need to see this NOW.”

HUNT LOSES A FIGHT, NOT HIS APPEAL
After a tense battle with dos Santos where everyone was on the edge of their seat waiting to see who would fall first, is there anyone out there in the fight world who doesn’t want to see Mark Hunt fight again? Didn’t think so. Despite the defeat, Hunt remains a fan favorite and compelling viewing because when he lands with one of his hammers, it’s still one of the most thrilling moments in sports. So how about a future scrap with a Roy Nelson, an Alistair Overeem, or a Daniel Cormier? And would you count him out of any of those fights?

JONES’ GREATEST THREAT?
I know Alexander Gustafsson and Lyoto Machida are jockeying for position in the race to fight UFC light heavyweight champion Jon Jones, but the biggest threat to Jones’ reign may very well be Glover Teixeira. Fresh from a dominant win over James Te Huna Saturday night, Teixeira has the skill set and the demeanor to test the 205-pound superstar. But don’t expect him to sit around and wait. As he told me before the fight, he just wants to keep fighting, and after four fights in the last 12 months, he’s not kidding.

GRANT MAKES THE MOST OF HIS SHOT
All fighters work hard, and if you make it to this point as a UFC fighter, you’ve paid your dues. But why do I think that a guy like TJ Grant has done a little extra? He’s not flashy, he’s not loud, and he doesn’t put marketing above his training. He’s just a blue collar fighter who shows up to do his job, and when it’s over, he hopes that he’s done enough to move another rung up the ladder. On Saturday night, he knocked out Gray Maynard and put himself on the top of that ladder at 155 pounds, where he will now face champion Benson Henderson for the title. Grant is a fighter’s fighter, and seeing him get to this spot should provide a beacon of hope for competitors just like him, that if you work hard and win fights, you’ll eventually get your shot. And when you get it, you just have to make the most of that opportunity. Against Maynard, Grant did just that.

PYLE AND ROOP MAKE STATEMENTS
Speaking of hard-working veterans, Mike Pyle and George Roop also showed that winners are determined in the Octagon, not on message board forums or on Twitter. Pyle survived some rocky moments against Rick Story to win his fourth straight, and Roop did the same against former WEC bantamweight champ Brian Bowles to take his second consecutive fight since moving back to 135 pounds. The wins should ensure that both get even bigger names in their next bouts, and it may be safe to say that neither will be considered underdogs again.

BERMUDEZ CONTINUES TO PROGRESS
I thought that TUF 14 finalist Dennis Bermudez came up just short of victory in his bout against Max Holloway at UFC 160, but the judges disagreed, awarding him a split decision win. But this has nothing to do with the final verdict. What Bermudez showed fight fans is an unyielding will to win that should be celebrated, despite what you may think about the decision. Bermudez got rocked and took some heavy shots throughout the bout, but he never stopped moving forward, and in the third round he finally hit his groove and looked to have Holloway in trouble. Some guys pack it in when they’re apparently losing in the final round. Bermudez turned up the heat, and you can’t help but respect fighters like that.

WHITTAKER ONE TO WATCH
While the vets of the sport made the Saturday night headlines, rising star Robert Whittaker continued to impress with his third round TKO of Colton Smith. Whittaker has legit power in his hands, he’s cool under pressure, and he’s only 22 years old. Already 2-0 in the Octagon, the New Zealand-born Aussie is going to make plenty of noise in the welterweight division in the coming years.

TYSON
I would be remiss if I didn’t mention the man who several of the fighters on Saturday’s card revered, former world heavyweight boxing champion “Iron” Mike Tyson. In attendance for the weigh ins and on fight night, Tyson was having the time of his life and it was great to see, especially considering the trials and tribulations of his tumultuous life. To know that Tyson still loves fighting is a great thing, and to see the looks on the faces of the athletes he inspired was, well, inspiring.