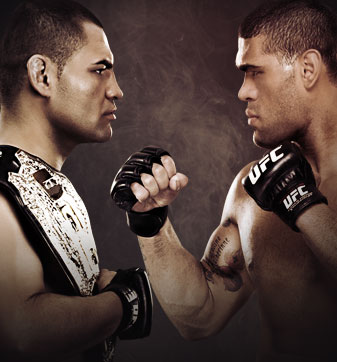 UFC 160 is just around the corner and the big boys will once again take over, with both the main and co-main events featuring heavyweight fighters guaranteed to throw some heavy leather before the night is done.

The featured bout on the card pits UFC heavyweight champion Cain Velasquez against top contender Antonio "Bigfoot" Silva, while former title holder Junior dos Santos looks to earn another crack at the belt when he faces one of the biggest punchers in UFC history in multi-time kickboxing champion Mark Hunt.

In today's preview we'll focus on the main card and some of the major elements that could mean the difference between victory and defeat both for the fighters at UFC 160 and for those playing along in the newest edition of the UFC Pick ‘Em game.

1)    Cain Velasquez is a machine both on the feet and on the ground. The UFC's reigning heavyweight champion doesn't go by the old moniker that big men can't fight for a full 25 minutes without running out of gas. Velasquez has conditioning for days and he proved that with his performance in reclaiming the title when he defeated Junior dos Santos at UFC 155 late last year. Velasquez landed an incredible 111 significant strikes while also managing 11 takedowns during the fight. He can beat an opponent anywhere, and it can't be ignored that he's already faced Silva once before. In that fight, Velasquez took Silva to the mat and bludgeoned him with heavy punches until the bout was stopped in the first round. Another factor working against Silva here is that his strikes are predominantly landed in the clinch or on the ground. Silva strikes in the clinch or on the ground 50.9% of the time, and those two areas seem to play right into Velasquez's wrestling base and style. Velasquez is a nasty finisher and he may put on a similar performance as the last time out against Silva with an early stoppage in the first couple rounds.

2)    On paper it would seem that either Junior dos Santos or Mark Hunt are going to sleep in their co-main event heavyweight title, but the reality may be much different. Both fighters are prolific on the feet, so if a standup fight ensues, fireworks will likely follow. Dos Santos has landed the second most knockouts in UFC heavyweight history, and leads the category for most knockdowns in promotional history. Meanwhile, Hunt is a former K-1 champion with iron in his fists and granite in his jaw. Hunt is a headhunter, scoring a whopping 87.5% of his strikes to the head, and he's never been knocked down since coming to the UFC. In other words, this fight has the recipe to be a striking classic, but it's hard to imagine either fighter going down easily. Dos Santos absorbed the previously mentioned 111 significant strikes from Velasquez in his last fight and was not finished. The advantage would seem to lie in Dos Santos' corner because he's been conditioned for 25 minute title fights for his last three trips to the Octagon, and Hunt's travel issues only landed him in the United States on Monday. Dos Santos will most likely control the distance and stay out of Hunt's power range and possibly mix in takedowns en route to a decision victory.

3)    A new lightweight contender will be crowned between Gray Maynard and TJ Grant, and the Canadian might be the upset special on this card. Grant has gone undefeated since dropping from welterweight down to 155 pounds, and a win in this fight will earn him a shot at the title. Grant is tenacious on the feet, landing with 54.3% accuracy in his significant strikes, and he lands with volume. In his bout with Evan Dunham (a former training partner of Maynard's) he found a home for 164 significant strikes, the fifth most in a single fight in lightweight history. On the ground, Grant is a high level grappler who can strike or submit an opponent at any time. The most telling factor in this fight however might be Grant's ability to match Maynard's size and power. In the lightweight division, few fighters are as big and strong as Maynard, but Grant (after cutting from welterweight) may be one that matches him. Heading into the fight, Maynard is going to be a heavy favorite, but Grant has the style, size and technique to pull off the upset, most likely by decision in this showdown of lightweight contenders.

4)    There is no better way to describe Glover Teixeira than to say he's dangerous everywhere, and that's not a cliché. Teixeira may come into his fight against James Te Huna as one of the hottest prospects in the sport, but he's earned that distinction with an incredible 18-fight winning streak, including three victories in the UFC. Teixeira has 13 career wins by knockout or TKO and another four wins by submission. No matter where this fight goes, Teixeira has a way to end the night for Te Huna, and expect him to do that sometime inside the 15 minute distance.