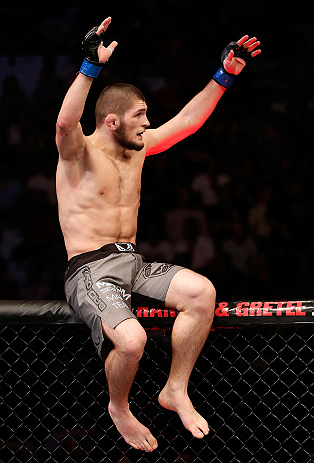 UFC 160 will not only feature a heavyweight title bout on the main card, but the preliminary fights showcase a slew of talented fighters, including some crafty veterans and flashy up and comers.

Mike Pyle looks to add another knockout to his resume when he faces tough as nails wrestler Rick Story, while Dennis Bermudez returns from his Fight of the Year performance against Matt Grice to take on one of the youngest fighters to ever grace the Octagon in Max Holloway.
There are some tremendous matchups on the UFC 160 prelims, and we're going to take a look at the fights that could seriously impact this weekend's UFC Pick ‘Em game.

1)    Dennis Bermudez has a tough act to follow when he fights at UFC 160 - himself. See, in his last fight in the Octagon, Bermudez and opponent Matt Grice put on an absolute classic as the two wrestlers battled all over the cage for 15 full minutes. This time around however, Bermudez has the classic striker vs. grappler fight when he takes on heavy-handed youngster Max Holloway. While his last opponent matched up with Bermudez well in ground skills, he will have a decided advantage in this fight if he wants to take it to the ground. Bermudez is a powerful wrestler with very good takedowns, and while Holloway has shown tremendous defense, blocking 86% of his opponent's takedown attempts, he hasn't faced a wrestler the likes of Bermudez yet. Bermudez will be giving up about five inches of height so he's not going to play around at distance. He'll look to get inside and put Holloway down. Rinse, wash and repeat for three rounds and that equals a win for Dennis Bermudez.

2)    It's a battle of Ultimate Fighter winners when TUF 16 winner Colton Smith takes on TUF: The Smashes champion Robert Whittaker in a featured bout on the preliminary card. Whittaker is a deadly striker who had one of the most devastating knockouts in Ultimate Fighter history when he was on the show. The problem Whittaker will have in this fight is the style that Smith will bring to the cage. Smith is a suffocating - and huge - wrestler who can put opponents on their backs and smother them for a full 15 minutes if necessary. Smith implemented a similar strategy in all of his wins all the way through his season of TUF, including his victory over Mike Ricci to win the tournament title. Smith won't play around with Whitaker's power on the feet, so he'll shoot in early and often to put the Aussie on his back and keep him there. It doesn't have to be pretty; it just has to be effective. Also picking correctly in this one will earn an extra 120 points because of the tight matchup.

3)    If there's a name you should probably learn how to pronounce now before he's a top five-ranked fighter it's Khabib Nurmagomedov. The young Russian fighter may cause more than a few tongue twisters when people try to say his name, and he does the same to his opponent's bodies inside the cage. Nurmagomedov is a powerful fighter at 155 pounds, possessing world-class sambo skills and a rapidly developing standup game to match. Most recently, Nurmagomedov began training full-time at the American Kickboxing Academy, where he works with other top ranked lightweights like Gray Maynard and Josh Thomson. This will only add to his already deadly arsenal. He's got a tough test on Saturday against second time UFC fighter Abel Trujillo, but expect Nurmagomedov to come away victorious once again. He's a star on the rise, and has a tendency to put his opponents down so they don’t see the final judges' scorecards. Trujillo may just become Nurmagomedov's fourth victim in the UFC since his debut in 2012.

4)    Flashy knockout artist Stephen "Wonderboy" Thompson returns to action for the first time in over a year after dealing with injuries that kept him out of the second half of 2012. Prior to that layoff, Thompson made a thunderous debut in the UFC with a head kick knockout of Dan Stittgen before losing a very close bout against Matt Brown in one of the best fights at UFC 145. Thompson isn't a fighter that's felt defeat very often in his career, and the time off only seems to have made him hungrier. He's got a stylistic matchup in his favor this time around because opponent Nah-Shon Burrell enjoys a good standup fight as well. That won't play into his favor however with Thompson employing laser accuracy with his punches and kicks that will literally come from all angles. Thompson is deadly with all four limbs and his knockout blow could come at any point during the fight, possibly leaving Burrell to wake up asking what just happened.