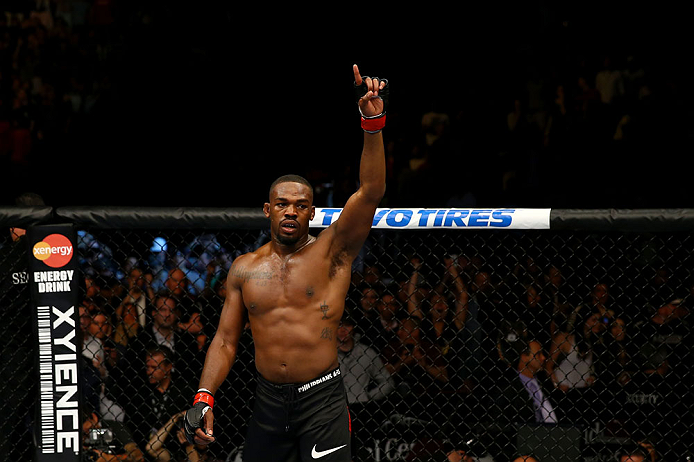 MR. JONES
Guess we’ll be dealing with this Jon Jones guy at the top for a while, eh? Fresh from another dominant performance, one that tied him with Hall of Famer Tito Ortiz for most UFC title defenses at 205 pounds, Mr. Jones is starting to hear that All-Time great talk once again. To his credit, he’s taking it all in with grace and saying the right things, but man, it’s hard not to see that the only thing that may stop him from achieving such a status at this point would be injuries. Then again, he did finish Chael Sonnen off Saturday night after suffering a grotesque toe break, so maybe even broken bones can’t stop the New Yorker. Assuming he’ll be on the shelf for a while to heal up, he’s got either Lyoto Machida or Alexander Gustafsson to look at next, and perhaps those two contenders will fight each other to stay busy while waiting. Well, Jones has already beat Machida, and though Gustafsson is an interesting size and style matchup, he will still enter a title fight with Jones as an underdog. Suffice to say that the future continues to look blindingly bright for the 25-year-old champion.

I KNOW I KNOW
Yes, I am well aware that Sonnen was a sizeable underdog and a contender who did his best work 20 pounds south at middleweight. But what Jones did on Saturday is what you do with a fighter you’re supposed to beat; he got him out of there. There was no dilly-dallying, no attempt to go rounds and show off some new things he was working on in the gym. Jones was all business from the opening bell, and he made a statement that if you sign on the dotted line to face him, do so at your own peril. He fought like a hungry challenger instead of a champion at UFC 159, and the result spoke for itself.

GOODBYE TO THE BAD GUY?
Following his first round loss to Jones, all signs pointed to Sonnen walking off into the sunset and ending his MMA career at the age of 36. And hey, this is a tough sport to be in if your heart and head isn’t in it one hundred percent. But if you look at the landscape at Sonnen’s optimum weight class – 185 – there are still some significant and intriguing fights for the “Gangster from West Linn,” key among them battles with a couple folks he’s waged some verbal scraps with already: Wanderlei Silva and Vitor Belfort. Even at light heavyweight, a fight with Rogerio Nogueira would be an interesting one, as would a meeting with a victor on Saturday’s card, Phil Davis. Of course, there’s no shame in losing three fights to Jon Jones and Anderson Silva, but if Sonnen’s sole goal is to wear UFC gold, yeah, it looks like the odds of him getting another title shot anytime soon are slim. So if Sonnen does retire and move into broadcasting full-time, how will he be remembered? How about like this? He was a hard-nosed wrestler and pressure fighter who fought the best of his era, and though he didn’t always come out on top, he always showed up to fight. And though the late portion of his career garnered more attention for what he said in promoting his bouts, he brought a level of excitement to the game, and by the end, everybody knew his name.

SPEAKING OF PHIL DAVIS…
Despite his stellar wrestling credentials and success in a short time in the UFC, Phil Davis has been underwhelming at times, perhaps not putting on a performance like his Saturday win over Vinny Magalhaes since he submitted Tim Boetsch back in November of 2010. And maybe it was the trash talk with Magalhaes, but more likely it was his greatly improved standup game that saw him draw the rave reviews he was getting on a regular basis in his first year in the UFC in 2010. Davis looked like a complete fighter at UFC 159, and a dangerous one at that. If he can start adding some power to those 1-2s he was drilling Magalhaes with, a serious run at the title may be in the offing sooner rather than later.

BIG COUNTRY DOES IT AGAIN
I know everybody loves Mark Hunt, and for good reason, but for my money, the biggest one punch knockout artist in the UFC hails from Las Vegas, Nevada, and he proved it once more on Saturday with his finish of Cheick Kongo. Telling me before the fight that his work with renowned boxing trainer Jeff Mayweather has him focusing on the second and third punches of his combinations, Roy Nelson only needed a single right hand to put Kongo on the mat, with the another single shot ending matters a second later. That kind of power makes Nelson either a favorite or a live underdog against anyone, and I mean anyone, in the heavyweight division. UFC president Dana White said at the UFC 159 post-fight press conference that Nelson’s future could hold bouts with unbeaten Daniel Cormier or Mark Hunt (should he get by Junior dos Santos at UFC 160 next month), and I don’t know anyone who wouldn’t love to see either fight, making it clear that 2013 could very well be the year of “Big Country.”

FINALLY – A GOOD GUY GETS A BREAK
When talking with Pat Healy before his UFC return against Jim Miller, I joked with him, saying he was almost like MMA’s Charlie Brown, always getting close to that big break before Lucy pulled the ball away at the last second. Last Saturday, Healy kicked that ball through the goalposts, submitting Jim Miller in the third round of a compelling and exciting bout, picking up Fight of the Night and Submission of the Night bonuses in the process. And as much as you want to cheer for Miller every time he steps into the Octagon, it was hard not to smile for Healy, whose career has taken so many twists and turns and gone through so many ups and downs that it boggles the mind. But as you read this today, all is well in the land of Healy, and no one deserves it more.

THE COUNT
One more big win. There I said it. Despite going 2-2 in his last four, I will say that if Michael Bisping gets a big win over a top contender in his next fight, he should get a shot at the middleweight title. His long tenure in the Octagon has earned him that much, and after an impressive win over Alan Belcher, his next fight should put him in line. So who could he beat to convince the fans and the UFC brass that he’s ready? The current top five at 185 looks like this: Chris Weidman, Vitor Belfort, Yushin Okami, Bisping, and Luck Rockhold. Weidman has the next shot at champion Anderson Silva in July, Belfort and Rockhold will meet next month, leaving Okami as the leading available contender. Unfortunately, Okami is a brutal style matchup for anyone, and even if Bisping beats him, it’s likely to be by a war of attrition type decision, not exactly the kind of statement he would need to make. But a fight with the winner of Belfort-Rockhold would be intriguing, especially considering his history with Belfort. A win over either of those two should be enough for him to make his case to battle for the gold.

WHAT’S NEXT FOR SARA?
Sara McMann delivered as advertised against Sheila Gaff Saturday night, using her wrestling and ground and pound attack to score an impressive first round finish. Now the fantasy matchmaking begins for the Olympic Silver medalist, and there are several intriguing bouts out there for her, key among them a scrap with Canada’s Alexis Davis, who first has to get by Rosi Sexton in her Octagon debut in June. Davis is a scrapper of the highest order, she’s won five of her last six, and her only loss came via decision in the best women’s fight I’ve ever seen, her 2012 rematch with Sarah Kaufman. UFC fans who have never seen Davis fight will be in for a treat, and a future bout with McMann could be epic.

THE QUIET RISE OF KID LIGHTNING
Coming in on short notice is no bargain. Ever. Doing so against a tough guy like Johnny Bedford and one who you trained with every day for six weeks makes the upside even smaller. But Bryan Caraway took the UFC 159 fight anyway, and after a slow first round, he progressively picked things up before submitting Bedford in the third. That makes it three of four in the Octagon for “Kid Lightning,” and while he won’t dazzle you with one punch knockouts or flying armbars, he’s a solid and underrated pro who likes to finish. Next up should be a bantamweight contender, and if he beats a top ten foe the next time out, expect people to finally start paying attention.