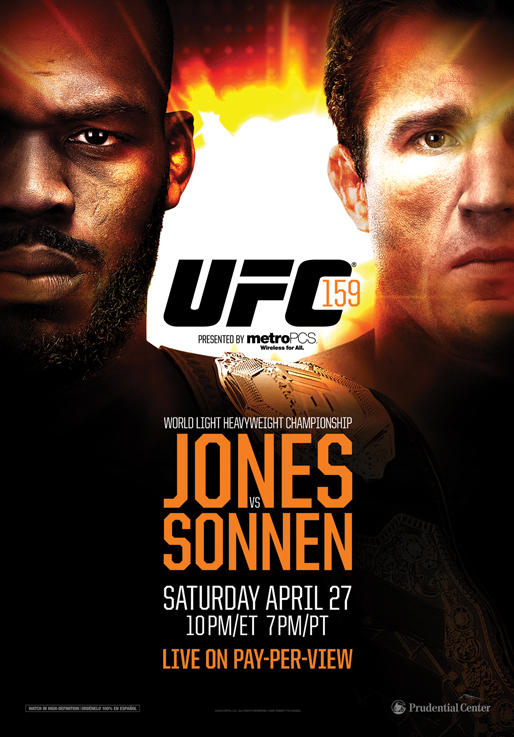 This weekend at UFC 159, light heavyweight champion Jon Jones has a chance to tie Tito Ortiz for the most consecutive title defenses in promotional history at 205 pounds, but he has to get by former middleweight contender Chael Sonnen to do it.

Sonnen will compete for a title in his second straight bout while he seeks to unseat Jones from the top spot in the division.

In addition to the main event, there are several very intriguing bouts on the main card, including a heavyweight bout with fireworks written all over it when Roy Nelson takes on Cheick Kongo and submission ace Vinny Magalhaes battles former NCAA champion Phil Davis.

Today we will take a look at some of the key matchups on the main card for the UFC Pick ‘Em game surrounding UFC 159: Jones vs. Sonnen.

1)    Jon Jones has earned his spot as the No. 2 pound-for-pound fighter on the planet and he's a bad man. Outside of a couple of punches landed by former titleholder Lyoto Machida and an armbar attempt from Vitor Belfort, Jones has looked virtually unstoppable during his entire reign as champion. Looking specifically at the matchup with Sonnen there's one statistic that will probably come to the forefront in the opening moments of the fight—Jon Jones has never been taken down in the UFC. None. Zero. Zilch. His opponent is a wrestler who takes down almost everybody at will. Can Sonnen take Jones down? Well the smart money is not likely given Jones' long reach and a wrestling background of his own. Add to that Jones' uncanny ability to finish from anywhere and the safe bet lands on the champion putting Sonnen away sometime in the first three rounds.

2)    Roy Nelson is a headhunter and he's deadly with his aim. The former Ultimate Fighter winner lands a remarkable 85.1 percent of his strikes to the head and he's got the knockouts to prove he's connecting with power on those shots as well. Nelson has knocked out Brendan Schaub, Stefan Struve, Mirko Cro Cop, Dave Herman and Matt Mitrione since coming to the UFC and he could add Kongo to that list this weekend. Kongo's best chance to control Nelson comes from the clinch, where he's landed more strikes than any fighter in UFC history. Still, Kongo has been on the wrong end of a few knockouts in his career, including a defeat to Mark Hunt - who has a frame and power similar to Nelson. It's obviously a different fight, but if Nelson connects early it could be goodnight for the Frenchman.

3)    The smart money at UFC 159 probably lands on light heavyweight Phil Davis when he meets former Ultimate Fighter finalist Vinny Magalhaes on Saturday night. An NCAA champion in wrestling, Davis has put every single opponent he's faced in the UFC on their back at some point, and he may have some of the most explosive takedowns in the business. In this fight however he may become the anti-wrestler because when facing a jiu-jitsu artist like Magalhaes, the ground could be a bad place to land. Magalhaes is a multi-time submission grappling champion and will look for the finish any time an opponent allows him to grab a hold of a limb. Now, Davis has only allowed one serious submission attempt during his UFC career, but if there's a fighter that will test it again, Magalhaes is the man for the job. Magalhaes also earns 175 points as an underdog, so it may be worth keeping an eye on him for Saturday night.

4)    One does not simply beat Jim Miller in the UFC. The New Jersey native has lost three times since coming to the UFC. Those losses have come to Benson Henderson (current champion), Gray Maynard (current top contender) and Nate Diaz (fought for the title in 2012). What does that tell you? Miller feasts on fighters trying to earn their name off of him. He's beaten every single contender that's stepped in his way outside of those three fights and he'll look to do the same when Strikeforce transfer Pat Healy steps into the cage on Saturday night. Miller is the definition of blue collar in the Octagon—relentless with takedowns (put nine out of 12 opponents on their backs when he's attempted to take them down), he's a submission machine (second most submission attempts in UFC history) and his striking comes in bunches and he never slows down. Healy is a tough customer and his one loss at lightweight comes by submission to Josh Thomson in a fight he was controlling through two rounds. Look for this one to go to a decision, but with Miller coming out on top.