Michael DiSanto looks back at UFC 158... 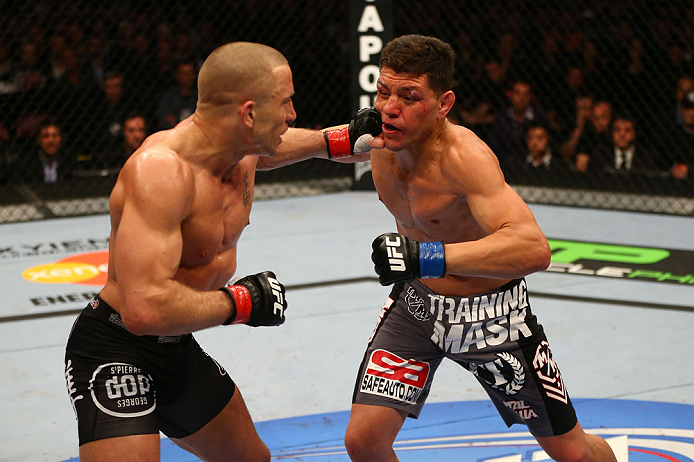 Georges St-Pierre continues making history with each fight. His win over Nick Diaz tied the champion with Matt Hughes for the most wins in UFC history (18). He also became the most decorated welterweight champion in UFC history, with eight total defenses of the welterweight championship (8). His eight consecutive defenses of a UFC title are second only to Anderson Silva and he is the standard bearer for the welterweight division. Oh yes, he also now has 11 wins by judges’ decision, which is yet another UFC record.

Yet, there is something about his current standing that makes me hesitate when thinking about a super fight between him and pound-for-pound kingpin Anderson Silva.

Does anyone actually think that GSP has any shot at beating Silva? I certainly don’t. I think the Canadian would get knocked out if he made the mistake of moving north to try and solidify his standing in the mythical pound-for-pound rankings.

Don’t misinterpret those words. GSP is the single greatest welterweight to ever step inside the Octagon—bar none. Why does he need to move north? He isn’t a particularly large welterweight. And he still has plenty of legitimate welterweight challenges ahead of him—namely Johny Hendricks and Jake Ellenberger.

I just don’t see what he would gain by moving north to fight Silva, except for a severe headache for a few days.

Have I mentioned how much I love to listen to a Diaz interview? His stream-of-consciousness approach to the media is a refreshing change from the predetermined, hollow answers offered up by most professional athletes. And his commitment to his own version of reality is unyielding, unlike fictional, WWE-style trash talkers who just want attention.

Diaz keeps it real all day, every day, regardless of the audience or their openness to what he has to say. Everyone should respect that.

This week, Diaz offered up an interesting perspective on GSP, claiming that the champion was “selling wolf tickets” with his claimed commitment to handing Diaz the worst beat down in the history of the sport. You know what? Diaz was correct. GSP was selling wolf tickets. He is always selling wolf tickets when he talks about destroying an opponent. That is OK because mixed martial arts is a sport, not a street fight.

GSP is close to the perfect fighter. Not because he has the perfect skillset. Because he perfectly utilizes the skills that he possesses. He fights with equal commitment to offensive control and defensive focus. His goal is to hit, but not get hit. He wants to control, without risking getting controlled. As a result, he owns several UFC records.

I know. I know. GSP isn’t the flashiest fighter to watch. He isn’t going to keep you at the edge of your seat because of the imminent threat of explosive violence, like Anderson Silva. But that doesn’t make him any less effective at his craft. And he certainly is no less dominant, albeit in a different way.

Sure, GSP is selling wolf tickets. I’m not eating them up, either. I know what time it is when GSP fights. A UFC record 11 wins by judges’ decision, including five straight, tells you all you need to know. GSP is a sportsman who is committed to completely shutting down an opponent with technical brilliance, and he does that as well as anyone who has ever competed in the sport.

Really? Nick, are you serious?

I acknowledge that GSP beat him more convincingly than any of Diaz’s recent opponents. But retirement? That seems a bit extreme to me.

Diaz remains one of the best fighters in the world, pound for pound. Losing to GSP doesn’t change that, particularly the way that he lost.

Let’s be honest for a moment. GSP beat him. But he didn’t beat him up. GSP suffered more physical damage than Diaz did. He absolutely deserved a 50-45 win. No doubt about it. There is also no debating the fact that Diaz did as well against GSP as any opponent since Matt Serra.

Keep fighting, Nick. You love to hate mixed martial arts. And many fans love to hate you. Whatever the case, this is your calling.

“BIG RIGG” HAS TO BE NEXT

Johny Hendricks put it on Carlos Condit, and he did it with what appeared to be a broken left hand.

Hendricks is now 15-1, with six straight wins in the UFC. He is the clear number one contender in the welterweight division. Scoring a solid win over Condit erases any doubt as to who should be next in line for the champion.

Nate Marquardt got blasted by Jake Ellenberger, who scored the single-most impressive win anyone has ever delivered over “Nate the Great.” It suggests that Ellenberger is title ready. In fact, I’ll write for certain that he is title ready. The only problem with him getting the next shot is Johny Hendricks.

I’m not sure I’d favor anyone in the UFC over Ellenberger, except for guys who can put him on his back—and are fully committed to doing so from Jump Street.

WHAT WAS RING THINKING?

Is there any reason why Nick Ring insisted on fighting the entire fight with his hands hanging comfortably at his sides? I can’t recall the last time that I’ve witnessed a top UFC competitor fight for three full rounds with his hands down. Roy Jones Jr. and Floyd Mayweather Jr. both carved out soon-to-be Hall of Fame careers out of fighting that way. But that was boxing, not mixed martial arts. Plus, Ring doesn’t have the hand speed those guys possess. He needs to get his hands up in his next bout. It will both improve his defense and also create shorter pathways to touch his opponent’s mug.

Mike Ricci is finally competing in his natural weight class. His first UFC win was a workmanlike effort. But it was a win nonetheless. If I may be so bold as to offer some constructive criticism, Ricci needs to put his punches together a bit more. Almost everything he threw was of the one-and-done variety. He had a couple of two-piece combinations. Nothing of significance beyond that.

In addition, he needs to figure out a way to keep his left hand high when throwing a left kick. Ricci drops it every single time that he throws a kick. If he keeps that up, somebody is going to step into the kick and blast him with a straight right (or a right hook, if he is facing a southpaw).

Ricci otherwise looked great. Lightweight is definitely the right division for him.