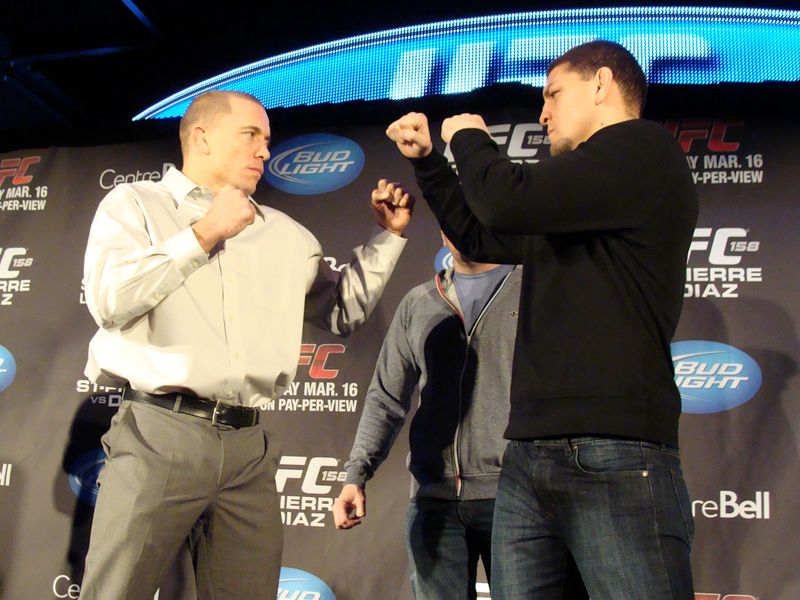 The grudge match to end all grudge matches takes place at UFC 158 when welterweight champion Georges St-Pierre finally comes face-to-face with Stockton bad boy Nick Diaz to settle the score once and for all.

UFC 158 actually marks the third time St-Pierre and Diaz have been scheduled to fight, but now it's days away and a reality that two of the best 170-pound fighters on the planet will face off with the gold up for grabs.

In addition to St-Pierre vs. Diaz, there are a host of other top welterweights filling out the main card as well as several undercard fights that come with some intriguing circumstances attached to them. Let's take a look at a few key elements for the UFC Pick ‘Em game ahead of UFC 158: St-Pierre vs. Diaz:

1) Georges St-Pierre is as good as advertised. The UFC's reigning and defending welterweight champion has been ranked at or near the top of not only his own division’s rankings, but the pound-for-pound rankings for years and there's a reason why. St-Pierre may be the most dynamic, athletic and explosive fighter in all of MMA, and the stats back it up. He has the most strikes landed, the most takedowns and the highest takedown accuracy in UFC history. St-Pierre's attacks can come from anywhere, and because he's quite possibly the best wrestler in MMA today, he's always got a takedown lurking in his back pocket. Only a few moments in his entire career has St-Pierre even looked vulnerable, much less look weak in a fight. Nick Diaz is as tough as they come and he puts pressure on every opponent, landing more strikes at a distance than any fighter in UFC history by a wide margin. Still, Diaz's aggression and step forward policy could come back to haunt him in a big way against St-Pierre. The takedowns and control of St-Pierre will make him a very popular pick to win by unanimous decision on Saturday night.

2) Jake Ellenberger faces Nate Marquardt in a pivotal welterweight matchup on Saturday with the winner jumping right into contender status in the division. On paper, these two fighters are as evenly matched as any in the UFC. Both have phenomenal takedowns (Ellenberger the 2nd highest takedown accuracy at welterweight, Marquardt 2nd in the entire UFC in takedown accuracy). Both have knockout power (Ellenberger has the 3rd most knockdowns in welterweight history, Marquardt has the 2nd most knockdowns ever in a single fight). What could separate these two is time – Ellenberger has been preparing for this fight for months while Marquardt took this bout on a few weeks’ notice after a brutally hard fight against Tarec Saffiedine in Strikeforce. Look for Ellenberger to come out strong and put damage on Marquardt early and often to see if he's truly ready for this fight.

3) One interesting debut fighter that could earn some extra points is Bobby Voelker, who makes his first Octagon appearance after fighting under the Strikeforce banner. Voelker has a tough test in former UFC middleweight contender Patrick Cote, but it is the Canadian’s first time cutting down to 170 pounds, and that can cause issues for a fighter on their initial attempt. Add to that, Voelker has nasty punching power and has faced an equally gifted fighter named Roger Bowling three times (Voelker won by knockout in two of those fights). Voelker has to be wary of Cote's power, but for a debuting fighter he's the one to keep an eye on for this card.

4) Darren Elkins is a machine at featherweight. Since dropping down to 145 pounds, Elkins has been all but unstoppable, and while he faces a crafty veteran in Antonio Carvalho at UFC 158, it's his fight to lose. Elkins is a phenomenally strong wrestler with great top control. The biggest key for Carvalho is stuffing the takedown, which few have done thus far against Elkins.

5) Another heavy favorite to keep an eye on at UFC 158 is former Ultimate Fighter finalist T.J. Dillashaw. The Team Alpha Male fighter is really starting to come into his own at 135 pounds since exiting the reality show and he's looking for his third win in a row on Saturday. Dillashaw is an explosive wrestler with concrete in his hands and a quickly developing standup game as well. He trains with former WEC champion Urijah Faber and it shows in his fights because Dillashaw really is a close carbon copy to the "California Kid." Dillashaw faces veteran Issei Tamura, and while he's no slouch, this is a tough test for him, especially since he's coming off a loss in his last fight. Dillashaw could be the smart pick and he's only seen the three round distance twice in his career.