Michael DiSanto takes a look back at UFC 156... 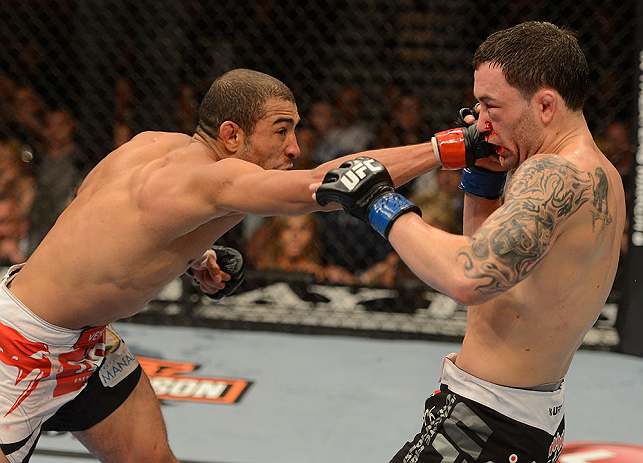 ALDO CEMENTS HIS PLACE AMONG THE ACTIVE GREATS

On paper, at least, former lightweight champion Frankie Edgar appeared to be the toughest challenge of Jose Aldo’s career to date.

Aldo handled Edgar no differently than he did Kenny Florian, Urijah Faber, Mike Brown and all the others who have faced him in the UFC and WEC. In fact, Saturday night was his 15th consecutive win. That is a remarkable streak in a sport where parity is the order of the day.

At this point, Aldo has completely cleaned out the featherweight division. Granted, I believe that Dustin Poirier is the guy I’ve got my eye on as the future of the division. But he recently lost to the “Korean Zombie,” Chan Sung Jung, so a title challenge isn’t imminent.

Dominating the division like Aldo has over the last few years leaves no doubt that he is among the very best in the sport, across all weight classes. He is so good that I literally don’t give any other featherweight much of a chance at defeating him in the near future, if I’m being honest.

Shortly after Aldo’s big win, top lightweight competitor and former 155-pound WEC champion Anthony Pettis claimed that he would drop down a weight class if the UFC would give him a shot at the champ. That is an extremely interesting matchup.

But let’s not get ahead of ourselves just yet. It wasn’t that long ago that Edgar was viewed as a clear top-five pound-for-pound candidate. That makes Aldo’s win that much more impressive. He should enjoy the moment and then ask himself whether he wants to face Pettis at featherweight or possibly move up to lightweight and try to become the first man in the history of the UFC to simultaneously hold two championships.

THE REEM LEARNS A HARSH LESSON; THE REST OF THE SPORT LEARNS A VALUABLE ONE

Alistair Overeem was dominating Antonio Silva through two rounds with technical brilliance. He was making the fight look just as easy as he claimed it would be in the weeks leading up to the bout. Overeem was not shy about referring to “Bigfoot” as a warm-up bout. The Brazilian was nothing more than a way to shake off the cage rust after 13 months out of action before “The Reem” faced Cain Velasquez for the heavyweight crown.

Then, Silva came out and turned the third round into a bar fight. Twenty-five seconds later, Overeem lay slumped on the canvas. It was his first loss since September 17, 2007, and undoubtedly the most costly loss of his professional career.

There will be no bout with Velasquez around the corner. Overeem now needs to rehabilitate his status among the very best, something I’m sure he will do with a devastating win or two. After all, the last time Overeem lost, he was knocked out. It took nearly six years for it to happen again.

Conversely, Silva is now extremely relevant in the heavyweight division, something that was a pretty farfetched thought after he got obliterated by Velasquez in his UFC debut. The problem, of course, is Velasquez’s win over him was so dominant that it is tough to imagine a rematch unfolding any differently, though a few more wins and the UFC will have no choice but to grant him that wish.

Rankings aside, the way Overeem-Silva ended should be a very vivid teaching lesson to everyone in the UFC—literally everyone.

First, Overeem’s hubris is what cost him the fight. Silva seemed like nothing more than a sparring partner when Overeem relied on his technical skills. The minute Silva devolved the action into a brawl, the worm didn’t just turn. It turned and bit with the jaws of a great white shark.

Had Overeem shunned the invitation to plant and swing in barroom fashion, he would be thinking about his upcoming bout with Velasquez right now.

The obvious lesson to learn is to never shun technique in favor of a rock-em, sock-em exchange when winning the fight.

Second, Silva’s heart is what won him the fight. He knew he was down on the scorecards entering the third and final round. He had no chance of winning, absent a knockout or submission. What did he do? He rushed to the center of the cage and fought like a wild man.

Silva punked Overeem into brawling with him by challenging his manhood, both with words and his actions. Overeem took the bait hook, line and sinker. But for Silva’s decision to throw caution completely to the wind, his bank account would be much lighter right now, and his record would have one more loss on it.

Lots of fighters know they are down on the cards, with no chance of winning a decision, when the final round begins. Few truly do anything about it. Even fewer really let it all hang out, risking getting knocked out themselves, in search of a dramatic, come-from-behind victory.

The obvious lesson to learn is to embrace the old adage “with great risk comes great reward.”

Rashad Evans is one of the most talented fighters in the sport. From his athleticism to his technical skill to his amazing fighting IQ, this guy doesn’t have many peers. Yet, he has been underperforming since he won the UFC 205-pound title back in 2008.

Evans started his career in the UFC as a heavyweight who didn’t have much chance at stopping the big fellas, so he fought to survive and win at the same time. He carried that mentality with him when he dropped to the light heavyweight class. A split decision win over Sam Hoger and then a majority decision win over Stephan Bonnar. Those are good results, but they don’t suggest a future champion.

Out of nowhere, everything changed.

He followed those sleepy wins with a knockout over the then-highly touted Jason Lambert. It was a spectacular finish, one that turned around Evans’ career path. He went from sleepy victor to must-see TV overnight.

Four fights later, Evans turned in a Knockout of the Century performance against Chuck Liddell to earn a shot at the UFC title. “Suga” won the title by knockout in his next fight, making him one of the top stars in the sport.

Then, everything changed again. This time, however, they changed for the worse.

Evans lost the title by sudden, dramatic knockout to Lyoto Machida in his first defense. He has never been the same since. Sure, he is 4-2 since losing the title, but his only stoppage win was against a faded, over-the-hill Tito Ortiz. Each of the other bouts saw a safety-first Evans do what was necessary to win, but not really press for a finish. He went from must-see TV to, well, less than thrilling.

Evans lost on Saturday night to Rogerio Nogueira in a fight that probably could have gone either way. But it was the same sort of sleepy effort, where the former champion seemed unable to pull the trigger, that has plagued him in recent years.

Could the loss turn out to be a good thing? I don’t know. Something needs to change for Evans. He is far, far too good to turn in performances like he did on Saturday night, where he appears hesitant and defensive.

Where is the knockout king? We need to put out an APB, because the world is dying to see that Evans step into the cage. If Evans would commit to aggressively letting his hands go, like he did back in 2007 and 2008, he would be a handful for anyone in the world. That is the guy who can win a title, whether at 205 or 185 pounds. Bring that guy back, please.

ARE YOU PAYING ATTENTION GSP?

Demian Maia is now 3-0 after dropping to the welterweight division. He has looked better and better in each of those three bouts, culminating in a career-best performance againt Jon Fitch.

If anyone claims they knew Maia would be able to take down Fitch, they are lying. Period. Hard stop.

Fitch is one of the most effective wrestlers in the sport. Yet, he repeatedly found himself on the canvas trying to survive Maia’s ground wizardry. Make no mistake about it. Fitch trained extensively on keeping the fight on the feet, and he still couldn’t do anything to prevent Maia from putting him in the one position he wanted to avoid at all costs.

I personally think Maia is now easily positioned among the top five or six guys in the division. And I think his skills may present the single biggest test for champion Georges St-Pierre among the current crop of contenders.

That may sound crazy, since Maia has only competed three times in the division. But fans must remember that Maia was once the top contender at middleweight. His skills have long been on display inside the Octagon. We know precisely what he brings to the table.

What does he bring? The best BJJ in the sport.

Before Saturday night, I would have completely discounted Maia’s ground game as a significant factor in a matchup with GSP because I didn’t believe he had the ability to take the action to the ground. After watching him repeatedly put Fitch on his back, I’m not so sure anymore.

Eliminating takedowns from GSP’s game, because the champ wants no part of dealing with Maia’s offensive guard, trust me on that one, changes the effectiveness of GSP’s standup.  Adding the possibility of the Brazilian scoring a takedown completely changes the entire complexion of a matchup between these two.

Of course, GSP has to get past Nick Diaz before anyone should spend too much time talking about GSP-Maia. A win over Diaz is far from guaranteed.  But if the champ does survive the brash Stockton native, then a bout with Maia presents some intriguing possibilities.

In my opinion, Johny Hendricks is the number one contender at welterweight. Maia shouldn’t jump him in line, unless he stumbles against Jake Ellenberger next month.

And there is also some guy named Anderson Silva hanging out background, as well, as a possible future opponent for the champion in a bout that would likely be the biggest event in the history of the sport.

I think the perfect next fight for Maia to establish his place in the pecking order would be the winner of the upcoming bout between Rory MacDonald and Carlos Condit. That matchup would tell us all we need to know about Maia’s proper place in the championship queue.