What are the keys to victory for Cain Velasquez this Saturday in his UFC 155 main event against Junior dos Santos? Michael DiSanto breaks them down... 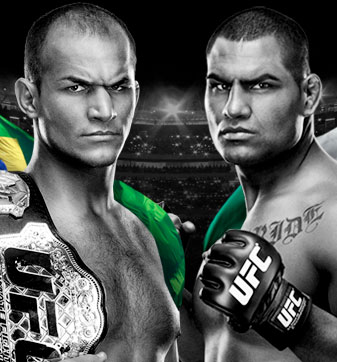 Cain Velasquez knows what it is like to reach the top of the mixed martial arts mountain.

On October 23, 2010, Velasquez knocked out Brock Lesnar to win the UFC heavyweight championship. It was a coronation of sorts. From the day he entered the sport, those close to him loudly proclaimed that Velasquez would one day become a champion.

Lots of fighters claim they will one day be champion. But this was different. It wasn’t Velasquez who was claiming he would win the heavyweight crown. It was his trainers and training partners—probably his early opponents, too.

Head trainer Javier Mendez was so bullish on Velasquez before he even made his UFC debut that he told me he firmly believed the former Arizona State University wrestler would someday go down as the greatest heavyweight in the history of the sport. Javier supports his fighters, but he is also honest to a fault when assessing someone’s skills and potential. That is why I was so taken aback by the statement.

Velasquez was nine fights into his professional career when he won the title. One fight later, he lost it in particularly brutal fashion. On Saturday night, he gets the opportunity to avenge that loss when he squares off for a second time against the only man who has ever beaten him—Junior dos Santos.

At stake, once again, is the UFC heavyweight championship. Only this time, Velasquez is the challenger. “Cigano” is the reigning champion.

If Velasquez wants to get his title back, he needs to get back to his roots and take the fight to the ground.

Velasquez is a former elite-level collegiate wrestler, earning All-American honors in both his junior and senior seasons at ASU. Those credentials give him the best wrestling pedigree in the division, now that Lesnar has retired. He needs to rely on those skills, just like he did in his last fight against the ultra-dangerous, and seriously oversized, Antonio Silva.

Velasquez engaged Silva on the feet just long enough to open the door for a takedown. That is precisely what he should do on Saturday night.

Taking down dos Santos is easier said than done. The champion has successfully defended nearly 90% of the takedown attempts thrown his way. Thus, it probably wouldn’t behoove Velasquez to rush across the ring and dive in for a takedown. Dos Santos will be expecting that, so it won’t work.

Velasquez needs to wade into the heart of darkness with the best striker in the division and exchange a bit in order to set up takedowns. That is a scary thought, since dos Santos knocked out Velasquez in just 64 seconds in their first fight. It is Velasquez’s reality nonetheless.

The obvious key for the challenger is to use his great lateral and upper body movement to minimize the opportunities for dos Santos to plant his feet, sit down on his shots and bomb away. Velasquez is among the best in the division with his footwork and quickness. Darting in and out in rip-and-run fashion is just what the doctor ordered.

Notice that I wrote “rip and run,” rather than “hunt and peck.” It is ultra important that Velasquez fire with conviction when he does engage. He needs to force dos Santos to raise his hands in defense or to back straight up. Either of those will open the door for the challenger’s brutally effective double-leg takedown.

If he throws timidly, by contrast, dos Santos will stand in the pocket and fire laser-like counters. Any one of them will have enough firepower to bring the fight to an instant end.

Another key to getting the fight to the ground is fully committed kicks. That is something Velasquez does as well as just about anyone in the division not named Pat Barry. He threw haphazard leg kicks in their first bout. This time, he needs to fire them with bad intentions.

In other words, Velasquez needs to use full hip turn when he fires right kicks to his foe’s lead leg and body. When he does that, his kicks land with tremendous speed and power. Dos Santos’ stance, which employs a wide base, with his shoulders almost perpendicular to his foe and weight sitting down, is well suited to firing right hands with maximum force and also defending takedowns. But it is not great for checking leg kicks.

For safety, the kick should be thrown as the second or third piece of a fist-led combination. Even the best kickboxers in the world struggle to effectively defend leg kicks thrown at the end of fistic combinations. And Velasquez is masterful at finishing up combinations with leg kicks.

A series of fast, hard leg kicks will rapidly sap dos Santos of his power because he won’t be able to fully plant and fire onto his left side. More importantly, a damaged lead leg makes it tougher to sprawl and brawl.

If dos Santos isn’t able to effectively sprawl, then the odds of Velasquez winning increase dramatically. Trust me. The champion wants no part of fighting from his guard, despite the fact that he holds a black belt in Brazilian jiu-jitsu, because Velasquez has a savage top game and excellent submission defense.

Velasquez has tremendous hips thanks to his deep amateur wrestling background. He is an expert at using his hips to keep an opponent on the ground, without having to rely too heavily on his arms. That frees him up, a la Randy Couture, to hammer away with his fists.

Ask “Bigfoot” Silva what life is like trying to defend Velasquez’s ground-and-pound assault. It’s neither fun nor pretty.

If Velasquez is unable to get the fight to the ground in the opening minutes, he should not panic. Dos Santos has never shown any issues with his cardio. Yet, he still doesn’t want to get into a cardio contest with Velasquez because this guy has a gas tank that would make the Energizer Bunny salivate.

Velasquez needs to keep busy with lots of lateral movement with his rip-and-run strategy. He needs to continue working for takedowns. That is an excellent way to tire out the champion. A tired champion is a champion who can be taken down. And a champion who gets taken down by Velasquez will likely become an ex-champion.