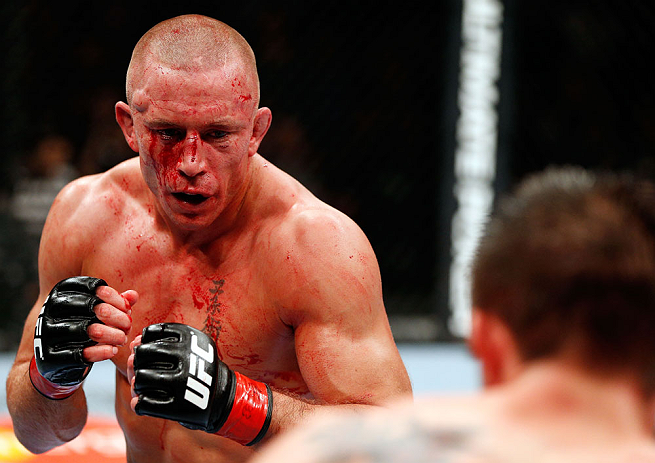 JUST ANOTHER DAY AT THE OFFICE

Georges St-Pierre probably feels like he was in a car wreck right about now.

I’m quite sure that his head is throbbing. His hands are undoubtedly sore. His muscles are still filled with lactic acid. And his face…well…let’s just say he won’t be posing for any photo shoots until the swelling subsides and the cuts heal.

There is no doubt that GSP was in a fight on Saturday night. There is also no doubt that Carlos Condit presented the most formidable challenge that the champion has faced in quite some time. Condit badly hurt GSP in the third with a spectacular head kick. It was probably GSP’s scariest moment since getting knocked out by Matt Serra.

Yet, if we are being perfectly honest with ourselves, it was a very one-sided fight. GSP dominated from bell to bell. He even expertly recovered from the thunderous head kick to dominate the majority of the round. I scored the third 10-10, by the way.

The nearly 19-month layoff due to a torn anterior cruciate ligament certainly left GSP less than razor sharp, and he definitely tired a bit more quickly than usual. Nonetheless, I think GSP’s performance was spectacular, all things considered. Let’s not forget that he had one of the most talented guys in the sport trying to take his head off for 25 minutes.

Fans looking to find fault with his performance will probably point to the fact that we are coming up on the four-year anniversary since GSP last stopped an opponent. Then again, he faced Thiago Alves, Dan Hardy, Josh Koscheck, Jake Shields and Carlos Condit during that period. That is about as close to Murderer’s Row as we have in the UFC. The mere fact that he ran through those guys in dominant fashion, albeit needing the judges to tell him that he won, is a remarkable feat. Criticizing him for not stopping one or more of them borders on absurd.

I know. I know. Everyone wants to talk about the 600-lb elephant in the room right now. 347 words into the piece before the name Anderson Silva appears. I’m saving my thoughts on that one for its own op-ed piece tomorrow because I have plenty on my mind.

IS HENDRICKS THE TOP CONTENDER?

Johny Hendricks desperately wants to receive his first shot at UFC gold. On Saturday night, he made an extremely compelling argument that he deserves to be next in line.

Hendricks folded up Martin Kampmann with what appeared to be a left hand thrown from less than the proper distance. Heck, the shot didn’t look like it landed cleanly. Yet, Kampmann was left in an heap on the canvas.

For those watching the fight, I’m sure they reacted like I did.  WOW! This guy has amazingly devastating power in his left hand.

Hendricks has quietly put together a string of victories that is difficult to ignore. Five straight wins. His last three opponents—Jon Fitch, Josh Koscheck and now Kampmann—have long been viewed as top contenders in the division. Yet, Hendricks dispatched each of them.

It’s time for the former Oklahoma State University wrestling superstar to fight for the title. He has earned it.

Francis Carmont secured the first victory of the main card telecast for the Canadians. But I’m not sure the judges got it correct. It was a tough fight to score. I’ll just leave it at that and move on.

Well, I’ll move on in a minute.

The split decision win extended Carmont’s winning streak to nine fights, including four inside the Octagon. He needs to up the effort to toss his name into the middleweight mix. But he isn’t far behind at this point. Do you think he won the fight? I want some honest opinions in the comment section below.

Now, I will move on.

Mark Bocek probably thought that Rafael dos Anjos was just what the doctor ordered to extend his current winning streak to three and also get the first Canadian victory of the telecast. After all, he cited his foe’s Brazilian jiu-jitsu as a weakness that he could exploit. Bocek made those statements knowing that dos Anjos was a BJJ black belt.

It was an interesting pre-fight comment from a fighter who is known as being extremely technical. Whether Bocek’s BJJ is significantly better than dos Anjos’ remains to be seen. His takedowns weren’t good enough on Saturday night to find out. As a result, dos Anjos is the one who extended his winning streak to three, and Bocek didn’t stop the Canadian slide that opened the card.

At the end of the day, both of these guys have the skills to make a difference in the division. Yet, the Brazilian is the one who has been able to step up in big moments. Bocek has come up short each time he has faced a true A-level opponent. Frankie Edgar, Jim Miller, Benson Henderson, Mac Danzig and now dos Anjos. Those are Bocek’s UFC conquerors.  Not a bad crowd for dos Anjos to be associated with.

HOMINICK KNOWS WHAT HE NEEDS TO DO

Mark Hominick has been in lots of memorable fights in the UFC. This guy is one of the more exciting fighters on the roster, pound for pound. The problem, however, is Hominick struggles from his back, as he showed against Pablo Garza. That was the lone reason that he lost the fight. Well, that and his inability to stop takedowns.

Garza has excellent ground skills. It wasn’t surprising to see him control the action once it hit the canvas. Yet, I was surprised at how easy it was for him to take Hominick down. Maybe it was an off night for the Canadian. Maybe Garza is just that much better. I don’t know. Whatever the case, Garza easily won the fight.

Hominick needs to shore up his guard and takedown defense, if he wants to truly make a difference in the featherweight division. If not, he will still be unbelievably exciting. I just don’t think he will rise to the top of the division.