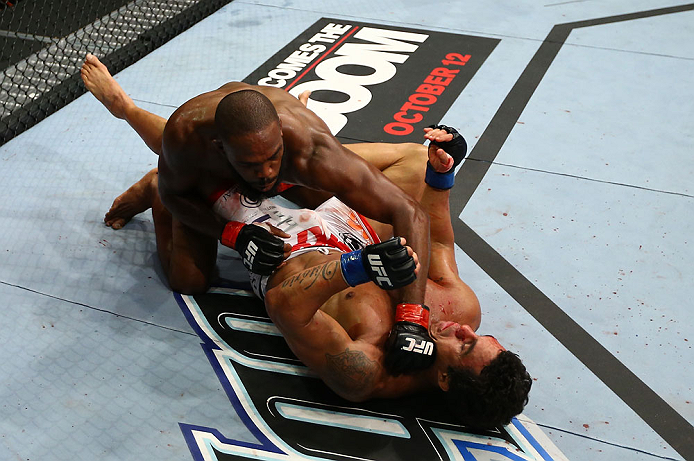 JONES CONTINUES TO MAKE HIS ‘BONES’ AS CHAMPION

Jon Jones is such an amazingly gifted fighter that he makes his job look easy. In five championship fights, he has faced Mauricio “Shogun” Rua, Quinton “Rampage” Jackson, Rashad Evans, Lyoto Machida and Vitor Belfort. All five of those individuals are former champions. Jones dominated each one of them.

Read that list of names again. Are you starting to comprehend how impressive Jones has been so far in his career?

For my money, Saturday was the most impressive effort of the champion’s young career to date. Shutting down Belfort was something that most expected. Yet, nobody expected that Jones would have to survive unbelievable adversity in order to win the fight.

The first-round armbar that Belfort slipped into place was picture perfect. When Jones attempted to stand and pull out, it actually allowed Belfort to further crank the hold. The challenger acknowledged that he heard the ligaments and tendons in the elbow popping as it was torqued into a grotesque position.

Jones was done for all intents and purposes at that moment. He should have been, at least. But he didn’t quit. He refused to tap, accepting that his arm was about to break, which would have led to an instant stoppage. Still, he refused to shortcut what seemed to be the inevitable. If Belfort wanted his belt, the Brazilian had to rip Jones’ arm off.

Jones eventually got out of the hold. Only time will tell how much damage the armbar caused him, so I’m not sure that hanging on like that was necessarily the smartest career decision. Nevertheless, it answered one significant question that Jones had yet to be asked by an opponent in his career:  How will Jon Jones react when he faces significant adversity in a fight?

The answer:  Stay calm, remain patient and continue looking for a way to win.

You can’t teach that sort of heart and conviction to victory. Guys either have it or they don’t. Jones has it.

WHAT IS NEXT FOR JONNY BONES?

Despite only having four successful title defenses under his belt, it already seems like Jones has completely cleaned out the 205-pound division. His last five fights have been against a murderers row of opponents. Regardless, three names are conspicuously absent from his conquered list.

No disrespect to Shogun, Machida, Jackson or Evans, but Jones annihilated each of those guys. None of them did anything to suggest that a rematch would turn out any differently.

Phil Davis is a name that has been bandied about. But he was completely shut down by Evans. I know that just because A beats B and B beats C doesn’t mean that A beats C. But Jones is better than Evans at every aspect of the game. Thus, in this one instance, the logic tree seems to apply.

That just leaves the three aforementioned names. Let’s take a look at them one at a time.

Henderson is in the midst of a career rebirth. He has won seven of his last eight fights, including what many consider the best run of his professional career over his current four-fight unbeaten streak.  Henderson arguably has the perfect style to score the upset. He is a former Olympic wrestler, so it seems unlikely that Jones will be able to take him down with the same ease that he has experienced with each of his other opponents. Hendo has an iron chin, so he can take two or three strikes from Jones in order to give one back. And Hendo arguably has the single-most devastating right hand in the history of the division. The best part about the potential matchup is the fact that Jones is already asking to fight him next. That makes Hendo the most likely next opponent.

Gustafsson is an interesting choice. The 25-year-old Swede is next in line after Jones in terms of most potential in the division, in my opinion. He is in the midst of a five-fight winning streak, so he appears to be peaking for his first title shot. This guy is tall, long and has exceptional boxing skills. The problem with Gustafsson is his lack of wrestling. Davis exploited that hole in his game a few years ago and used it to grind out an impressive victory. It seems logical that Jones could do the same thing. Yet, with Gustafsson’s boxing skills, anything can happen, if Jones opts to stand and strike with him.

Silva versus Jones. Need I say more? This would be an enormous event, one that could potentially solidify Silva’s claim as the best ever, regardless of what he does in his career from that point forward (or if he retires). The problem is that neither man seems overly interested in fighting the other right now. Silva is focused on Georges St-Pierre, assuming the pound-for-pound king gets past Stephan Bonnar next month and GSP defeats Carlos Condit in November. It makes sense for Silva to prefer GSP in the short term because that is a much easier matchup for him strictly based on their respective physical sizes. But a win over GSP will instantly shine a spotlight on Silva-Jones.  The problem, of course, is that Jones has repeatedly shrugged off the question of facing Silva. Is there a hint of intimidation there?

I’ll make this quick and dirty. The odds makers showed Vitor Belfort absolutely no respect when they set the odds for the UFC 152 main event. They treated him as a sacrificial lamb being served up to further the reign of the sport’s chosen one.

All Belfort did was come closer to defeating Jones than anyone else in the champion’s career. Not bad for a guy who many thought would be nothing more than a punching bag. Not bad at all

Belfort’s performance absolutely solidifies his position as a top contender back in the middleweight division. I don’t care that he got dominated after the first round. He nearly ripped off the champion’s arm in the first. Team Belfort should be very proud of their man’s effort.

Fans either love or hate Michael Bisping. Very few appear indifferent about the brash Brit. Yet, all should finally acknowledge that this guy is ready for his first crack at a UFC championship. His dismantling of a very game Brian Stann vividly demonstrates that point.

Bisping should be enjoying a six-fight winning streak. He is, instead, on a one-fight winning streak because he was robbed against Chael Sonnen back in January. Now that he has added Stann as a victim, it is tough to argue that anyone is more deserving of a chance at 185-pound glory than “The Count.”

Yes, I know that Chris Weidman looked great against Mark Munoz. But Bisping should have back-to-back wins over Sonnen and Stann. That makes for a better justification for a title shot, in my opinion.

WILL STANN EVER TAKE IT TO THE NEXT LEVEL?

Brian Stann is a well deserved fan favorite. The guy brings it each and every time he steps into the cage. He is a war hero. And he is one of the nicest, most genuine guys you would ever be fortunate enough to meet, according to those close to him.

Oh yes, he also happens to be an extremely talented mixed martial artist.

A guy like that is going to have a long, lucrative fight career. The question, however, is will he ever become a champion?

Stann has now come up short in both of his bouts against top-of-the-food-chain middleweights.  Sonnen outwrestled him. Bisping simply beat him. Those two bouts raise a question about the affable middleweight’s competitive ceiling.

Stann turned 32 years old today (happy birthday, big fella), so he is certainly in the midst of his fighting prime. Does that mean he has reached his ceiling? There is a good argument that he has, indeed, become all he can be. After all, most UFC athletes aren’t making any further transformative improvements by the time they turn 32.

Stann may be one of the exceptions to that rule. He is a latecomer to the sport, so he remains very much a work in progress at this stage in his career. I have seen significant improvement from Stann with each and every fight, other than at UFC 152. Bisping is either that much better than him, or Stann has started to regress a bit with his footwork and striking creativity.

For the record, I think his performance was more about how good Bisping really is than any slippage or plateauing of Stann’s skills. I think this guy will find a way to earn a title shot in 2013. Can anyone say Stann-Weidman, assuming Weidman gets past Tim Boetsch at the end of the year? That seems like a perfect “next in line” bout behind Bisping in the championship queue.