Michael DiSanto takes a look back at UFC 150 and its aftermath... 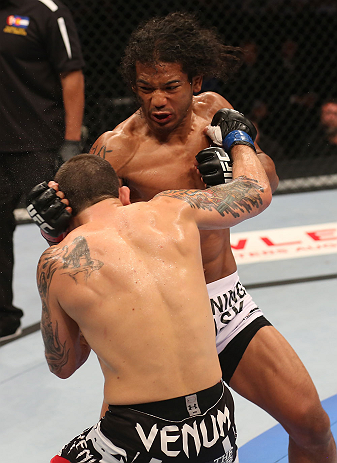 Benson Henderson is done dealing with Frankie Edgar—for now, at least. His split decision win gives him back-to-back victories over the former champion. Despite the fact that both bouts were extremely close, with Saturday’s arguably ending in a controversial decision, it seems unlikely that Edgar will receive a third opportunity at Bendo any time soon. That makes perfect sense, from a sporting perspective. But it is hard to suggest that there has been any real closure for the Bendo-Edgar saga.

I’m not suggesting that the judges got it wrong. The fight was close enough where neither man has a legitimate complaint no matter how the judges scored it. Both are probably wondering why they didn’t press a little harder in search of a more conclusive ending, particularly Edgar, who wound up on the short side of the scorecards.  It’s tough for him to complain too vigorously about the decision because he never really left his comfort zone in an attempt to clearly pull ahead of his opponent.

NATE DIAZ IS NEXT

Nate Diaz is a perfect 3-0 since he returned to the lightweight division. He won a post-fight bonus in each of those bouts—once getting the nod for Fight of the Night and twice for Submission of the Night. He will be next up for champion Benson Henderson, according to UFC president Dana White.

I think Bendo-Diaz is a spectacular matchup. Bendo has the clear wrestling and strength advantages. Diaz is the better striker and a far superior submission artist. Sounds like a good matchup for the Stockton native, doesn’t it? Will Nate be the first of the Diaz brothers to win UFC gold? We will find out soon enough.

Frankie Edgar looked a full weight class smaller than his opponent on Saturday night. That wasn’t surprising because he looks smaller than his foe in every fight. But this was after the former champion claimed he had added some much needed muscle in the months leading up to the bout.

I don’t know for certain, but I’m guessing that Edgar still cuts less than 10 pounds for the fight. If I am correct, he is still far too small for the lightweight division. That may read like crazy words to some because Edgar has already climbed to the top of the lightweight mountain, and he did it by defeating one of the greatest fighters in the history of the sport, B.J. Penn. Not once, but twice.

That doesn’t matter to me. It is tough to argue that Edgar’s lack of size didn’t hurt him on Saturday night. I’ll take that one step farther. His lack of size hurts him in every fight. Ten of his 13 UFC bouts have gone the distance. That is far too much time spent in the cage because those miles accumulate over time, resulting in very real wear and tear that can prematurely end the prime of a fighter’s career.  The lack of finishes either suggests that Edgar is a poor finisher or he is just too small to finish his foes. I’ll bet on the latter, not the former.

If Edgar drops to 145, I think he will be one of the bigger, stronger fighters. It will allow him to utilize his wrestling a bit more than he can at lightweight. Smaller opponents will also suffer a bit more from the power of his punches.

Of course, there is no guarantee that he will win the title at featherweight, despite having spent time as the lightweight champion. Why? Some guy named Jose Aldo. Look him up, if you don’t already know.

CERRONE IS ONE BAD DUDE

How many of you thought the fight was over when Melvin Guillard put Donald Cerrone on ice skates early in the first round? I certainly did. I didn’t think there was any way that Cerrone would recover in time to survive what seemed certain to be a savage Guillard assault in search of a knockout.

Well, I was correct. The fight did end moments later. The only issue with my assumption seconds into the fight was that I assumed Guillard would be the one standing with his hand raised. Instead, he was left lying on the canvas-covered floor thanks to a perfectly timed Cerrone counter—one that was probably thrown on pure instinct due to a very cloudy head at the time.

Cerrone is now 6-1 since the UFC acquired the WEC. His lone loss came in lopsided fashion to arch rival Nate Diaz almost a year ago. With Diaz standing in the front of the championship challenger queue, a strong argument can be made that Cerrone deserves to be standing immediately behind him.

Cerrone mentioned after the win over Guillard that he remains interested in fighting fellow 155-pound shining star Anthony Pettis. That could be the perfect title eliminator for the winner of Bendo-Diaz.

SHIELDS GETS THE SHIP IS GOING IN THE RIGHT DIRECTION

Jake Shields was widely considered to be the best fighter in the world who wasn’t under contract with the UFC back in 2010. It was a fair assessment because he was on a five-year, 14-fight winning streak that culminated with the destruction of surefire future Hall of Famer Dan Henderson in a Strikeforce middleweight title bout.

Then, everything changed when Shields arrived in the UFC. He dropped back down to welterweight after nearly 18 months of competing 15 pounds to the north. I don’t think Shields grasped how difficult that would be. Stripping his body of all the added muscle undoubtedly impacted his cardio in an adverse manner. He looked completely exhausted for much of the bout in his UFC debut against Martin Kampmann. Shields barely escaped with a win that night.

He put on a much better showing against Georges St-Pierre in his next bout, but Shields still came up short. It was his first loss in his last 16 fights. He followed that bout with a 53-second knockout loss to Jake Ellenberger, something that most thought was unfathomable just months earlier. It was the first time Shields had been stopped in more than a decade. The former Strikeforce two-division champion certainly gets a complete pass for that outcome because he had just lost his father a few weeks earlier.

Shields scored a solid unanimous decision win against Yoshihiro Akiyama five months later. But he again appeared to tire prematurely compared to his pre-UFC performances. And he certainly did not appear to be as dominant as he had in the past. Thus, the Cesar Gracie team fighter opted to move back to middleweight.

Saturday was his middleweight debut. Although his win over Ed Herman wasn’t pretty, it was just what the doctor ordered. There was no doubt when the bout was over who had won. Herman proved to be an extremely tough opponent. Anyone who has been watching the sport for the last five or six years knew that he would be. Shields prevailing in a grueling, clinch-filled fight suggests to me that he is in the right weight class.

I expect Shields to build upon this effort in his next fight as he re-acclimates to the return of the extra 10-15 pounds of muscle. While he hasn’t yet lived up to the great hype that surrounded him when he entered the UFC, I think he will make a very real run at fulfilling those expectations over the next year.