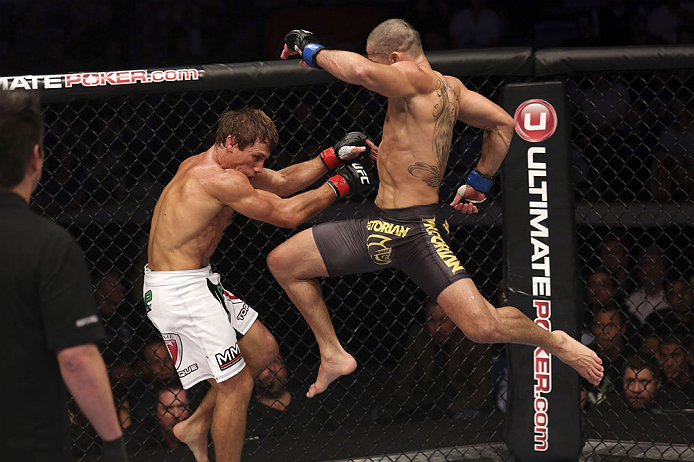 DOES THE BARAO ERA START NOW?

Renan Barao entered his first UFC title shot riding a title wave of hype. He was in the midst of the longest current unbeaten streak in the sport. UFC commentator extraordinaire Joe Rogan dubbed him the best fighter in the world without a title. And he is a training partner of featherweight kingpin and pound-for-pound candidate Jose Aldo, who just so happens to own a shutout win over Barao’s interim championship opponent at UFC 149, Urijah Faber.

It wasn’t a big shock, therefore, that the Brazilian fighter entered Saturday’s bout as the betting favorite.

That is a ton of pressure for a first-time title challenger. Some quietly felt that it would be too much for the 25-year old contender to handle. Barao obviously forgot to read the memo because he not only beat Faber, he did it in dominant fashion.

His performance at UFC 149 suggests that this guy’s ceiling is every bit as high as his rabid supporters suggested heading into the fight. Now is it up to the new interim champion to reach that ceiling, which means remaining supremely focused on improving his weaknesses (everyone has them) and further sharpening his strengths through the same gym rat dedication he has shown so far in his career. It means staying off the Internet, to a degree, to avoid buying into his own hype. It means continuing to train with Aldo, who is the one person in his camp who can continue to push him to greater and greater heights.

Let’s face it, Barao is the interim bantamweight champ, but we are still in the midst of the Dominick Cruz era. That remains true until someone defeats the true champion or he walks away from the sport. The only reason he wasn’t in the cage against Faber on Saturday was a blown ACL.

It is likely that Cruz will be out for another 10 months or so, as he continues to heal from his surgery and then rehabilitate himself to full strength. That is plenty of time for Barao to get in a couple of title defenses. I think he should do just that. Remaining active is the key to continued growth as a young fighter, and Barao is certainly still young, despite his wealth of experience. Plus, that is a great way to build the anticipation for the Cruz matchup, assuming he can win those couple of defenses.

Was UFC 149 the beginning of the Renan Barao era? I’m not sure, but I do know one thing. Dominick Cruz is champing at the bit to find out.

WHERE DOES FABER GO FROM HERE?

With the loss to Barao, Faber has now lost his last five UFC / WEC championship bouts. One would be hard pressed to find another fighter in a Zuffa-owned company who has lost five consecutive title bouts. What that says to me is that Faber remains among the best in the world, because he certainly continues to earn championship opportunities, but he may no longer be the best in any particular weight class.

I’m sure the blogs and forums will be full of opinions about Faber hanging up the gloves. After all, losing five consecutive title fights is truly unprecedented. If he is no longer championship caliber, then there is no reason to continue fighting, right?

My reaction? Stop it, guys.

It is preposterous to think that fighters only compete for championships. That may be true for a select few who are financially secure for life, so the only reason to risk personal safety is the glory of being the best.  Everyone else fights to pay the bills. Sure, they have championship aspirations – many do, at least. But these guys also have mortgages or rent, car payments, retirement accounts to fund, college funds and the like to deal with.

Competing in the UFC is a profession, no different than being a doctor, lawyer, salesman or professional athlete in any other sport. Do you wake up in the morning and decide to change careers just because you may never become the CEO of your company? That is ludicrous. Should the tenth man on the Minnesota Timberwolves hang up the hoop shoes because he will neither win an NBA championship or become the league’s MVP anytime soon, if ever? No.

Faber should continue fighting for as long as it makes financial sense for him to do so, he still enjoys it and there aren’t any abnormal health risks. Guess what? I’ll bet he earns another title bout before it is all said and done, too. At least one more, possibly winning the 135-pound belt. A third fight with Cruz is still a very marketable fight, if Cruz gets past Barao (assuming nobody else gets to the interim champ first) and Faber scores another win or two. Why? Because the “California Kid” is just that good, and he has more than earned it.

LOMBARD SHOULD DROP TO WELTERWEIGHT

Hector Lombard entered the UFC with just about as much hype as Barao had heading into his first title fight. The former Cuban Olympian was riding an unbelievably impressive 25-fight winning streak (which, interestingly enough, is longer than Barao’s winning streak, though not longer than the Brazilian’s unbeaten streak – you figure it out).

Then, he laid an egg.

OK, to be fair, he didn’t really lay an egg. Tim Boetsch is far from a middleweight gatekeeper. Boetsch beat him, just as much as Lombard failed to execute (which, again, probably had a lot to do with Boetsch).

We can pontificate all day on whether debut jitters played a role. It is an interesting question because Lombard was far from the Mike Tyson-like attack-at-all-cost offensive fighter who terrorized the smaller promotions before coming to the UFC. Was he injured? Was it just a bad night? Or is Boetsch simply the better fighter?

I’ll let you guys take on that debate in the comment section below and elsewhere in Internet land. I’d rather bandy about a different question – should Lombard drop to welterweight?

I’m sure I’m not the only one who noticed that Lombard looked a full weight class smaller than Boetsch. “The Barbarian” is a big middleweight, but certainly not the biggest in the division. I had a feeling that would be the case when I noticed at the weigh-ins that Lombard insisted on putting his shoes back on before squaring off with his opponent. The size differential was certainly not apparent once he had the aid of another inch from his shoes. But it was glaringly apparent when the two squared off inside the cage.

At 5’9, Lombard is one of the shortest middleweights in the promotion. In fact, he would be a relatively short welterweight. I look to former UFC star Phil Baroni as a comparison. Baroni was a massively muscled middleweight with a welterweight’s frame (or maybe even lightweight, if we’re talking solely on height and reach). That is Lombard in a nutshell.

If Lombard can cut to 170 pounds without adversely impacting his strength and explosiveness, he could be an absolute savage in the welterweight division. If I were a betting man, and I just so happen to be one, I’d bet that he could easily make the welterweight limit with just a few tweaks to his training camp diet. He looked extremely thick with full, round muscles and a full face at the weigh-ins. Contrast that to Faber, who looked like he had squeezed every safe ounce of water out of his system for the weigh-ins before adding back nearly 18 pounds in the 30 hours leading up to fight time. Lombard can do the same thing.

At welterweight, Lombard won’t have to deal with the same size, reach and strength issues that he faced against Boetsch, though the last of those certainly wasn’t an issue at all. With this guy’s insane core strength, sick judo skills, jiu-jitsu black belt, and show stopping power in his punches, George St-Pierre probably hopes the big fella stays in the middleweight division. By contrast, I think he should drop to welterweight.

What do you think?

RIDDLE DEMONSTRATES THE BEAUTY OF JIU-JITSU

I’ll keep this one short and to the point. Matthew Riddle’s submission win over Chris Clements was my favorite moment of UFC 149—and I’m a guy who prefers striking to submissions.

The way he used Clements’ missed spinning backfist to step in and secure an arm-triangle was about as beautiful of an ending to a UFC fight that I can remember. He locked himself into position while the pair was still battling on the feet, used the leverage for a quick leg trip, and then squeezed his way to a victory.

That sequence demonstrates the beauty of jiu-jitsu, in my opinion. Sure, Ryan Jimmo’s seven-second knockout win over Anthony Perosh was insanely impressive. But Riddle’s submission win (and again, I’m a converted boxing guy) is the sequence that I replayed on my DVR 25 times today. It was poetry in motion. A Picasso moment inside the cage. And the embodiment of Brazilian jiu-jitsu, all rolled into one.