Michael DiSanto checks in with his take on last Saturday's UFC 146 event... 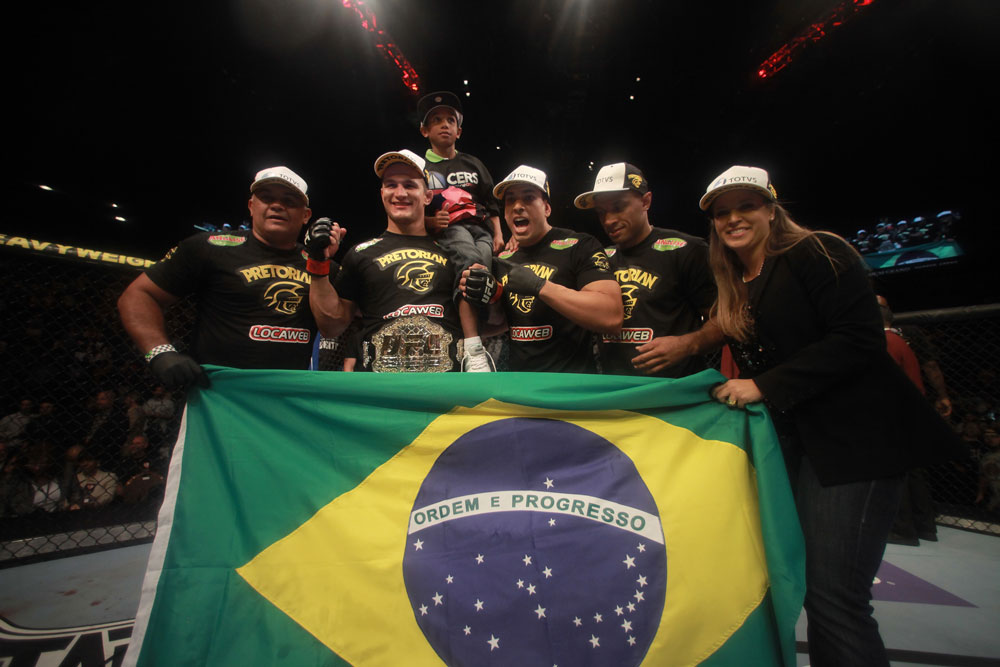 JDS GETS VELASQUEZ NEXT

I’ve written it again and again. Excellent fighters may win a title, but only truly great ones actually successfully defend their title.

Move Junior dos Santos into the “great” category because he not only successfully defended his title. He did it in thoroughly dominant fashion against one of the best heavyweights the world. Two title fights. Two knockouts against amazing opponents. Yes, JDS is a great heavyweight.

It wasn’t surprising for the fight to end in a knockout, once it became clear that Mir was not going to be able to get the fight to the ground. I think it was more surprising that Mir lasted well into the second round in what was basically a boxing match.

Next up for the champion is a rematch with Cain Velasquez, who made a statement of his own in the co-feature bout – see below. I was salivating over JDS versus Alistair Overeem and was grossly disappointed when “The Reem" wasn't licensed for the bout. After watching JDS and Cain put their respective stamps on their foes, I think I’m even more excited about JDS-Velasquez II. I’m not sure what will happen when the two lock horns, which will presumably happen later this year barring injury, though I suspect that it will last longer than 64 seconds.

Frank Mir has competed in five UFC title bouts, making him one of the most accomplished heavyweights in the history of the sport. Sure, he got blasted out in a standup-only affair with JDS. None of that changes his standing in the sport. Mir, like everyone else in the sport, is human. He is beatable. But only a small handful of humans on the planet can claim to hold a victory over him.

The former champion is now 7-3 in his last 10 fights. Brock Lesnar. Antonio Rodrigo Nogueira, twice. Roy Nelson. Mirko Cro Cop, Cheick Kongo. Antoni Hardonk. Look at the breadth of skills across those names. Lesnar, at the time he faced Mir, was probably the best heavyweight wrestler in the promotion. This was before diverticulitis sapped him of his explosiveness. Mir took him out with his amazing ground game. “Minotauro” Nogueira is one of the most well rounded heavyweights in the history of the sport. Mir knocked him out and then broke his arm in a subsequent bout. Nelson, Cro Cop and Kongo each got handled on the feet, and, well, Hardonk just got outclassed.

It is rarely pretty when someone loses. Mir’s loss to JDS was no exception. But this guy is far from being at the end of his professional rope, unless, for whatever reason, he chooses to walk away. I don’t see that happening any time soon. At 33 years old, he is now in the prime of his career. I expect to see more great things from Mir over the next couple of years.

If anyone thought that Cain Velasquez was going to turn into a shrinking violet after suffering the first loss of his career, think again. The former champion put on a career-best performance against Antonio Silva in a fight that had to erase the sour taste of defeat that had lingered since his loss to Junior dos Santos six months ago.

Velasquez looked extremely motivated to make a statement. Word out of San Jose since his loss has been that Velasquez was training like a savage. He always trains like a savage, but he turned it up a notch after he lost the title. It certainly showed on Saturday night.

Silva looked completely outclassed during the fight. Velasquez caught his first kick, used it to take him down, and then proceeded to toss him a major-league whuppin’.

Velasquez’s performance put him front and center for a quick title opportunity. As mentioned, he will face JDS next in a rematch for the title that the Brazilian took from Velasquez. I can’t wait to see that one.

ROY IS ONE BAD MAN, BEARD AND ALL

Roy Nelson doesn’t look like a fighter – the silly full beard and enormous (albeit shrinking over the last couple of fights) belly. But he certainly is a fighter. Belly or not, Nelson is a devastating heavyweight, with extremely heavy hands, an iron jaw underneath those crazy thick whiskers, and an extremely effective ground game. The only thing that stands in the way of greatness for this guy is his size – height (6’0) and weight (254 pounds). The two just don’t go together. In terms of height, he is probably an average middleweight. Yet, he fights the biggest men in the sport night in and night out – and his weight is certainly well above average for a UFC heavyweight.  I’ve written it over and over, so why stop now? I wonder how good Nelson would be if he actually found a four-pack of abs and plied his trade in the land of the light heavies. Of course, that is never going to happen, so I guess I should leave that one in “what if” land. I guess that makes Nelson’s heavyweight successes that much more impressive.

LAVAR HAS A “BIG” HOLE IN HIS GAME

Lavar Johnson is one of the more entertaining heavyweights in the world – if you like slugfests. He is also one of the most effective in that part of the game. The problem, of course, is that this isn’t boxing or kickboxing. It’s mixed martial arts. And striking is only half the game.

Johnson received a rather painful reminder of that reality when he suffered a quick submission loss to Stefan Struve. “Skyscraper” vividly exposed Johnson’s lack of ground game when he pulled guard and quickly transitioned into an armbar for the victory.

It was obvious what was coming the moment Struve pulled guard. Anyone who pulls guard with a tight overhook on an arm is looking for an armbar. Johnson knows that. Yet, he chose to remain in his opponent’s guard and try to score with some ground-and-pound, rather than pulling out and returning to his feet. He paid a very dear price for that mistake. All the crazy momentum Johnson created with his first two UFC fights – both knockout wins, both won “Knockout of the Night” – is now gone. And it seems pretty obvious that he needs to focus solely on his submission and takedown defense in the short term.

If he can shore up those holes in his game, Johnson will be a beast in the heavyweight division. He already is one for anyone who dares stand and trade with him.

That is the number of days that elapsed since Dan Hardy last heard his name announced as the winner in a professional fight. Back on November 14, 2009, he shocked the world by announcing his UFC relevance with a shocking win over then-highly touted welterweight contender Mike Swick.

Since that date, Georges St-Pierre, Carlos Condit, Anthony Johnson and Chris Lytle each defeated the brash Brit. Four straight losses typically result in a fighter heading to the smaller shows to work out the kinks. Not for Hardy. He worked them out in the gym during a brief hiatus before coming back with the most emphatic win of his career.

Knocking out Duane Ludwig is a serious accomplishment because this guy is one of the best strikers in the division. Hardy not only beat him to the punch; he did so with great confidence and technique. He has always had plenty of the former, but often fought without the latter. It looks like his move to Las Vegas to sort out his fighting career was the right decision.

I can’t remember the date for certain. I think it was late 2006. I was talking to John Hackleman, who was then training the baddest man on the planet, Chuck Liddell, at the peak of his reign of terror over the 205-pound division. He said, “Remember this name: Glover Teixeira.”

Teixeira was in the WEC at the time. His career record was 4-2. If anyone other than Hackleman had touted the guy, I probably would have ignored the tip. There aren’t many guys sporting a 4-2 record in smaller shows who turn out to be monsters in the UFC. But Hackleman is one of the most respected trainers in the sport, and he is a guy who has always been brutally honest with me – no hyperbole, fluff, just the straight and narrow.

Now I understand what he was talking about. Teixeira is an absolute monster. He masterfully undressed Kyle Kingsbury in his UFC debut, a debut that has been delayed several years due to visa problems. Those problems are gone, and Teixeira is here.

Let’s see if he lives up to the hype created by Hackleman nearly six years ago. Saturday night was one heck of a good start.