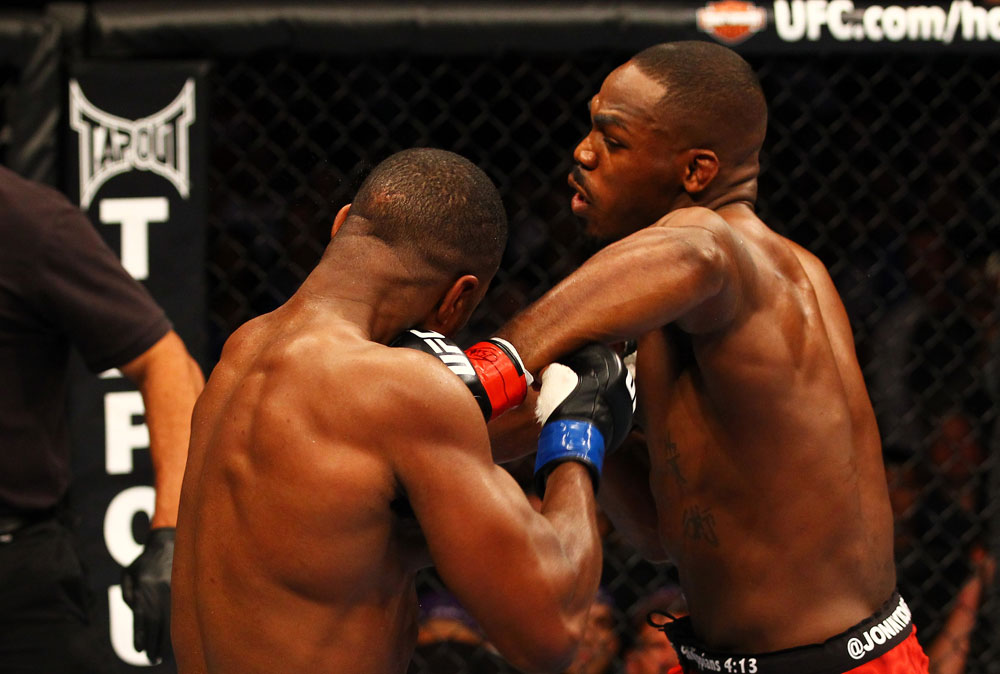 JONES TAKES IT TO ANOTHER LEVEL

UFC light heavyweight champion Jon Jones answered any remaining critics with a virtuoso performance on Saturday night. He completely shut down arch nemesis Rashad Evans in every facet of the game. The win erased any doubt over the legitimacy of his championship reign.

Remember that it was Evans, not Jones, who was originally supposed to face Mauricio “Shogun” Rua at UFC 128 in Newark, New Jersey. When Evans injured himself, the UFC opted to substitute in Jones, rather than delay the championship bout until the rightful number one contender healed. That decision sparked controversy inside one of the most successful mixed martial arts teams in the world – Jackson-Winklejohn MMA – and ultimately left a cloud of doubt lingering over Jones’ reign.

Jones not only cleared the skies with his win. He firmly placed himself in the middle of the vaunted pound-for-pound debate with fellow mega stars Georges St-Pierre and Anderson Silva. If one just considers fights since January 1, 2011, it is tough to argue that anyone other than Jones deserves to be considered the sport’s single best competitor.

Let’s take a look at the comparables.

During that span, Jones has five annihilation wins in five fights. Quinton “Rampage” Jackson, Shogun Rua, Lyoto Machida, and Rashad Evans were all reigning or former champions at the time they faced him. Yet, “Bones” Jones literally outclassed each of them, making it seem like they didn’t belong on the same level as him. Oh yes, before dispatching with all those elite stars, Jones thrashed then-undefeated star prospect Ryan Bader.

GSP and Silva are also undefeated over the last 16-plus months. But the two have combined for only three fights during that period due to injuries. GSP’s lone victory was a decision win over Jake Shields, who arguably has been the best fighter in the world outside of the UFC for the past few years leading up to the GSP fight. While GSP’s win was impressive, it was just one win. Had the champion also faced and defeated Nick Diaz and Carlos Condit, then one could make a great case for GSP being the sport’s most accomplished fighter since January 1, 2011. One win isn’t enough.

Silva only holds two victories during that span. He made former champion Vitor Belfort and perennial top contender Yushin Okami look amazingly ordinary in those two bouts. That in itself is an amazing feat. Add to the mix that Silva, who is currently in the midst of a 14 fight UFC winning streak, holds just about every UFC championship record imaginable, and it is tough to argue that anyone other than Silva deserves the top spot based on a complete body of work.

But we aren’t looking at entire careers right now. We are just looking at the last 16 months. Nobody in the sport has accomplished more than Jones during that period. Nobody has faced tougher competition. And nobody has made more successful title defenses.

HENDO NEXT UP FOR THE CHAMP

Anyone who thinks that his better days are behind him at 41 years old need only look back to UFC 139, where Hendo survived a back-and-forth war with former champion Shogun Rua in what many believe was the best fight in UFC history. We will break down the fight from every angle as it approaches, but Hendo might just be the toughest matchup for Jones so far in his illustrious career – at least on paper that seems to be the case.

IS MACDONALD-GSP THE NEXT JONES-EVANS?

Rory MacDonald won’t turn 23 years old until July 22. Yet, he is already a veteran of five UFC bouts. His only loss among them was a dramatic, come-from-behind win by Carlos Condit at UFC 115. Had he survived seven more seconds, he would be a perfect 5-0 right now, because he was ahead on two of the three scorecards at the time of the stoppage.

Condit is the reigning interim UFC welterweight champion, just in case you forgot. That tells you just how good MacDonald really is. The question now is whether this guy is the future of a division currently ruled by his mentor and training partner Georges St-Pierre?

Several youngsters have entered the UFC amidst tremendous hype. None more so than Vitor Belfort, who, at 19 years old, won a UFC heavyweight tournament. He instantly became one of the sport’s favorite sons. His lightning-fast hands, Gracie pedigree and good looks made him an instant star in the sport’s early years. Yet, it took Belfort seven more years before he finally won his first UFC title. And he wasn’t able to successfully defend it.

Belfort has had a great career and remains one of the very best fighters in the sport, but he has never quite lived up to the tremendous hype that followed him during his early years.

Jon Jones didn’t enter the UFC with the same wave of popular support as Belfort. Some could argue that he competed under the radar for his first several fights before finally getting everyone’s attention with his destruction of Brandon Vera two fights before capturing the 205-pound championship. There is little doubt that Jones has exceeded all but probably his own expectations at this early point in his career. Of course, the expectations for him now are through the proverbial roof. Unless he becomes the next Anderson Silva (or first Jon Jones), I’m not sure whether people will view him as fulfilling his destiny or not.

That brings us to Rory MacDonald. This guy is definitely the real deal. His near-miss with Condit and win over Nate Diaz are vivid evidence of that truism. Expectations for him are building like those for few other 22-year-old fighters in the sport. I’m not so sure he will be able to live up to them any time soon.

That isn’t by any means meant to be a knock on his skills. MacDonald has plenty of those. It is instead the reality of competing in a division that is currently ruled by an all-time great who remains squarely in the prime of his athletic career. GSP turns 31 next month.

Unless GSP starts to decline due to injuries or accumulated cage mileage, it is tough to imagine anyone derailing his career in the short term. Condit certainly has a shot at it. Maybe Johny Hendricks and Nick Diaz, too. But none of those guys will be betting favorites against the champion.

It is equally tough to imagine MacDonald staying out of the welterweight title picture during the next couple of years. So it seems that GSP and MacDonald two are on a collision course, much like Evans and Jones when the two were both training under the same roof.  I know I’m getting way ahead of myself. GSP is currently recovering from an ACL tear and MacDonald is not yet considered a true welterweight contender. He’s also gone on the record saying that he won’t fight his training partner. But I have no doubt that GSP will be back as good as before and MacDonald will enter contender status by the end of the year or possibly early in 2013.

So when the time comes…if the time comes…will GSP and MacDonald compete as teammates? Will one of them leave Zahabi MMA and Tristar Gym as their collision course starts to draw near?

Those questions will make MacDonald’s rise through the division that much more interesting in the coming months and years, in my opinion.

THE TIME IS NOW FOR BROWNE

The UFC heavyweight division is about as deep as it has ever been with guys like Junior dos Santos, Cain Velasquez, Frank Mir, Alistair Overeem, Mark Hunt, “Minotauro” Nogueira and others. The UFC now has the luxury of putting on non-title marquee matchups, just like it does in other divisions, to sort out the championship challenger queue.

Travis Browne is ready for one of those marquee matchups.

Five fights into his UFC career, Browne already owns a couple of bonus checks for Submission of the Night and Knockout of the Night. He also has a draw on his record against the well-respected Cheick Kongo – a fight that many believe he should have won. Still undefeated through 14 professional fights, “Hapa,” as he is known, is now ready for the big time.