The Road to Jones vs. Evans... 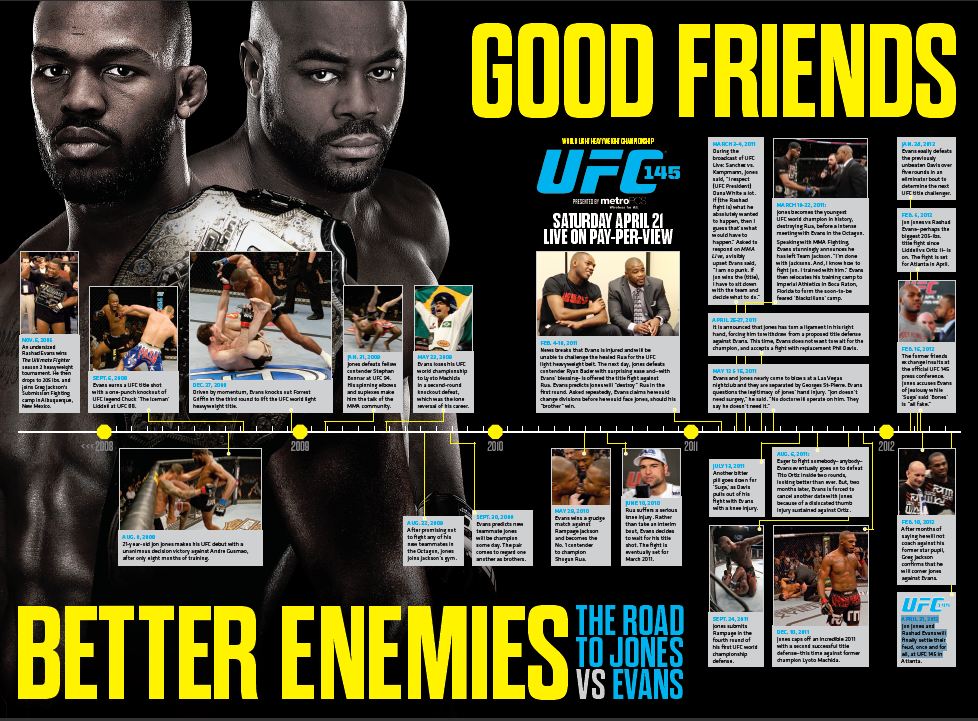 AUG. 9, 2008
21-year-old Jon Jones makes his UFC debut with a unanimous decision victory against Andre Gusmao, after only eight months of training.

SEPT. 6, 2008
Evans earns a UFC title shot with a one-punch knockout of UFC legend Chuck ‘The Iceman’ Liddell at UFC 88.

DEC. 27, 2008
Driven by momentum, Evans knocks out Forrest Griffin in the third round to lift the UFC world light heavyweight title.

JAN. 31, 2009
Jones defeats fellow contender Stephan Bonnar at UFC 94. His spinning elbows and suplexes make him the talk of the MMA community.

MAY 23, 2009
Evans loses his UFC world championship to Lyoto Machida in a second-round knockout defeat, which was the lone reversal of his career.

AUG. 22, 2009
After promising not to fight any of his new teammates in the Octagon, Jones joins Jackson’s gym.

SEPT. 30, 2009
Evans predicts new teammate Jones will be champion some day. The pair comes to regard one another as brothers.

MAY 29, 2010
Evans wins a grudge match against Rampage Jackson and becomes the No. 1 contender to champion Shogun Rua.

JUNE 10, 2010
Rua suffers a serious knee injury. Rather than take an interim bout, Evans decides to wait for his title shot. The fight is eventually set for March 2011.

FEB. 4-10, 2011
News breaks that Evans is injured and will be unable to challenge the healed Rua for the UFC light heavyweight belt. The next day, Jones defeats contender Ryan Bader with surprising ease and—with Evans’ blessing—is offered the title fight against Rua. Evans predicts Jones will “destroy” Rua in the first round. Asked repeatedly, Evans claims he would change divisions before he would face Jones, should his “brother” win.

MARCH 3-4, 2011
During the broadcast of UFC Live: Sanchez vs. Kampmann, Jones said, “I respect (UFC President) Dana White a lot. If (the Rashad fight is) what he absolutely wanted to happen, then I guess that’s what would have to happen.” Asked to respond on MMA Live, a visibly upset Evans said, “I am no punk. If Jon wins the (title), I have to sit down with the team and decide what to do.”

MARCH 19-22, 2011:
Jones becomes the youngest UFC world champion in history, destroying Rua, before a intense meeting with Evans in the Octagon.
Speaking with MMA Fighting, Evans stunningly announces he has left Team Jackson. “I’m done with Jacksons. And, I know how to fight Jon. I trained with him.” Evans then relocates his training camp to Imperial Athletics in Boca Raton, Florida to form the soon-to-be feared ‘Blackzilians’ camp.

APRIL 25-27, 2011
It is announced that Jones has torn a ligament in his right hand, forcing him to withdraw from a proposed title defense against Evans. This time, Evans does not want to wait for the champion, and accepts a fight with replacement Phil Davis

MAY 12 & 15, 2011
Evans and Jones nearly come to blows at a Las Vegas nightclub and they are separated by Georges St-Pierre. Evans questions the legitimacy of Jones’ hand injury. “Jon doesn’t need surgery,” he said. “No doctor will operate on him. They say he doesn’t need it.”

JULY 13, 2011
Another bitter pill goes down for ‘Suga,’ as Davis pulls out of his fight with Evans with a knee injury.

AUG. 6, 2011:
Eager to fight somebody—anybody—Evans eventually goes
on to defeat Tito Ortiz inside two rounds, looking better than ever.
But, two months later, Evans is forced to cancel another date with Jones
because of a dislocated thumb injury sustained against Ortiz.

SEPT. 24, 2011
Jones submits Rampage in the fourth round of his first UFC world championship defense.

JAN. 28, 2012
Evans easily defeats the previously unbeaten Davis over five rounds in an eliminator bout to determine the next UFC title challenger.

FEB. 6, 2012
Jon Jones vs Rashad Evans—perhaps the biggest 205-lbs. title fight since Liddell vs Ortiz II—is on. The fight is set for Atlanta in April.

APRIL 21, 2012
Jon Jones and Rashad Evans will finally settle their feud, once and for all, at UFC 145 in Atlanta.