Michael DiSanto is back with more thoughts on last Saturday's epic UFC 144 event in Japan... 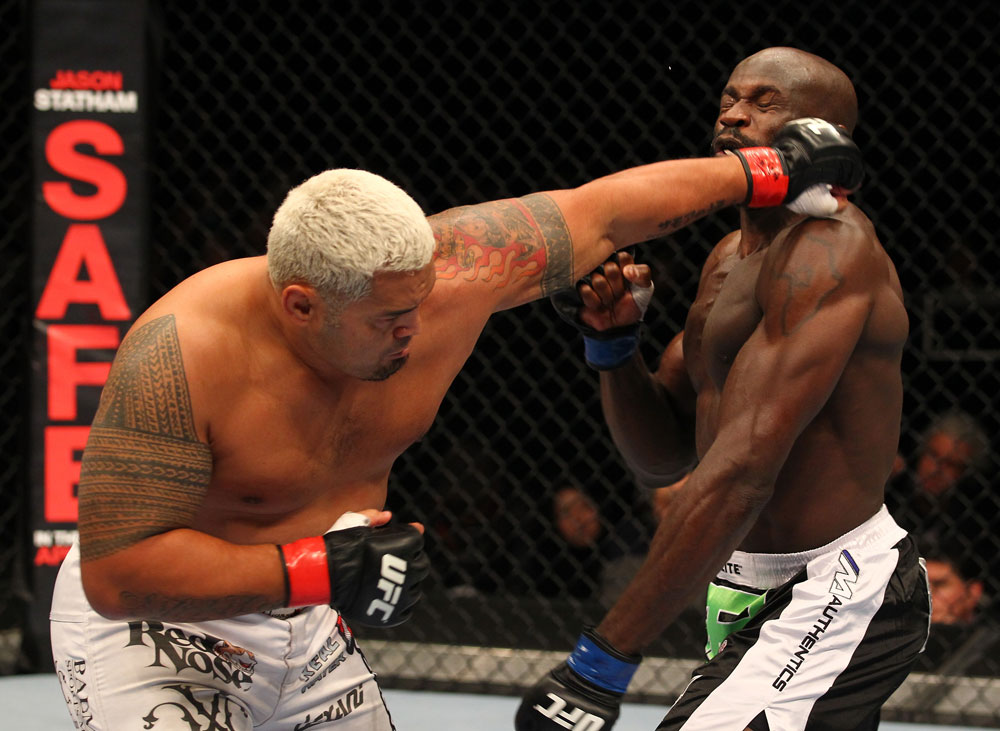 There are MMA strikers. And then there are pure strikers.

We use the phrase “world-class” way too much, when it comes to describing skills of a particular MMA fighter. There are very few world-class strikers in MMA. You can probably count them on one hand. Hunt is among them. That isn’t me going out on a limb. This guy is the former K-1 champion. For those who don’t know, K-1 is the top of the food chain, in terms of striking competitions. I’ll take the K-1 heavyweight champion over the heavyweight boxing champ any day.

Hunt’s reaction after the fight says it all. He is a man of few words. He expected to win. He knows he is the best striker in the heavyweight division. Next question.

I am struggling to think of another fighter in the UFC who has improved more in his late 30s than Hunt. He turns 38 in less than a month, and he is now on a three-fight winning streak after surviving a six-fight losing streak. Yes, you read that correctly. Mark Hunt lost six consecutive fights from 2006 to 2010.

Approaching his 38th birthday, this is the best Mark Hunt that the world has ever seen. I can wait to see what’s next for the Super Samoan.

I’d love to see him scrap with Pat Barry, by the way. That would be a standup fan’s dream matchup.

Jake Shields DID NOT win every round against Yoshihiro Akiyama on Saturday night. Look, I don’t have a dog in this fight. It’s not like I have an Akiyama bias. If anything, I have a Shields bias – he is a great guy, a lot of fun to hang out with, and one of the true gentlemen in the sport.

But he didn’t win all three rounds. Shields even admitted as much in his post-fight interview.

This is yet another example of why we need to further educate the judges in our sport. That score was bizarre, absolutely bizarre.

For the record, I scored the fight 29-28 for Shields. I scored the first round for Akiyama. He controlled the action with effective aggression, landed several meaningful strikes, and put Shields on his back. Shields won the second, in my opinion, because he completely dominated the standup game. He didn’t land anything of consequence, but he kept touching his foe over and over. The third was easy to score. Shields almost finished it, and Akiyama should have lost a point for grabbing the fight two (or maybe even three) times.

This was a fight where judges got it wrong and right at the same time. Shields won; just not every round.

By the way, the fight proves to me that Akiyama should stay at welterweight. That is the best he has looked in the UFC, in my opinion. I’m less convinced that Shields should remain at welter. He seemed exhausted midway through the second round. Thus, I think the weight cut is too much for him at this point in his career.

The “man weight” he has added in the last four or five years makes welterweight too difficult. I’d like to see Shields move up to middleweight and see what he can do. Sure, he needs to fix his striking deficiency, if he wants to compete with guys with great takedown defense. But I think that 185 pounds might be the best weight class for him at this point.

“THE BARBARIAN” HAMMERS HIS WAY INTO CONTENTION

People who suggest that a cornerman is irrelevant probably didn’t watch Tim Boetsch come back from oblivion to knock out Yushin Okami. Boestch got dominated in the first two rounds. Then, as he stood from his stool for the final stanza, his head cornerman, Matt Hume, said “You’ve just got to be super aggressive this round, son.”

Translation: You are losing the fight and need a stoppage to win.

Boetsch took those words to heart and obliterated Okami in the final round. It was one of the more impressive final round comebacks in recent memory. There was nothing in the first two rounds that suggested that Boetsch had any shot at winning. Instead, it seemed like just another routine unanimous decision for Okami, who is one of the most difficult riddles to solve in the middleweight division. Yet, “The Barbarian” refused to be denied, and he somehow found a hole in his foe’s game – defending the uppercut in the clinch. Okami had no answer, so he went to sleep.

Boetsch didn’t just make himself relevant in the division. He is now an instant contender. How can I be so certain? In his last 23 Okami fights, only five men, including Boetsch, hold a victory over him. Anderson Silva. Rich Franklin. Chael Sonnen. Jake Shields. And Tim Boetsch. Yep, he is now legit.

Joe Rogan is the best in the business. I’m going to take that one step farther. He is the best color man in any major sport. I said it. Flame away. I don’t care. I’ll still read the comments anyway. Rogan coined a phrase that I’m going to use again and again. Anthony Pettis went “shin to chin” with Joe Lauzon, resulting in the most spectacular high kick knockout of 2012 to date.

For anyone who wasn’t a WEC fan back in the day, Pettis holds a win over Benson Henderson. Actually, it was more than a win. It was a win punctuated by a ninja kick that swiped the WEC lightweight championship from Henderson’s grasp. But for a hiccup against Clay Guida in his UFC debut, Pettis would have been fighting Frankie Edgar tonight, not Lauzon.

Pettis is absolutely among the 155-pound Preferiti. It will be interesting to see what Dana White and Joe Silva have in store for him next.

There was a time, not that long ago, when purported hardcore fans and fan blogs searched for any reason to anoint a non-UFC fighter as the “best in the world.” In my opinion, it was their way of showing the message board world that they knew something that the rest of us supposedly didn’t. Sometimes those folks had it very wrong. Sometimes they didn’t.

There is an argument that in 2005 those folks had it exactly right. Those were the days that many viewed Norifumi “Kid” Yamamoto one of the very best fighters in the world, pound for pound. That year, he won an elite Japan-based lightweight tournament. He followed up a perfect 4-0 in 2005 with a four-second knockout of Kazuyuki Miyata in what remains one of the fastest knockouts in the history of the sport.

Suffice to say, Yamamoto was a beast back then, and at a paltry 5’4, he was almost always fighting much bigger opponents. Yamamoto remained in the pound-for-pound discussion through 2007, racking up a total of 14 consecutive wins. But injuries and a long hiatus from the sport changed everything.

Yamamoto has now lost five of his last six fights, including three in a row, despite dropping all the way to bantamweight. I’m not sure what has gone wrong with one of the most popular fighters in Asia. Maybe dropping a couple of fights in a row crushed his confidence? Maybe he is just on a stretch of bad luck? Maybe?

If we are being honest with ourselves, Yamamoto is in very real danger of becoming just another opponent, if he doesn’t right the ship soon. Three straight losses in the UFC often results in a man to go find himself in a smaller promotion before returning to the bright lights of the Octagon. I don’t know if that fate awaits Yamamoto or not. Only Dana White can answer that question. What I do know is that a man who used to be viewed as one of the best is in the midst of a dramatic fall from grace.

Everything I said above about Yamamoto being a legend before ever coming to the UFC applies to Takanori Gomi as well. I’ll go so far as to say that he absolutely was the very best lightweight in the world when he was the reigning PRIDE Lightweight Champion. I don’t think there was any doubt about it.

Like Yamamoto, Gomi fell on extremely hard times, though his struggles started half a year earlier, at the end of 2008. He dropped five of eight fights from November 2008 through September 2011. Riding a two-fight losing streak (both by stoppage) heading into UFC 144, Gomi needed a win as badly as anyone on the card.

Mission accomplished. Well done, “Fireball Kid.” Well done.  The win certainly keeps him relevant in the UFC’s lightweight division. The living legend needs to do more in order to move into actual title contention, but he certainly is still relevant.