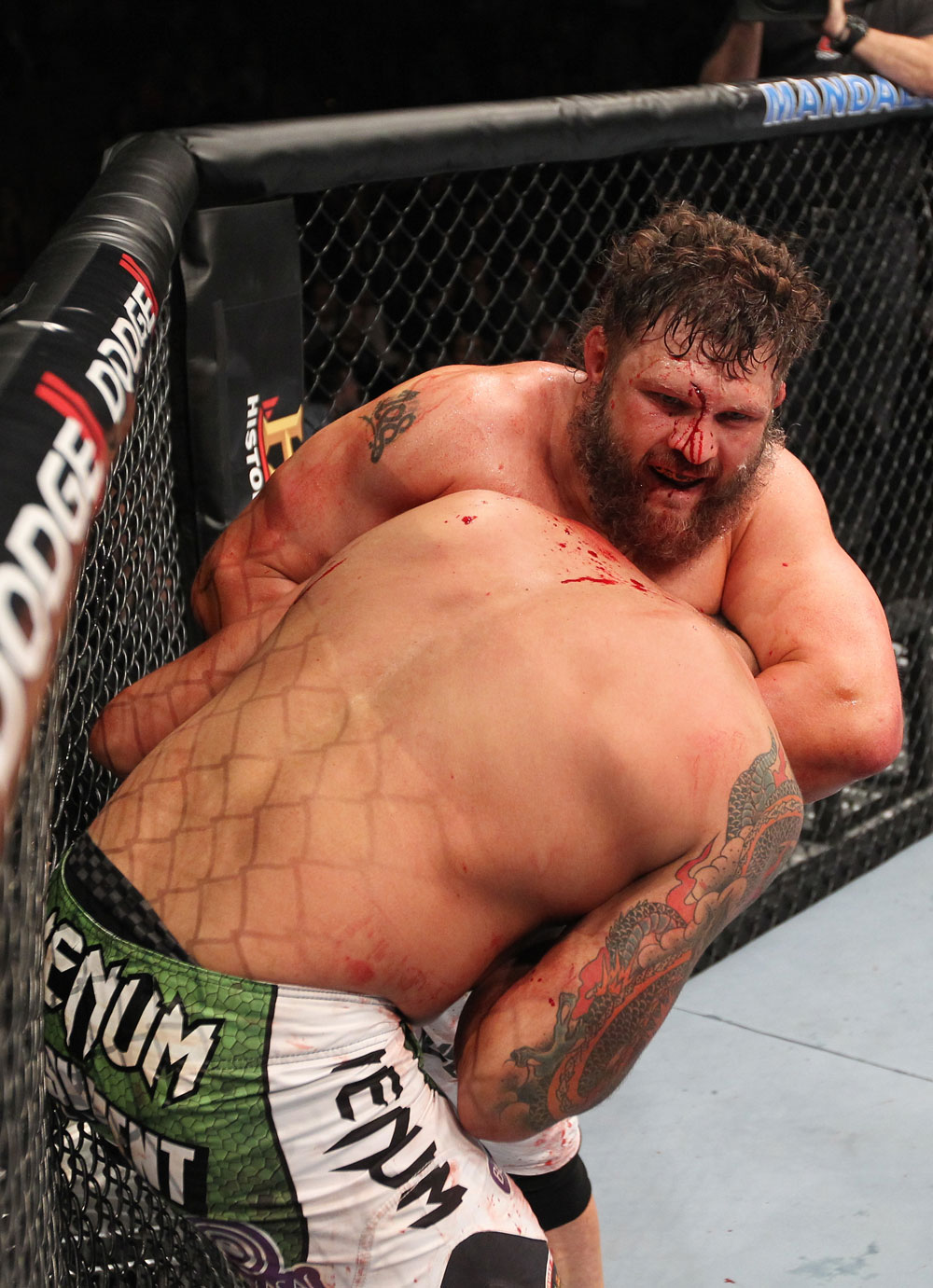 NELSON IS AS TOUGH AS THEY COME

Roy Nelson is one bad dude. Not bad in the behavioral sense. Bad in terms of toughness. Anyone watching his last four fights knows that this guy is near the top of the food chain in terms of durability, heart and grit. He also has better than average power for a heavyweight.

The problem, of course, is that Nelson isn’t a true heavyweight. Not by a mile. The six-foot mixed martial artist has the frame of a middleweight. Despite the fact that he has shed 20 pounds over his last two bouts, he still carries no less than 30 pounds of excess body fat. And I’m probably being generous with that number.

Imagine how good this guy could be, if he could make 185 pounds. I know that is asking a lot. It would require a complete physical transformation. But Nelson wouldn’t be the first guy to pull that off. Former UFC fighter Joe Riggs actually began his career as a 300-pound heavyweight before dropping all the way to 170 pounds. I don’t see any reason why Nelson, with the help of a master dietician and a ton of self-discipline, couldn’t drop to middleweight.

Imagine a lean, muscular Nelson competing against guys with similarly sized skeletal frames. I think he would be an absolute beast, if not a legitimate championship threat. Yes, I know that there is this guy named Anderson Silva who just so happens to rule the middleweight division. He is pretty good, though Nelson has a much better chance against Silva than he does against any of the top heavyweights. He simply gives up too much size and strength to the top heavies, in my opinion.

Plus, I wonder if Silva, Vitor Belfort or any of the other middleweight bombers could stop “Big Country” with strikes. Junior dos Santos, a much bigger, more powerful champion than any middleweight, hit Nelson with everything, including the kitchen sink, and couldn’t knock him out. What makes anyone think that top middles would fare any better?

I also wonder if middleweights could handle Nelson’s power, assuming it the drop in weight wouldn’t adversely impact it. Fabricio Werdum made no bones about the fact that he took lots of painful lumps in his win over Nelson. Frank Mir experienced the same result. And dos Santos ate more than one punch during his dominant win over Nelson that left him second guessing whether he wanted to fight in a phone booth versus dominating from the outside.

I know Nelson is a master at using his added girth to his advantage on the ground. Yet, it is difficult for me to believe that his ground game would suffer from a significant move south on the scales. It’s not like this guy just lays on people. He is a Brazilian jiu-jitsu black belt under Renzo Gracie, so his ground game is a highly technical chess match that I believe would be even more effective against smaller guys.

Even if 185 pounds is a pipe dream, 205 pounds should not be a very difficult journey. He is already 20 pounds, plus a typical weight cut, away from qualifying for the land of the light heavies. Jon Jones is one of the very best in the game, but just like with Silva, I’d give Nelson a much better chance at upsetting that guy than dos Santos.

Make no mistake about it. Josh Koscheck remains one of the top five welterweights in the world. It is a position that the polarizing veteran has occupied for several years. Saturday’s split decision win, one that many believe was wrongly decided by the judges, does nothing to affect his lofty status. A win is a win, and Kos now has 15 of them in 20 trips to the Octagon.

Nonetheless, I’m a bit surprised that Kos continues to struggle to seamlessly blend his world class wrestling skills with a standup game that has become one of the better in the division. Sure, he scored two takedowns, arguably the difference-makers in two of the three judges’ eyes. But the takedowns appeared to be more moves of necessity—dare I suggest desperation—than a natural part of his offensive attack.

It seems to me that Kos prepares for a fight one way or the other—standup or wrestling—and it shows in his performance. Anyone believing that this guy can no longer dominate a bout with his wrestling should pop in the DVD of UFC 113. Kos put on a takedown, ground control and ground-and-pound clinic against Paul Daley on that night. It was a masterful performance of technique, though it was the last time we have seen Kos use his wrestling to dominate the action. That is a complete shame because this guy is wasting his biggest competitive asset.

Kos has a dynamite right hand. He loves to knock people out. Knocking people out, versus holding them down and grinding out wins, tends to result in bigger paydays. All that is fine and good. But the former AKA star (more on that below) will increase his knockout opportunity by forcing opponents to constantly fear the takedown.

I’ve been writing for years that Kos was a future champion. I still believe that to be the case, but only if he starts to truly reincorporate his wrestling into his off attack.

Two other pieces of constructive criticism are warranted. Kos either needs to find away to stop tugging at his shorts. I don’t know if that is a nervous tick or if his thick thighs constantly pull on his fight shorts. Either way, that behavior first reared its head during his second bout with Georges St-Pierre. It has been a constant ever since. He ate several jabs from GSP, Matt Hughes and Pierce solely because his hands were on his thighs, rather than held high in a defensive position. I guarantee opponents are keying strikes off Kos grabbing his shorts. He should find a way to eliminate that hole sooner rather than later.

The second item to consider is the waning use of his left hand. Kos has a very good jab and a tremendous left hook. Yet, he hardly threw either on Saturday night. One-trick strikers are easy to deal with no matter how good that one trick might be. Kos knows that. Increasing the use of his left hand will make his right that much more effective.

I was taken aback when Josh Koscheck announced at the post-fight presser that he would no longer train at the San Jose headquarters for the American Kickboxing Academy. Keep in mind that this guy owns, not one, but two gyms in Fresno, California that bear the AKA name. I have no idea if the decision leave AKA San Jose will affect the licensing rights for those two gyms. That stuff will sort itself out over the coming weeks.

What is interesting about the split is that it apparently isn’t a split from Team AKA. According to an interview with MMAWeekly.com's Damon Martin, it is actually only a departure from his head coach, Javier Mendez. An irreparable personal rift has apparently developed over the last few years, so Kos has opted to go in a different direction.

The welterweight contender plans to continue having “Crazy” Bob Cook and Dave Camarillo, two of his longtime coaches, prepare him for battle, and both will continue to work his corner during fights, according to Kos. He also plans to provide housing and a paycheck for his close friends and AKA teammates to come up to Fresno for his training camps.

This is an interesting development, for sure. It is newsworthy any time a top fighter makes a coaching change. But I’m not sure if this qualifies as a coaching change, since Cook and Camarillo will remain  constants in his camp. One has to assume that Kos will enlist the help of a new striking coach to replace Mendez, though he has not made any announcements to that effect just yet.

Without getting into the details behind the rift, I think that the change will actually be good for Kos. There is no doubt that his development has become stagnant over the last couple of fights. Maybe the disconnect with Mendez is to blame. Maybe he has become too comfortable in his routine. The maybes are endless. What is certain, though, is that, if Kos really trained himself for the Pierce fight, as he is claiming, then change is an absolute must.

A new voice of authority, new techniques, a change of scenery or all of the above might be just what the doctor ordered for Kos. His routine will obviously be different training out of Fresno, rather than San Jose. Just that little variation from the mundane past might be enough to jumpstart Kos back on the upswing of the developmental curve. Of course, the biggest risk is that his longtime teammates and friends won’t make the journey to Fresno to help Kos prepare. If that happens, he will need to figure out a backup plan for elite training partners. Otherwise, the departure could turn out to be disastrous.

History suggests that Kos will be just fine, possibly even better off. Elite fighters who spend their entire career training with one head coach and in one location are the great exception, not the norm. Reigning or former champions GSP, Rashad Evans, Jon Jones, Anderson Silva, Randy Couture, Vitor Belfort, Rich Franklin, Quinton Jackson, BJ Penn, and a host of others have all made at least one major camp change in their respective careers. The book is still out on Evans, but the rest of them enjoyed tremendous success after making the change. I have a feeling Kos will follow suit.

UFC 143 was the debut for the UFC’s new pay-per-view production format. The intro was a dramatic change from the kneeling gladiator that had become the promotion’s trademark opener. The watermark time clock sported a completely different look. The regular use of on-screen, in-fight statistics appeared for the first time. And the promo for UFC 144 had a totally different feel from 2011 and earlier promos.

Bottom line, I’m a big fan. I absolutely loved the way UFC 143 came across from a production standpoint.  That includes the production for the televised prelims on FX, which clearly had FOX production team written all over them and was a major step up from the 2011 and earlier televised prelims, in my opinion.

What do you think of the new television look and feel? Was it as obvious to you as it was to me? Let me know your thoughts in the comment section below. I’ll be reading, as always.