An interim welterweight champion was crowned at UFC 143 last Saturday night - Michael DiSanto takes a look back at the fight everyone is talking about - Condit vs. Diaz 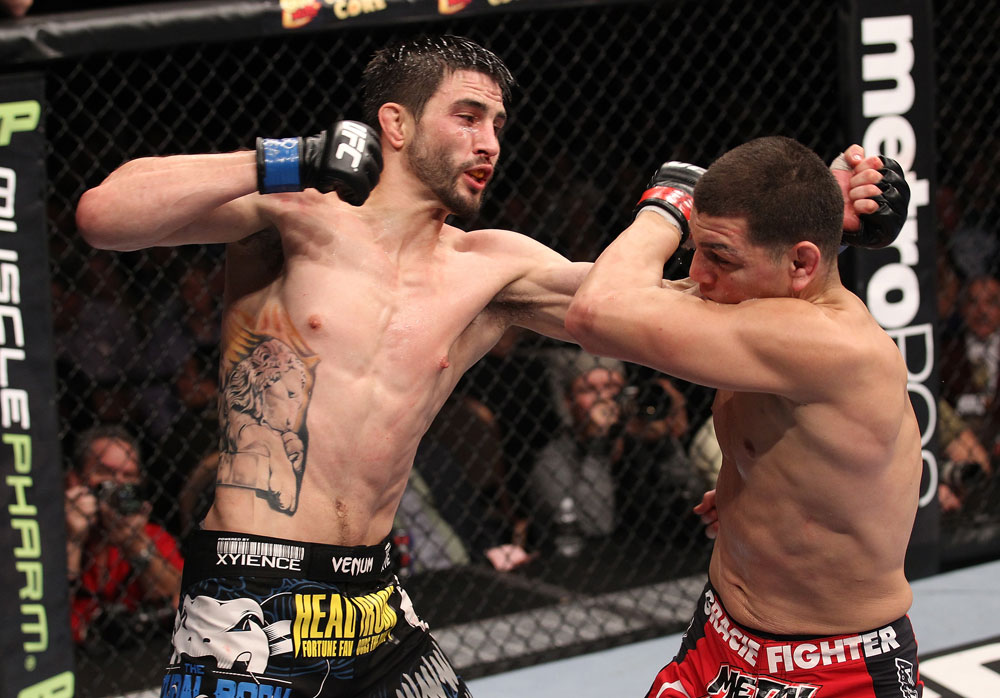 NOT AS ADVERTISED, BUT POSSIBLY THE BEST TACTICAL DISPLAY OF 2012 TO DATE

Anyone who read my pre-fight breakdown knows that I was seriously salivating over what appeared to be a surefire barnburner between Nick Diaz and Carlos Condit. I really thought the matchup had all the necessary ingredients for a “Fight of the Year” performance. The fight certainly didn’t live up to the hype from an all-action standpoint, but that does not, in any way, detract from what was a near flawless performance by Condit.

“The Natural Born Killer” committed to a game plan that consisted of sticking and moving with the use of constantly changing angles. He never varied from that attack, not even for a minute. Sure, Diaz trapped him a few times, forcing Condit to fight with his back against the cage. But those exchanges lasted only a few brief seconds before the new interim champion circled away from the cage and resumed his tactical approach.

Diaz pleaded with him over and over to stand and fight, using vitriolic trash talking, taunts with his hands at his side, and doing just about everything else he could think of to try and goad his foe into a brawl. Condit never gave in to temptation, despite the fact that his natural inclination is to plant his feet and go to war with opponents. Anyone who believes that is easy to do should go back and watch Diaz’s career over the last four or five years. Every one of his opponents, except for British slugger Paul Daley, entered the cage with the same game plan. Only Condit was able to successfully implement it.

While the end result wasn’t a “Fight of the Year” battle, it was a virtuoso tactical performance, arguably the best of 2012 so far.

DEFEND OR NOT TO DEFEND, THAT IS THE QUESTION

Condit’s win over Diaz brought him a share of the championship that he so desperately coveted, but the belt comes with a dilemma. UFC President Dana White revealed after the fight that champion Georges St-Pierre is nowhere near being ready to resume full mixed martial arts training. The current estimate is the champion will finish his rehabilitation sometime in June, which means he won’t likely return to competition until November, at the earliest.

GSP’s health leaves Condit in a precarious position. He has to decide whether to wait for GSP and unify the belts in his next fight or take an optional defense while the Canadian standout is on the mend.  That may seem like an easy choice, but this is anything but an easy decision. Let’s look at both sides of the issue.

The argument in favor of waiting is an easy one to make. First and foremost, Condit knows that his title is only a placeholder until GSP returns. He will forever be able to refer to himself as a UFC titlist, but not a champion, until he defeats GSP (or GSP fails to return from his current injury exile). Thus, he hasn’t really accomplished his goal of reaching the pinnacle of the sport. Not yet anyway.

Taking an interim fight in the unpredictable world of the UFC, where there is no such thing as a tune-up or keep-busy championship bout, creates a risk that he will never actually receive the opportunity to challenge for the true championship. Thus, the risk created by defending the interim belt outweighs the reward, in terms of building Condit’s legacy in the sport.

Second, if there is ever a time to face GSP, who is one of the best fighters on the planet, pound for pound, it is right after he returns from a major injury. GSP will have to deal with the dreaded cage rust when he returns. I’m not listening to any argument to the contrary.

There is no way that he will be as sharp in his first fight back as he was in his last bout. The issues caused by the time away from active training and actual fighting are compounded by the mental hurdle associated with getting over an ACL tear is no joke. It takes most athletes some reps in actual competition, even once fully healed and rehabilitated, to subconsciously believe that the knee is ready for game speed. I will be shocked, if GSP is any different.

GSP, therefore, should have holes in his game that might not otherwise be present, if Condit faces him at any other point in their respective careers. Why risk blowing that opportunity, just to take an interim fight?

The argument for taking an interim fight is also pretty straightforward. Any advantage that Condit has over GSP due to the champion’s injury-forced exile is tempered by the interim champion self-exiling himself for a long period of time.

Keep in mind that the longest layoff of Condit’s career is 269 days. If he fights GSP on November 1, he will break his personal inactive mark by two days, and there is no guarantee that the true champion will be ready by November 1. Any little setback in his rehabilitation or preparation could postpone the fight even further, which means cage rust will be just as big of a problem for Condit as it is GSP.

Think otherwise? Talk to Rashad Evans about hanging around and waiting for an opportunity, rather than remaining busy. He will quickly admit that long stretches away have affected his subsequent performances. Again, why would Condit be any different?

Equally relevant is the fact that the fight game is as much about earning a living as it is competition. Condit doesn’t get paid to sit on the sidelines. He gets paid when he fights. Does it make financial sense to wait until November or possibly later for his next payday? Remember, we are talking about a guy with a wife, baby and new mortgage.

I’m a firm believer that fighters need to maximize their earnings during their brief time in sport. All fighters have very limited shelf lives. The question of “what’s next” once their career reaches its expiration date is a daunting one for all but the wealthiest of fighters, particularly since the expiration date arrives at different times for different fighters. It is a date that is nearly impossible to predict. So, passing up lucrative paydays, even in the face of risking a potentially more lucrative one down the road with GSP, seems like financial suicide to me.

Equally important, however, is the mental aspect of opting to sit on the sidelines. Think about it for a minute. If Team Condit attempts to talk their man into waiting for GSP, I question whether that would create a little doubt in the back of his mind. After all, if he isn’t good enough to defeat whomever the UFC puts in front of him, what makes anyone think he is good enough to defeat the man who many believe to be the single best fighter in the world? Will that self doubt cause hesitation when he actually receives the opportunity to fight GSP?

I’m a firm believer that Condit should take an interim defense of the interim title, based on GSP’s protracted timetable. Not only will it help maximize his short-term earnings, it will also put him in the best possible position, in my opinion, to remain at the top of his game for when the opportunity to face GSP does finally arise.

What would you do, if you were advising “The Natural Born Killer”? Let me know in the comment section below.

PAY NO MIND TO THE RETIREMENT TALK

Nick Diaz announced after the loss to Condit that he was hanging up the vale tudo gloves. To quote Public Enemy, “don’t believe the hype.”

Diaz isn’t going anywhere. Not after that loss, anyway. His words inside the Octagon were those of a deeply frustrated fighter who believed that, once again, he was treated wrongly by the system. I’m not so sure that he will continue to hold that belief when he goes back and watches the tape of the fight.

For the record, I scored the fight 3-2 for Diaz, giving him the nod in rounds one, two and five. The first two rounds were easy to score, in my opinion, as were rounds three and four. The final round was a bear, and I’ll admit that I still go back and forth on that one.

On one hand, Condit definitely landed more in terms of striking volume and significant strikes. He also showed far better Octagon control by darting in and out, while Diaz continually and ineffectively chased him around.

On the other hand, the takedown followed by the back mount was the single most dominant position of the round for either fighter. Condit was in more danger of getting stopped in those moments than Diaz was at any point in the fight. Of course, Diaz didn’t actually come very close with any of his submission attempts, so there is a school of thought that says I shouldn’t give so much weight to the takedown and back mount. It is a completely subjective question, one that I actually don’t feel that strongly about. In fact, after re-watching the fight, I am actually starting to lean toward Condit for the final round.

Whatever your scoring philosophy, the bout was close enough that it wasn’t highway robbery for either man to drop the decision on Saturday night. Diaz should not feel as if he has been wronged by the establishment. He should instead ask himself why he was unable to cut off the cage when Condit was on his bicycle, or why he didn’t get off first when Condit came into range. It was a very un-Diaz-like performance, one that I chalk up to a bad night mixed with a virtuoso effort by Condit.

Diaz isn’t going anywhere, folks. Trust me on that one. In fact, I think he is probably just one win away from re-asserting himself as the number one contender. Dana White mentioned in a post-fight interview that Diaz versus Josh Koscheck would be an interesting next fight. I agree. I think that is an excellent way to shake out who stands behind Condit, if he opts to wait for GSP. If Condit decides to take an interim challenge, I think Diaz has a strong argument that he deserves a rematch.

Either way, my guess is that Nick Diaz will be back in action inside the Octagon before summertime.