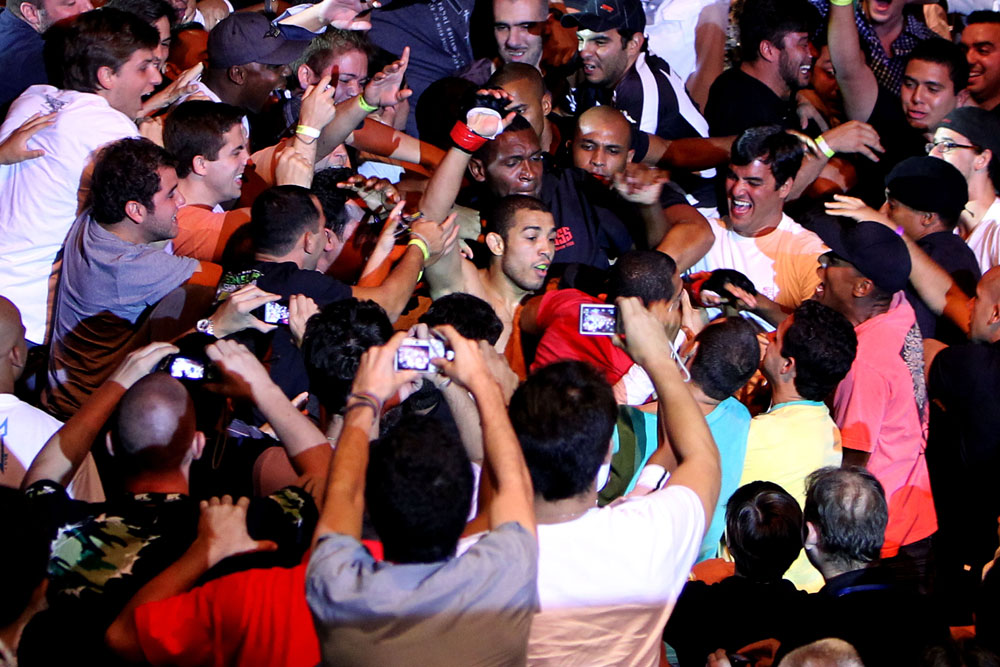 WHERE DOES HE RANK?

I wrote in my breakdown of the UFC 142 main event between Jose Aldo and Chad Mendes that “Aldo can’t just beat Mendes if he wants to reinsert himself into the pound-for-pound discussions. He needs to destroy him…”

Mission accomplished. Aldo made minced meat out of a man who many believed had the perfect set of skills to dethrone the first UFC featherweight champion. And he made it look easy – very easy.

People have to start giving Aldo credit as one of the best pound-for-pound fighters in the world, if not THE best.  His WEC/UFC resume is ridiculous. The only person to make him seem even remotely human in the last six years was Mark Hominick. Aldo had lots of pre-fight issues that arguably contributed to that performance. But even if we disregard those issues, everyone is entitled to a bad night now and then. Anderson Silva came much closer to losing to Chael Sonnen than Aldo did against Hominick. Georges St-Pierre suffered a knockout loss during Aldo’s undefeated run. So I don’t want to hear any of this Mark Hominick stuff when it comes to Aldo’s pound-for-pound claim.

I’ll be the first to say it. Aldo deserves to stand above Jon Jones in the pound-for-pound debate. That isn’t a knock on Jones, who had the most impressive 2011 of anyone in the sport. But he only recently began facing the best of the best. Aldo has been doing that for several years, and pound-for-pound supremacy is about sustained, proven greatness. Jones is on his way. Aldo is already there.

Where Jones stands in the mythical pound-for-pound debate is a matter of opinion. I still firmly lean toward Silva at the top, but I’d put Aldo on par with GSP as vying for the second position. Jones and then Frankie Edgar finish off my top five.

Agree? Disagree? State your case in the comment section below. I’ll be reading, as always.

“THE PHENOM” IS MAKING A COMPELLING CASE

Vitor Belfort looked incredible in his first-round submission win over Anthony Johnson. The former champion took his share of lumps, including a vicious diving punch on the ground. But his overall skill proved to be too much for the light heavyweight version of Johnson. Ok, he wasn’t actually a light heavy, but he didn’t make the 186-pound limit, as everyone already knows.

The win was the second straight annihilation win for Belfort after suffering the dramatic front kick loss to Silva. Belfort will now set his sights on Wanderlei Silva after the pair coach opposite each other on “The Ultimate Fighter: Brazil,” which starts filming shortly. If he obliterates Silva, like he did Johnson and Yoshihiro Akiyama, then there is little doubt that he deserves a rematch with Anderson Silva.

Say what you will about the knockout loss to “The Spider”; it was a single strike loss. I’ve written about that type of loss many times before. They do nothing to prove that one man is superior to the other. All they do is prove that one man got caught.

Silva did not dominate Belfort when he knocked him out. He landed a single strike. Had Belfort’s flying left hand found its mark when Silva’s back hit the ground, the result could have easily been different. That is why a rematch between the two is, in my opinion, the biggest fight available in the middleweight division.

But let’s not get ahead of ourselves. Belfort must first get past Wanderlei without getting injured. Anderson must heal and rehabilitate his ailing shoulder. Then, Anderson must get past the winner of Chael Sonnen versus Mark Munoz. I guarantee you that he hopes Munoz wins because Sonnen came within two minutes of dethroning the champion. So, it is far from a lock that Anderson will defeat the winner of Sonnen-Munoz.

If he does, I think we may just pay witness to the biggest fight in the history of the middleweight division.

Let’s quickly deal with business first. According to a post-fight interview with UFC President Dana White on FUEL TV, Johnson was likely going to be released from his UFC contract following the loss to Belfort, with White citing a 'three strikes and you're out' policy. Johnson missed weight at UFC 76, UFC 104 and now UFC 142. At some point, this guy has to get it right on the scales. We don’t see this sort of issue with other top fighters. Johnson was completely unprofessional with the way he handled his move to middleweight. I don’t care what he points to as the reason. He fought at 170 pounds not long ago. Yet, he missed the middleweight limit? Crazy. Unfathomable. Inexcusable.  He needs to take a hard look at himself and everyone around him because these sorts of repeated weight issues are unprecedented in the UFC, particularly when moving UP, not down, in weight.

Now, to the good part. I thought Johnson looked tremendous at middleweight (or junior light heavyweight), despite the loss to Belfort. He appeared to increase his speed and explosiveness with the extra weight, just like I predicted.  He also appeared to match Belfort’s strength, which shocked me. If not for a couple of quick stand-ups, Johnson may have sent Belfort to the filming of TUF with a shocking (in my opinion) loss on his record. He was certainly winning the round before getting caught in a well executed rear naked choke. All that suggests to me that middleweight is the perfect division for this guy.

I hope Johnson hires a weight cutting guru or dietician and figures out this whole scale thing. It is a tragedy that this guy is wasting his tremendous potential, particularly now that he is entering the prime of his fighting career, by battling the scale, rather than battling for championships. I think the latter is a real possibility if he can figure out the former.

Rousimar Palhares is one scary ground fighter. The vertically challenged middleweight looks like a cartoon character with his muscular build. But those muscles are far from beach muscles. They are evidence of his ridiculous physical strength. Mix that with his otherworldly BJJ, and you have one of the most intimidating ground fighters in all of mixed martial arts. “Toquinho” may have rudimentary standup, but I can guarantee you that nobody in the middleweight division wants any part of his ground game – nobody. That includes pound-for-pound kingpin Anderson Silva.

Mario Yamasaki got it wrong on Saturday night. We all know that. But before you eviscerate the referee, ask yourself whether you have ever made a mistake at your job. I know I certainly have. You have, too.

Yamasaki’s mistake wasn’t borne from incompetence. He thought Erik Silva was illegally striking the back of Carlo Prater’s head, so he disqualified him in the interest of promoting fighter safety. That deserves praise, not condemnation.

The danger of repeatedly striking someone in the back of the head is well documented. As a lifelong boxing fan, I will never forget watching Nigel Benn hit Gerald McClellan in the back of the head again and again in their 1995 title fight. We’ll never know for sure, but the illegal blows may have been the catalyst that forever changed McClellan’s life. Kudos to Yamasaki for doing what the referee in London didn’t have the courage to do back in 1995.

Of course, the replay showed that Silva landed legal blows, so he was wrongfully disqualified. But there was nothing Yamasaki could do about his decision after watching the replay. The UFC, unlike other professional sports, does not provide for replay to change a referee’s decision. The result highlights the need for instant replay in MMA. Other major sports take advantage of technology within prescribed limited. Our sport should do the same.

At the end of the day, though, Yamasaki wrongfully disqualifying Silva doesn’t really matter. The Brazilian bomber has the ability to appeal the loss, which may result in a reversal of the outcome. Dana White stepped up big time and paid Silva his full purse – show money and win bonus – so he wasn’t personally impacted at all by the loss. I’m also certain that he will be treated, when considered for future UFC bookings, as if he won the bout. As far as I’m concerned, this is a no-harm, no-foul situation.

ARE YOU KIDDING ME?

Edson Barboza’s spinning wheel kick knockout over Terry Etim was the most impressive final round knockout that I may have ever witnessed in the UFC. Maybe I will think of something that compares in the coming days, but for now, I’m left in pure awe of the moment. By the way, it was the first ever spinning wheel kick knockout in UFC history. It won Knockout of the Night. I’m thinking it should win Knockout of the Decade. Not to anoint myself matchmaker, but I would LOVE to see a bout between Barboza and Donald Cerrone. That matchup could easily produce Fight of the Year fireworks.

PYLE RIGHTS THE SHIP; IS THERE TIME?

Five months after getting blasted by Rory MacDonald in less than four minutes, Mike Pyle returned to form with a dominant performance against Ricardo Funch. Pyle is a grizzled veteran of the sport, having competed all over the world since making his professional debut against Quinton “Rampage” Jackson way back on November 13, 1999. Pyle’s UFC success – five wins in eight bouts – is certainly noteworthy. The problem is he has yet to defeat an actual contender inside the Octagon. It remains to be seen whether he is a division gatekeeper or a legitimate contender. At 36 years old, the time for him to make a run is now.

Brazil is the home of mixed martial arts. It was fitting, therefore, that each of the 10 fights involved at least one Brazilian. Two bouts pitted Brazilian versus Brazilian. Let’s remove those two bouts from the analysis, since it was guaranteed that a Brazilian would win the matchup. That leaves us with eight. UFC 134 also involved eight bouts where Brazilians fought “others.” The locals went 7-1 in both situations. I know this isn’t country versus country, but 14-2 is nothing to sneeze at. Are Brazilians, on average, the best mixed martial artists in the world? They are making one heck of an argument.