UFC 141 is in the books - Michael DiSanto recaps the action... 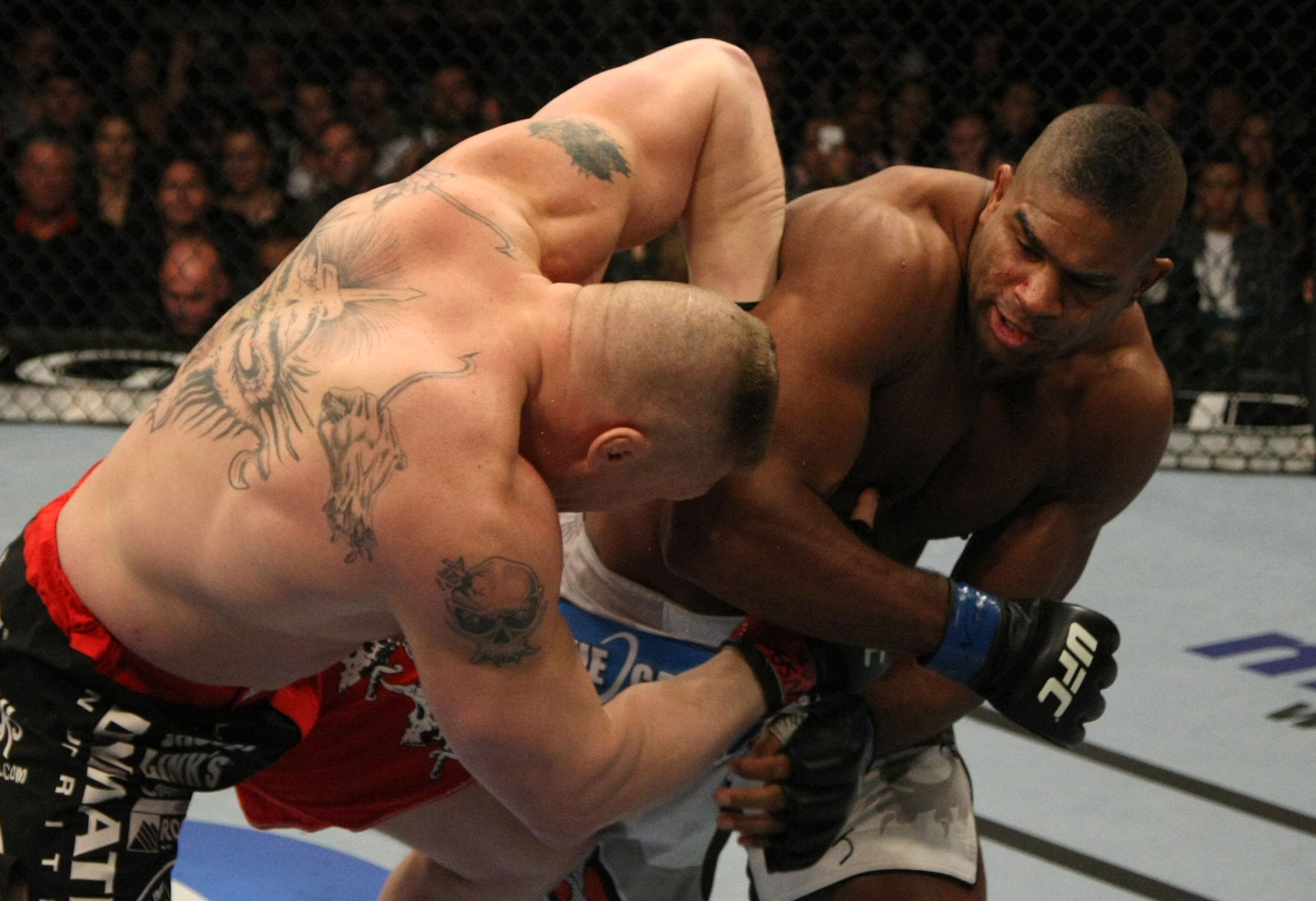 OVEREEM PROVES HE IS THE REAL DEAL

Confession time. I thought Brock Lesnar was going to smash Alistair Overeem. That was probably all too obvious from reading my pre-fight breakdown. The reasons were three-fold. First, Overeem had never before faced a wrestler like Lesnar, and his lack of elite wrestling skills left me doubtful that he could keep the fight standing. Second, he looked remarkably human in his final three 205-lb fights before moving up to heavyweight. Third, his heavyweight accomplishments, while extremely impressive, didn’t exactly come against the MMA elite. There were lots of former UFC / PRIDE fighters on his list of heavyweight victims, but none of them were still at the peak of their career at the time they fell prey to “The Reem.”

Overeem looked tremendous against Lesnar. It was certainly his most impressive heavyweight performance to date, if not the best performance of his career. He did not rely solely on his fists, something he has done in recent bouts against dangerous ground fighters. Overeem instead masterfully mixed in his signature knee strikes and ultimately ended the bout with a perfectly placed shin to the body.

It was the type of performance that should make his title challenge against Junior dos Santos a box office smash. I know that I’m certainly far more interested in the matchup after watching Overeem undress Lesnar at UFC 141. And I wouldn’t be surprised to see the oddsmakers label him the betting favorite in that bout as well. The champion can certainly stand and box with anyone. The question will be whether he can deal with Overeem’s knees and kicks. I don’t see either man bringing takedowns into the mix. Thus, fans of standup wars should be salivating with anticipation over the first heavyweight title bout of 2012.

LESNAR CALLING IT QUITS AT THE PERFECT TIME

I will forever wonder whether Brock Lesnar knew the fate that awaited him at UFC 141. It was shocking to see him choose to stand and strike with Overeem in his MMA swan song. I kept waiting for a takedown attempt that never materialized. Haphazardly grabbing Overeem’s leg doesn’t count. I’m talking about changing levels and freight-training through an opponent like only Lesnar can do.

Ok, Josh Koscheck and a few others can execute similarly explosive takedowns, but no other heavyweight has that ability. I digress.

One has to believe that Lesnar’s two battles with diverticulitis, the second resulting in the removal of a 12-inch piece of his colon, sapped him of his trademark explosiveness. I cannot think of any other reason why Lesnar didn’t at least attempt to shoot in on Overeem. I simply refuse to believe that Lesnar, head trainer Marty Morgan, or anyone else devised a game plan that focused on standing with Overeem. Lesnar is famously stubborn and loves to prove people wrong, but such a game plan would fall far beyond the realm of insanity, if Lesnar still possessed the ability to explode into takedowns. Lesnar may be many things. Insane is not among them.

My guess is that he no longer possesses the ability to explode into double-leg attempts like he did early in his career, thanks to his health issues combined with the fact that he is 34 years old. I’m convinced that is why he knew heading into the Overeem bout that if he lost, it would be his last in the sport.

If I’m correct, then Lesnar’s retirement is coming at the perfect time. Leaving on the heels back-to-back losses to Cain Velasquez and Overeem is nothing to be ashamed of. And it certainly is nothing that overshadows, or in any way tarnishes, his brief, albeit wildly successful career.

IS DIAZ THE MASTER OF MIND GAMES?

Let’s not sugarcoat it. Nate Diaz does a great job of embracing the heel role. Not among fans. Diaz is just as fan friendly as anyone else in the UFC’s lightweight division. He embraces the heel role among his fellow fighters. Diaz makes no bones about the fact that he does not want to be cool with anyone “in his bracket,” as he likes to say.

His attitude toward his opponents is the same heading into each and every fight. Diaz acts loathsome toward his foes. He mean-mugs them at every opportunity. He often taunts them during pre-fight staredowns. And he certainly trash talks during fights.

Many think that is just part of his Stockton, California bravado. I think it is largely an act. One that is designed to both enrage his opponent and also put Diaz in the right mindset to enter a locked cage with a man who has trained for months to do nothing but hurt him.

His antics may not impact every bout, but I firmly believe they impacted his fight with Donald Cerrone. “Cowboy” typically fights with the calm, calculating approach of an assassin. He fought Diaz with pure emotion, particularly in the opening moments of the first round. Cerrone lived up to his pre-fight promise and literally ran across the cage and tried to punch Diaz in the face. The Cesar Gracie standout responded by slipping the punch and countering with a sharp, pinpoint combination that forever changed the course of the fight.

Cerrone was hurt with the very first salvo. He never fully recovered. Diaz, by contrast, used his success in the opening seconds as the foundation for a masterful standup performance, arguably the best of his career.

By the time the first round was over, Cerrone was a beaten fighter. Don’t get me wrong. There is no quit in “Cowboy,” and he fought valiantly for the next two rounds. But the look on his face said it all. There was nothing he was going to do to derail the Diaz train on that night, and I think he knew it.

Yet, once Cerrone stopped fighting from emotion and began just letting his game flow, he performed much better. He lost all three rounds on two of the scorecards, but it is undeniable that he was much more effective in rounds two and three.

After the fight, Diaz wasted no time reaching out to congratulate his opponent for what turned out to be the “Fight of the Night” winner. He also repeatedly acknowledged Cerrone in a sportsmanlike manner to make clear that any venom existed before the fight was nothing more than Diaz just being Diaz. He had no personal beef with Cerrone. It was all mind games.

Future opponents of a man who is rapidly becoming “Nate the Great” should keep that in mind. Fighting this guy from emotion is never a good idea. It takes a clear mind and sharp skills if to defeat Diaz.

Getting knocked out in 12 seconds surely hurts the ego. Jon Fitch was widely regarded as one of the top two or three welterweights in the world heading into UFC 141. His stunning loss to Johny Hendricks certainly changes that. The question is how much.

For my money, I think this was the best possible way for Fitch to lose. I know that may seem crazy, but follow along for a moment. There is no denying that Hendricks has dynamite in his left hand. The entire world knows that. He literally obliterated Fitch with a single, perfectly placed punch. The follow up shot was a glancing blow. Fitch was out before he hit the ground.

MMA is not boxing. Four-ounce gloves mean that anyone with good power can stop just about anyone else with a single punch. Vladimir Matyushenko walked into a jab that crumbled him. That never happens in boxing because of the excessive amount of padding in the gloves. Anderson Silva did the same thing to Forrest Griffin a few years ago, and nobody is questioning the thickness of Forrest’s beard. As a result, knockouts are just a fact of MMA life.

Since Fitch got hit with just one punch, we will never know who the better fighter at UFC 141 truly was. Twelve seconds isn’t long enough to answer that question. All we know is that Hendricks landed a perfect punch. If those two fought 100 times, I would bet every penny to my name that a 12-second knockout would not happen again. Hendricks may win some, most or even all of those bouts. I have no idea. I’m quite sure he would score other one-punch knockouts. But it wouldn’t happen in the first 12 seconds.

Thus, the world is left wondering, as is Fitch. I think that leaves intact his standing as one of the division’s true elite, likely not dropping him below Hendricks in the rankings based on their respective bodies of work over the last couple of years.

Now, imagine if Hendricks had completely dominated Fitch for several minutes, whether ultimately winning by knockout, submission or decision. Would there be any doubt as to who was the better fighter on that night? No. Taking a one-sided beating does more damage to someone’s standing in a division than a one-punch knockout or quick mistake submission loss.

Similarly, what if the pair had fought to a split decision, with Hendricks edging out the win? Doubt may have existed over who was the better fighter that night. But there would have been no doubt that Hendricks was certainly Fitch’s peer.

Now, let’s turn to a sudden come-from-behind win for Hendricks in a bout that Fitch was controlling. Again, that type of result, whether by knockout or submission, would draw into question Fitch’s lack of finishing ability. He is one of the most dominant welterweights of our day, but Fitch is anything but a finisher.

A one-punch knockout loss in 12 seconds raises a lot of questions. Did Fitch warm up properly? Did he temporarily get distracted? Were the stars in perfect alignment? There are millions of questions as to why the result happened. What we don’t have are people talking about how Fitch could not take down Hendricks, how Fitch could not control Hendricks after a takedown, or how Fitch could not do anything on the feet against Hendricks. We also shouldn’t see informed writers questioning Fitch’s chin. It has been tested by guys with as much power as Hendricks, and he passed with flying colors. He got caught at UFC 141—pure and simple. Nothing more. Nothing less. That is why I think that, if Fitch had to lose, Team Fitch should be pleased that it happened this way.

For the record, I’m not in any way taking anything away from Hendricks’ win with the above thoughts on Fitch. It was one of the most spectacular efforts in recent memory, one that certainly earned him a marquee matchup against another division heavyweight, possibly in a main event or co-main event bout. It also makes him an instant title contender because he did something that nobody has ever done—annihilate Jon Fitch without so much as losing a drop of sweat.

The sky may, indeed, be the limit for Hendricks. But I’m going to remain cautiously optimistic for now. The win erases the bad taste of the Rick Story loss, but Fitch is the first true contender that Hendricks has ever beaten. It takes more than one A-list win, in my opinion, particularly when it comes in only 12 seconds, to establish deep roots among the division’s Preferiti.