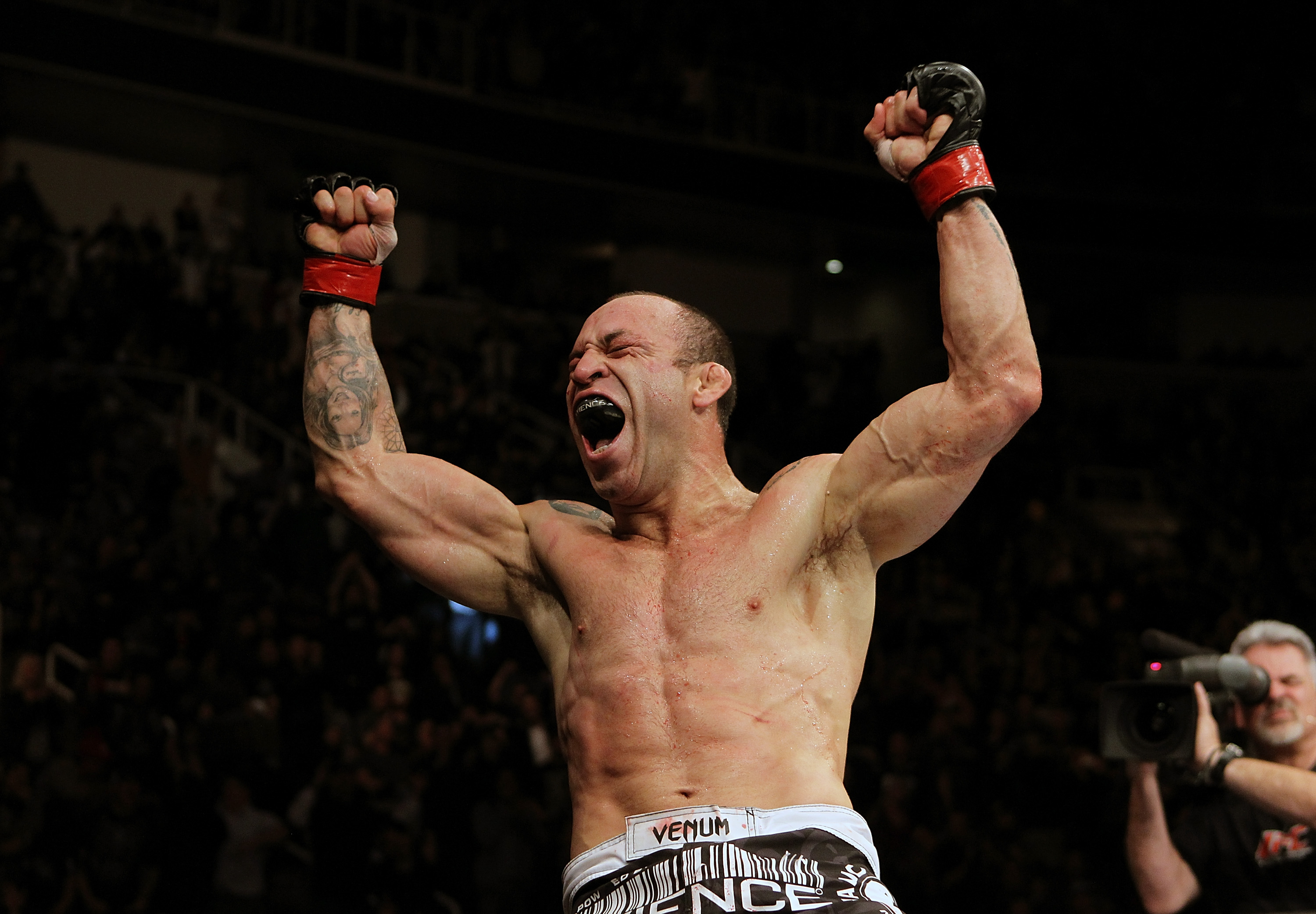 SILVA MAKES GOOD ON PROMISE – “THE AXE MURDERER” IS BACK

Many people thought Wanderlei Silva was a shot fighter back in July after he lost to Chris Leben by savage knockout in just 27 seconds. Silva claimed it was just part of the game. Put two homerun hitters in the cage and someone is bound to get knocked out. Who cares if it takes 27 or 627 seconds?

Silva promised that “The Axe Murderer” would return against mixed martial arts’ version of a Street Fighter character, Cung Le. The San Shou great has the most diverse arsenal of strikes in the history of the sport—bar none, including Anderson Silva.

Le put those strikes on full display against Silva, particularly in the first round. He badly rocked the former PRIDE champion with a spinning backfist thrown immediately after a wheel kick, something that nobody does. But Silva survived.

Then, in the second round, with Le breathing out of a wide open mouth, Silva turned up the heat. He went into full berserker mode, attacking Le with reckless abandon. He turned what had been a kicking display by Le into pure chaos, and Le had no answers.

The knockout instantly resurrected Silva as a middleweight contender. Le has once lost before in MMA, but never like that. His face was a train wreck courtesy of a series of vintage Silva knee strikes and two-fisted bombs.

This was really the first time since coming to the UFC that Silva has closely resembled the man who twice crushed Rampage in PRIDE. It was definitely the defining moment of his UFC career to date, one that definitely quashed any talk among his critics about retirement.

Urijah Faber is one bad dude. The former WEC Featherweight Champion brutally stopped ultra-tough Brian Bowles at 1:27 of the second round to earn his third trip to the dance floor with UFC bantamweight champion Dominick Cruz.

Cruz defeated Faber by unanimous decision back in July. Many thought Faber did enough to justify the decision win. The judges didn’t.

Faber didn’t have to rely on the judges when he first fought Cruz back in 2007. He choked out the current champion in defense of his WEC featherweight championship. The entire fight lasted 98 seconds.

The pair will meet for the third time in 2012. Cruz has the perfect style to give Faber fits because he has tremendous takedown defense and fantastically awkward standup. But Faber knows he can win the fight, if he doesn’t let Cruz’s awkwardness cause him to hesitate on the feet. He needs to let his hands go, just like he did against Bowles. In fact, I think this was the perfect fight to prepare Faber for the rubber match.

What in the world does Martin Kampmann have to do in order to get even a modicum of respect from the judges? I don’t know what the judge who scored the bout 29-28 for Rick Story was watching. I can see an argument for giving Story the first round. I didn’t. But I can see where some people could have sided with the former collegiate wrestler. Nonetheless, there is no plausible argument for scoring either of the second two rounds for Story. None whatsoever.

The bout is yet another in a year-long run of tough luck. Many thought Kampmann did enough to defeat Jake Shields in October 2010. He lost by split decision. He then stalemated Diego Sanchez’s wrestling and out struck him by a comfortable margin in his next bout, only to somehow lose by unanimous decision.

The look on Kampmann’s face was priceless when Bruce Buffer read the first score: 29-28 Story. Resignation blanketed his body. He was convinced that he was about to be robbed yet again. Luckily for him, the other two judges got it right.

Kampmann’s last three fights perfectly illustrate why White always urges fighters not to leave the outcome in the hands of the judges. Kampmann should probably start focusing on stopping opponents, if he wants to steer clear from controversy going forward because his style, while extremely effective, obviously doesn’t appeal to many judges, for some unknown reason.

BONNAR WINS WITH HIS HEAD, NOT HIS HEART

Stephan Bonnar will forever be linked to Forrest Griffin for their 2005 Fight of the Century. On that night, Bonnar proved to the world that he was one of the most courageous, committed fighters in the sport. He walked through the fires of hell trying to find a way to win against Griffin. It wasn’t to be, but that fight helped propel mixed martial arts to where it is today, in terms of main stream appeal.

Since that night, Bonnar has repeatedly engaged in rock’em, sock’em robots-type battles. He stands and slugs, often to his own detriment and certainly with no regard to his personal safety or career longevity. The one notable exception was when he faced crazy slugger James Irvin two fights after his 2005 bout with Griffin. Knowing that he was overmatched on the feet, Bonnar used ground skills learned from the legendary Carlson Gracie to take the fight to the ground, control the action and submit his foe.

Bonnar did the same thing to Kyle Kingsbury on Saturday night, minus the submission. It was, in my opinion, Bonnar’s most impressive victory in the UFC. He could have easily reverted to his old slugfest ways. The crowd was screaming for that. Heck, I was waiting for it. But Kingsbury had a shot at beating him in that type of a fight because he has show-stopping power in his strikes. Kingsbury had no shot at all at defeating Bonnar from his back, so that is precisely where Bonnar put him for three rounds.

It was a brilliant game plan and even better execution. It was also proof that Bonnar remains a highly skilled mixed martial artist who can do some damage in the 205-pound division, if he continues fighting with his head, as much as he fights with his heart.

BADER AVOIDS THE DEADLY THREE IN A ROW

Ryan Bader knew that his bout with Jason Brilz was a major turning point in his career. After 13 consecutive wins to start his career, Bader was on the verge of legitimate title contender status when he ran into Jon Jones back in February. The former Arizona State University wrestling star suffered his first career loss against Jones. He was dominated in every aspect of the game on that night.

Five months later, he stepped into the Octagon to face former 205-pound champion Tito Ortiz. It was a bout that many believed would serve as Ortiz’s UFC swan song. Bader was a younger, more powerful version of Ortiz. A win over the former champion would erase the memory of his first career loss.

It wasn’t to be. Ortiz scored a dramatic submission win in less than two minutes, after rocking his foe with a right hand seemingly out of nowhere.

With back-to-back losses on his resume, Bader was in a bad spot heading into Saturday night’s bout with Brilz. Another loss would temporarily remove him from relevance in the light heavyweight division and almost surely require a fight or two in the sport’s smaller shows to try and earn his way back onto the UFC roster. That is serious pressure for any fighter.

Bader responded with the most dominant performance of his UFC career. It took him only 77 seconds to stop Brilz with a thunderous right hand. That beat his personal UFC knockout record by 61 seconds. Not a bad time to come up with a career-best effort.