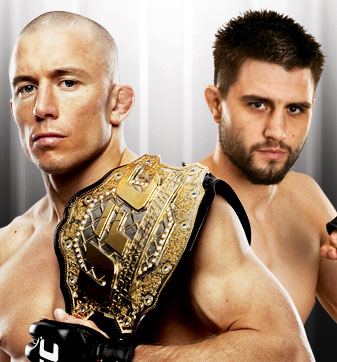 Las Vegas, Nevada – The Ultimate Fighting Championship® announced that tickets to UFC® 137 at Mandalay Bay Events Center on Oct. 29 sold out within a few hours of being made available to the public today. Headlined by a welterweight title fight between champion Georges St-Pierre and the surging Carlos Condit, UFC 137 will also feature an outstanding co-main event between former two-division champion BJ Penn and the fiery, and definitely unpredictable Nick Diaz in 170-pound action.

“It’s been a crazy few days here at UFC, but there’s no doubt that UFC 137 is going to be an incredible card,” UFC President Dana White said. “GSP is on his way to becoming the best welterweight of all-time, but Condit wants that belt. He’s knocked out his last three opponents and couldn’t be more fired up for this fight. Plus, we’ve got BJ Penn taking on Nick Diaz in what could be one of the most intense fights of the year.”

Limited VIP packages are still available as of publish time at VIP.UFC.COM.