After a spectacular night in Houston, what does Michael DiSanto have to say about UFC 136? 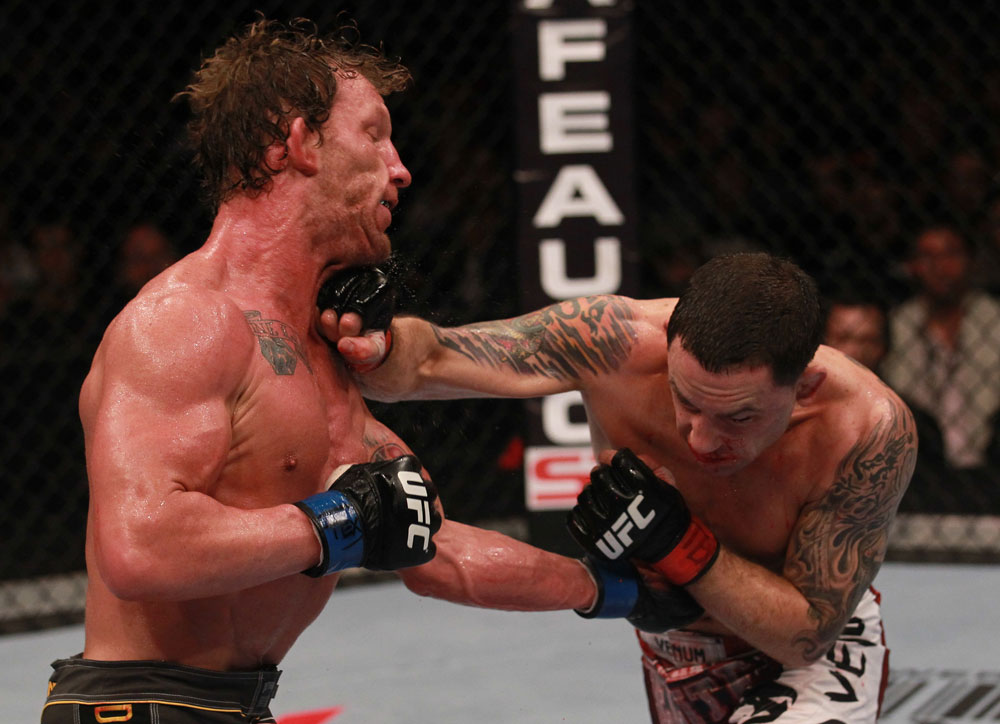 Frankie Edgar was a beaten man at the end of the first round. Gray Maynard was landing right uppercuts at will, dropping the champion multiple times. Edgar returned to his corner at the end of the round with a broken nose, a severely cut left eye and down two points on the scorecards.

I was debating whether to begin writing the coronation piece for the challenger. Luckily, I didn’t waste my time.

Round two got underway and Maynard inexplicably stopped punching. He started circling and posing. Edgar started sticking and moving. His foe started pulling straight back with his head up and his left arm extended, leaving himself wide open for more shots. He stopped countering. And that is when Edgar took over.

I have no idea how Edgar survived the opening round. It was basically a carbon copy of the heart he showed in his January bout with Maynard. This time, however, he responded to adversity with even better offense than before. He showed killer instinct by knocking out Maynard, something that I thought was next to impossible for the Jersey-based fighter, in the fourth round.

Edgar deserves serious respect as the champion. He won the title from one of the greatest fighters of our generation, BJ Penn. Successfully defended it against Penn in an immediate rematch. Survived a devastating first round in his next fight against Maynard, the only man to ever defeat him, and somehow found a way to pull out a draw. And then he settled the score by stopping Maynard in the third installment of their war, after having to again survive a savage beating in the opening round.

WHY DID MAYNARD SHUT IT DOWN?

That is the proverbial $64,000 question after the main event of UFC 136. Was he injured? Did he once again gas out during his first-round onslaught?

Only Maynard and those closest to him know the real truth. All I know is that Edgar was a beaten man when he retreated to his corner in between the first and second round. All Maynard needed to do was come out in the second, land a few good shots early, and remind Edgar that the nightmare of the first round wasn’t yet complete.

I’m sure Maynard is bitterly disappointed in himself right about now. Understandably so. He lost the fight as much as Edgar won it, if you know what I mean. I’m not trying to be hyper critical. I just don’t understand why he shut it down after the first round. That decision will forever haunt him, particularly if he never wins the UFC 155-pound title. He will always wonder what if. So will I.

When most people talk about pound-for-pound greatness in mixed martial arts, they typically discuss only two names: Anderson Silva and Georges St-Pierre. Those in the know also throw around the name Jose Aldo.

Aldo handled a much bigger, exceptionally well rounded Kenny Florian with relative ease on Saturday night. It was his 13th consecutive win. GSP has never enjoyed a 13-fight winning streak in his career. His longest is nine—his current winning streak.

Silva, on the other hand, is in the midst of 15-fight winning streak. Not to mention the fact that two of those wins came in a division 20 pounds north of his division home. Plus, he has the UFC record for most consecutive title defenses.

Silva is, in my opinion, the unquestioned pound-for-pound king. But I think that the number two spot is a toss up between GSP and Aldo.

It will be interesting to see if Aldo continues to dominate at 145, or if he will opt to move up to lightweight to continue to build his legacy. He has an extremely difficult time cutting to the division maximum, so a move north may be all but set in stone at some point in the near future.

For the time being, he is without a shadow of a doubt the very best featherweight on the planet. And he continues making his case for consideration as the number two guy on the pound-for-pound list.

WHAT IS LEFT FOR FLORIAN?

Florian is now 0-3 in UFC title fights. It is tough to imagine him receiving another title fight any time soon. Not unless Aldo is dethroned in the short term. That makes for a seriously uncertain future for the affable fighter.

Don’t get me wrong. There are plenty of interesting fights for Florian at featherweight. But one must wonder if he will have the same motivation to train hard, follow a strict diet, and live the monk-like lifestyle that has helped shape him into arguably the best fighter in the UFC never to win a title.

Fighters fight for two reasons: winning championships and paying the bills. That is a gross overgeneralization. I know. Still, the statement has some merit. Remove the first reason from the equation, and that leaves paychecks as the sole motivation for KenFlo. I don’t know him personally, but it seems unlikely to me that money is a sufficient motivation for a true martial artist like Florian.

This may very well be the most devastating loss of KenFlo’s career, because this is the one that will weigh on him the most mentally. It is tough to imagine what will motivate him to continue striving for greatness, knowing that he may never receive another shot at a title, in any weight class. Then again, if anyone can find a silver lining in this situation, it is probably Florian.

IS THERE ANY DOUBT WITH SONNEN?

Sonnen’s utter annihilation of highly regarded Brian Stann after a 14-month layoff was a vivid reminder of that fact. No other man in the UFC has come close to defeating Silva. Sonnen came within 2 minutes of doing just that. He dominated Silva for 23 minutes, just like he dominated Stann on Saturday night.

Sonnen’s request to fight Silva on Super Bowl weekend is a great idea, if anyone wants my opinion. I absolutely love his “upping of the stakes,” to use his quote. He wants Silva to retreat to light heavy, if he wins the title. If he fails to win the title, Sonnen claimed he would leave the UFC.

I’m sure that was bravado. I don’t see Sonnen retiring if he loses to Silva. But it was an exceptional sound bite. Sonnen is full of those. He is the king of the one-liner. He is the undisputed champion of trash talking. And he may very well be the best middleweight in the world—he certainly thinks so.

PHAN EVENS THE SCORE; LET’S DO IT ONE MORE TIME

Leonard Garcia received a gift decision over Nam Phan in Las Vegas back in December 2010. There were no gifts at UFC 136. He instead received a beating from Phan in Houston.

Garcia and Phan will forever be linked due to their two scintillating fights. Despite the fact that the second bout ended with a clear cut winner, Garcia still thrilled the crowd with a third-round knockdown and 15 full minutes of crazy, all-out attacking, proving that he is one of the most exciting fighters in the promotion, bar none.

Phan was all-action in his own right. He isn’t always the most exciting fighter in the world, but when you put him in the cage with Garcia, it brings out the absolute best in him. Phan turns into a whirling dervish.

For those who also watch boxing, Phan and Garcia are eerily reminiscent of Arturo Gatti and Micky Ward. Their three fights, which ended with Gatti winning twice, were three of the best fights I’ve ever seen. Another example would be Marco Antonio Barrera and Erik Morales, with Barrera winning twice.

MMA needs a good trilogy in that same vein. Let’s run it back. What do you say, Dana White?

LAUZON BEATS GUILLARD AT HIS OWN GAME

Joe Lauzon knew he could not outstrike Melvin Guillard over the course of three rounds. If the fight devolved into a kickboxing-only bout, he was a dead man walking.

Oh, wait a minute. Lauzon didn’t receive a copy of the memo. He stopped Guillard in less than a minute and used a punch to get the win. He didn’t knock out Guillard, but he put him on ice skates with a counter left when Guillard jumped in with a lead left uppercut to the body. The New Orleans native left his jaw wide open when he threw the punch, and Lauzon took full advantage of the situation, re-establishing himself among the always robust group of lightweight contenders.

The question for Lauzon is whether he will use this win to put together an impressive streak of performances. To date, he has not been able to win more than three consecutive fights in the UFC, and even that feat (which he accomplished just once) is dubious, since it was interrupted by his stint on “The Ultimate Fighter,” where he came up short.

Lauzon has all the tools to be great. Consistency is his enemy. Let’s see if he can fix that in 2012.

BACK TO THE DRAWING BOARD FOR GUILLARD

Guillard was on the cusp of his first UFC title shot. All he had to do was defeat Lauzon. He couldn’t do it, ending his winning streak at five. There is no doubt that UFC President Dana White will make Guillard win at least one more fight, likely more, before he is back in a position to fight for a title. With 155-pound monster Gilbert Melendez expected to head to the UFC sooner rather than later, Clay Guida and Ben Henderson trying to make their claim, and the fact that the lightweight division is the most stacked in the UFC, one must assume that Guillard is now well back in line, which is too bad. He is one fun fighter to watch. Win or lose, his fights are rarely boring.