From Davis to Machida to Matyushenko to Ortiz...recreating the UFC 133 main event 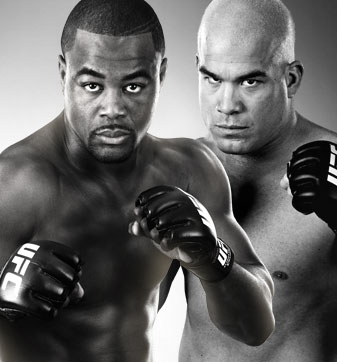 Last week was just another typical week for UFC President Dana White, meaning that – as he’s reminded us in the past - when he woke up in the morning, something bad was going to happen.

It did. Unbeaten light heavyweight Phil Davis had injured his knee and had been unable to kickbox for two and a half weeks. Hey, injuries happen all the time, especially in a fight sport where it’s necessary to fight in the gym to prepare. The only problem here was that Davis was in the UFC 133 main event on August 6th with Rashad Evans.

Yep, something bad happened. So White and his team arranged an MRI for Davis for Monday of this week and began making calls to secure a backup plan should “Mr. Wonderful” not get cleared to compete.

“I called Tito Ortiz,” said White during a Thursday media teleconference. “He told me that he had some personal stuff going on and he didn’t want to jump back into training camp (following his UFC 132 win over Ryan Bader earlier this month). So I moved on and called Lyoto Machida, who has been terrorizing me for a fight for a long time and says he’s wanted to fight. He accepted the fight and was very excited about it.”

After his MRI, Davis was ruled out of the fight, though as White puts it, “Phil Davis still one hundred percent wanted this fight.” Cooler heads prevailed, and White picked up the phone to confirm things with the Machida camp. Then things got interesting again.

Now Evans had no opponent again. Through it all, the former light heavyweight champ continued training in Boca Raton, Florida, and when he spoke to White, he made it clear that he wasn’t going to be a holdup in the process whatsoever.

“I was bouncing around names,” said White, “and his (Evans’) answer was ‘I don’t care who you get. You don’t have to call me and approve the opponent with me. Whoever the opponent is, I’m in and I’m ready to fight.’ So Rashad was ready to go.”

With Ortiz and Machida off the board and the fight creeping up in a matter of weeks, the next name on the list was going to be Vladimir Matyushenko, who was already scheduled to face Alex Gustafsson on the UFC 133 card. “The Janitor” (who ironically wound up withdrawing from the Gustafsson fight Thursday due to his own injury) had rescued Zuffa for a main event before back in 2001, when he faced Ortiz for the light heavyweight title at UFC 33.

But then Tuesday night, White got a phone call.

It was Tito Ortiz.

“He asked if we had filled the spot for the main event,” said White. “We hadn’t. Tito said ‘Let me talk to my team tonight, I’ll call you back tomorrow.’ He called me yesterday (Wednesday) and accepted the fight.”

UFC 133 had a main event again, and in a lot of ways it’s an even more intriguing one than the original. Evans and Ortiz have a history, with the two fighting to a three round draw back at UFC 73 in 2007. Evans is coming off a long layoff and looking to secure a shot at the winner of the light heavyweight title bout between Jon Jones and Quinton “Rampage” Jackson. And Ortiz, well, after going 0-4-1 over a nearly five year stretch, “The Huntington Beach Bad Boy” resurrected his career with a first round submission win over Ryan Bader at UFC 132 on July 2nd, and at the moment, he just may be the hottest name in the sport.

His resurgence even shocked White, who made it clear before the Bader bout that if Ortiz lost, his career in the UFC was over.

“It’s a very interesting, cool story in how he’s turning this thing around,” White continues. “But if you remember, before the last fight, I said Tito Ortiz fights best when his back’s against the wall. The other thing about Tito is that he’s been a one-dimensional fighter his whole career because he could be. Tito was so good at taking you down, putting you against that fence and smashing you, he didn’t have to do anything else. He didn’t have to take any risks. But Tito’s got really great jiu-jitsu. And I respect Tito for stepping up and taking this fight.”

What a difference 1:56 (the time it took Ortiz to submit Bader) makes.

“If Tito beats Rashad on August 6th, how could anybody deny him,” asks White. “He beats a top ten contender in Ryan Bader then comes in and knocks off who many believe is the number one contender for the title. It would definitely put Tito in the mix.”

Sounds like there are going to be some fireworks in Philadelphia in a couple weeks. As for the Evans-Ortiz bout itself, White breaks it down:

“It’s an interesting fight. What you would say is Rashad’s younger, he’s faster, he’s an explosive athlete, he’s probably got faster hands, and he’s probably a better wrestler by now.

“I said the same thing about Ryan Bader. Then Tito almost knocks him out and then submits him.”