At UFC 133 in Philadelphia on August 6th, Mike Pyle will revisit the role of spoiler against Canadian phenom Rory MacDonald... 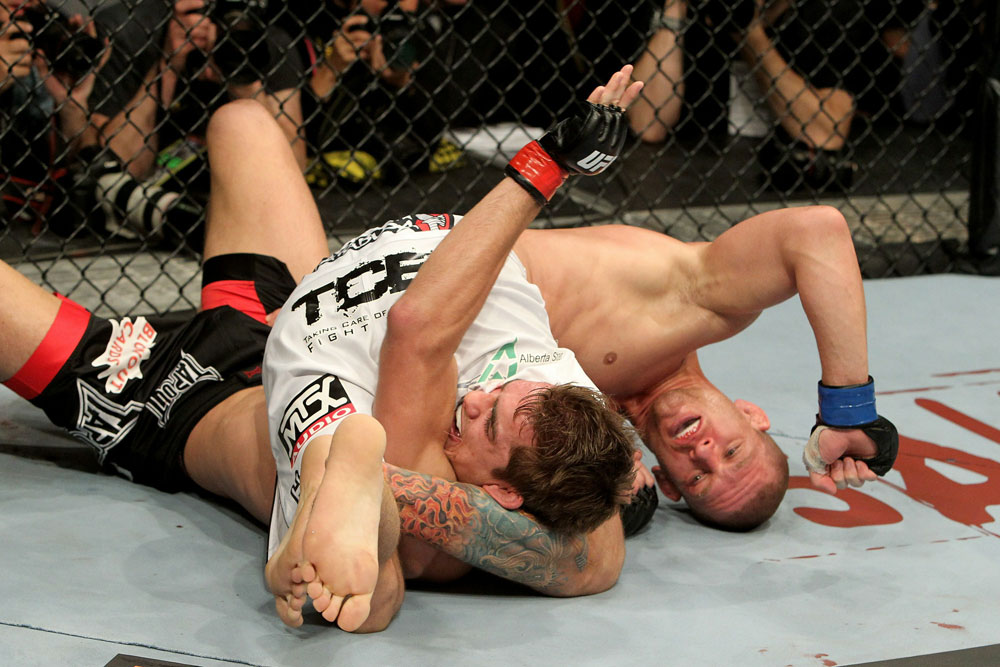 Let me know if you’ve heard this one before – hot welterweight prospect meets seasoned vet in a bout that may introduce the prospect to the ranks of contenders if he wins. But winning is a big “if” against this particular veteran. Yes folks, at UFC 133 in Philadelphia on August 6th, Mike Pyle will revisit the role of spoiler like he did against then-unbeaten John Hathaway last year. This time, the youngster he’ll be trying to pull off his wily tricks against is Canadian phenom Rory MacDonald, and this one has the makings of yet another intriguing battle on the upcoming Pay-Per-View event.

This Friday, British Columbia’s MacDonald turns 22. But if you’ve been following the sport over the last few years, you’ve been hearing about him since he was a teenager, and considering that he’s been a pro since the age of 16, it’s clear that he has the kind of experience few his age can claim. He’s an old soul, mature and focused on his fight game, so the usual caveats put on the heads of young fighters really don’t apply here. Even before his UFC debut 2010, he tested himself on the Canadian scene with bouts against fellow young gun (and recent Strikeforce signee) Jordan Mein and veteran Clay French. So if Pyle is expecting a green kid in the Octagon on August 6th, he may be in for a surprise.

Then again, with nearly 11 years in the fight game, Pyle can look at anyone he faces as a virtual rookie. This is a guy who made his pro debut against Quinton “Rampage” Jackson, then decided a good second bout would be Jon Fitch. In other words, Pyle has always been a fearless competitor, and while he’s had his ups and downs over the years, his technical skill and veteran poise usually serves him well when the bell rings, and at 35, the Tennessee native and Las Vegas resident is undergoing a career upswing in the UFC.

To say MacDonald was crushed by the lone loss of his pro career, a third round stoppage at the hands of Carlos Condit, would be a huge understatement. Calling the aftermath of the UFC 115 defeat a year ago “a dark time,” MacDonald didn’t moan about the fact that he was halted with only seven seconds left in a fight he was on target to win on the judges’ scorecards. In fact, he took a mature “mea culpa” approach to the final result, even though you can tell it hurt him just to talk about it. “I made some crucial mistakes in the last round, and it was hard for me to deal with because it set me back in my career.”

So the question that remained was whether the loss was the kind of defeat that would haunt him forever. Simply put, some fighters don’t come back the same from fights like that. And MacDonald didn’t come back the same – he came back better, dominating Nate Diaz in their UFC 129 bout in April. MacDonald didn’t just win the decision clearly; he manhandled Diaz, which is something you just don’t see. To say he bounced back in style from the first and only loss of his career doesn’t do his comeback justice.

In the Pyle corner, “Quicksand” has had an interesting little run in his last three bouts. Following losses in two of his first three UFC bouts, Pyle was seemingly headed toward Journeymanville, but late in his bout with Jesse Lennox in June of 2010, he exploded and finished his opponent. It was as if a switch was flipped and he realized that he had the talent and experience to hang with anybody; he just had to go out and take the victory. He did it with Lennox, and it was even more evident when he took on highly-touted and unbeaten Brit John Hathaway at UFC 120. Hathaway was coming off an upset of Diego Sanchez and was riding high. Pyle took the play away from the “Hitman” immediately though, dominating all three rounds en route to a decision win. But the telling bout of the string may have come against Ricardo Almeida in March. Pyle will probably be the first to tell you that it wasn’t his finest hour, but the fact that he was able to find a way to win shows you where he’s at in his career. It looks like he’s figured things out, and when you can pull off a victory when you’re not at your best, it gives you even more confidence that when you’re on, nobody stands a chance with you.

Though MacDonald won’t want to hear this considering how hard he took the Condit loss, if he falls short against Pyle, it won’t hurt him on the welterweight landscape as much as a defeat will hurt the Vegas veteran. At 35, this is a must win for Pyle – not necessarily in terms of job security, but in terms of him making a run towards a title shot in the coming year or two. That urgency will probably be evident on fight night, and it will be matched by the intensity of MacDonald, who will pull out all the stops to make sure that “1” in his loss column never increases.

WHAT TO LOOK FOR

There is plenty on the line for both fighters, and you can expect them to fight like it. Pyle is more methodical in his approach, but as he showed against Lennox and Hathaway, he can be an aggressive and punishing force when he wants to be, and his finishing record (17 of his 21 wins have come via submission) speaks for itself. Given the hype behind MacDonald, “Quicksand” just might turn on the jets early in order to test the youngster wherever the fight goes.

On paper, the big edge for MacDonald may be his strength and pressure, the keys to his win over Diaz. In fact, if you look at Pyle’s last two losses, they have come to hard-charging powerhouses Jake Ellenberger and Brock Larson. Of course, if MacDonald tries to steamroll his foe, Pyle has the ability to pull off a submission at a moment’s notice, so expect measured aggression from the prospect as he looks to make his move on the top ten.