Two of the most experienced fighters in the game, Brian Ebersole and Dennis Hallman, meet at UFC 133 on August 6th. 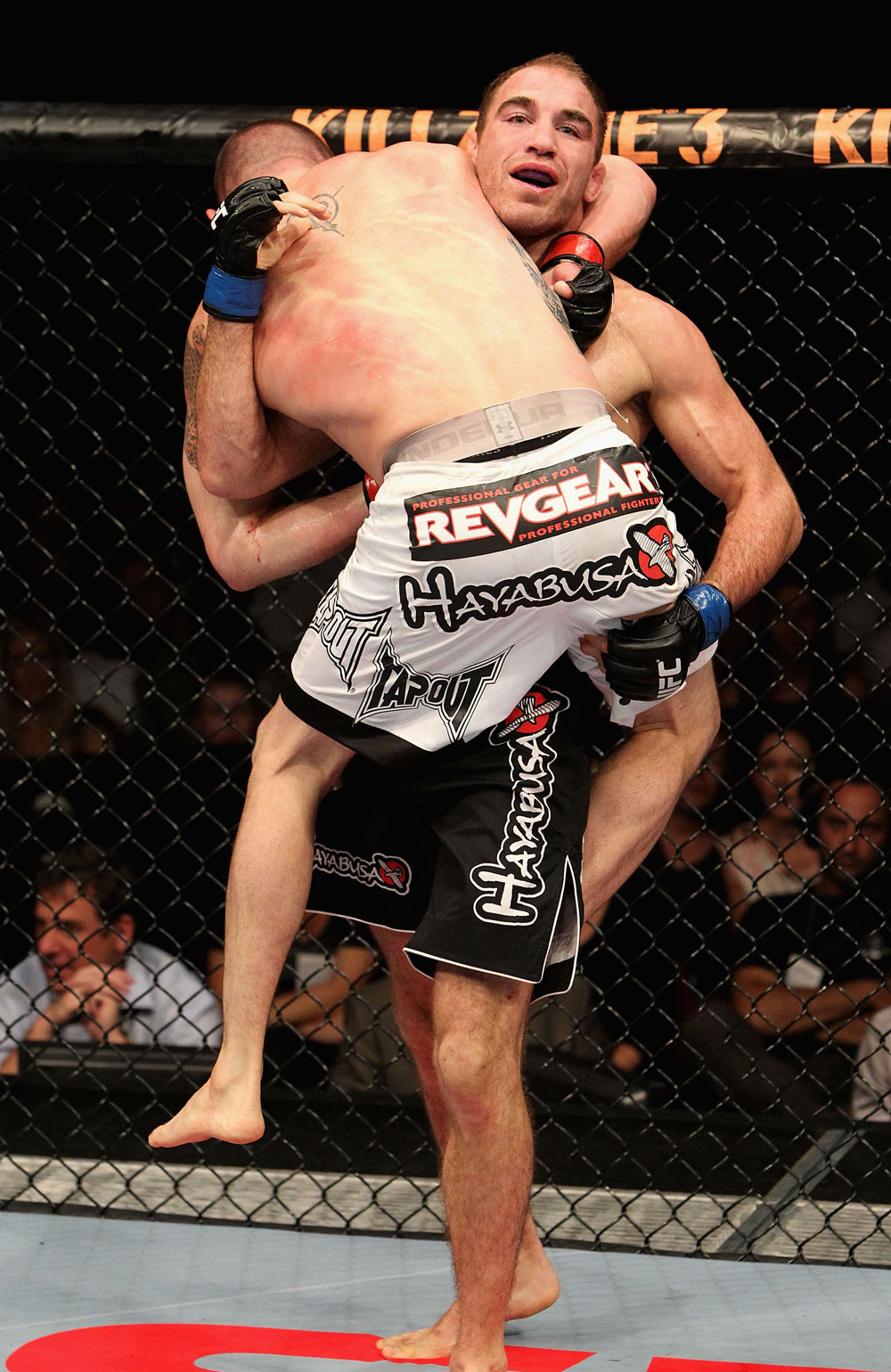 When Brian Ebersole and Dennis Hallman step into the Octagon at UFC 133 on August 6th, they will do so with nearly 150 combined pro fights of experience. Kinda gives a new meaning to the word “veteran,” eh?

What this means for those tuning into the Pay-Per-View broadcast from Philadelphia is 15 minutes or less of high-level mixed martial arts. These are two fighters who have seen and done it all in the sport, so the outcome of this welterweight bout won’t be predicated on superior technique, experience, or athleticism, because those three attributes may very well be deadlocked. It will probably be decided by the fighter who makes the least amount of mistakes, and these guys don’t slip up often.

WHERE THEY’VE BEEN
This section alone could go on for days considering that Hallman has 82 fights and Ebersole has 63, so we’ll go with the Readers Digest version here.

A native of Washington State, Hallman turned pro in 1997, and though he had his share of local bouts, what may be most notable was his willingness to go out of town to fight. The Midwest and Japan were familiar locales for “Superman,” and he never shied away from top-notch opposition.

Best remembered for his two submission wins over UFC Hall of Famer Matt Hughes (which lasted a combined 38 seconds), Hallman parlayed those wins into a UFC lightweight title bout with Jens Pulver in 2001. But what began as a grudge match turned into a dud match, with Pulver grinding out a five round decision win. He would only grace the Octagon twice more in the next eight years, losing both bouts against Frank Trigg and Jorge Rivera, before returning in 2009.

Hallman lost his first return bout, getting knocked out by John Howard with just five seconds left in a fight he was dominating. But after the bout, he was diagnosed with Celiac disease, which was greatly affecting his cardio. After getting treatment and cutting gluten from his diet, he got a new lease on his career, and has since won two bouts over Ben Saunders and Karo Parisyan.

Ebersole, like Hallman, has also logged over a decade in the fight game, and he’s got his own version of Murderers Row filling up his record. From Stephan Bonnar, Tony Fryklund, and Ed Herman to Matt Horwich, Kyle Noke, Carlos Newton, and Hector Lombard, the Indiana native paid his dues both on the harsh Midwest “Meat Grinder” circuit, and on the road. In 2007, he really took his show on the road, relocating to Australia. It was the best move he ever made, as he’s won eight in a row down under, including the most important victory of his career, a three round decision win over Chris Lytle in his UFC debut in February.

WHERE THEY’RE AT
As mentioned previously, Ebersole has won eight in a row and 12 of his last 13. At 30, it may also be safe to say that he is currently in his prime. He’s also been one of the great stories of 2011, a guy brought in on short notice to face Lytle and who not only pulled off the win, but did so with an unorthodox, yet entertaining style, and grabbed a Fight of the Night bonus as well. If fighters were stocks, you would want to buy plenty of Brian Ebersole.

Hallman has not made the media rounds with the regularity that Ebersole has in recent months, so there’s not much chatter about the resurgence of “Superman,” but his last two wins are as impressive as anything you’ll find these days. Against hot prospect Saunders, Hallman pulled off what many would have considered an upset at the time, nullifying the striking of his opponent and finishing strong en route to a decision win. And his knockout of Parisyan was just shocking in its brevity and finality. Why? It was the submission expert’s first knockout win since 2001.

WHERE THEY’RE GOING
The winner of this bout won’t find himself in the title picture just yet, as you assume the next bout 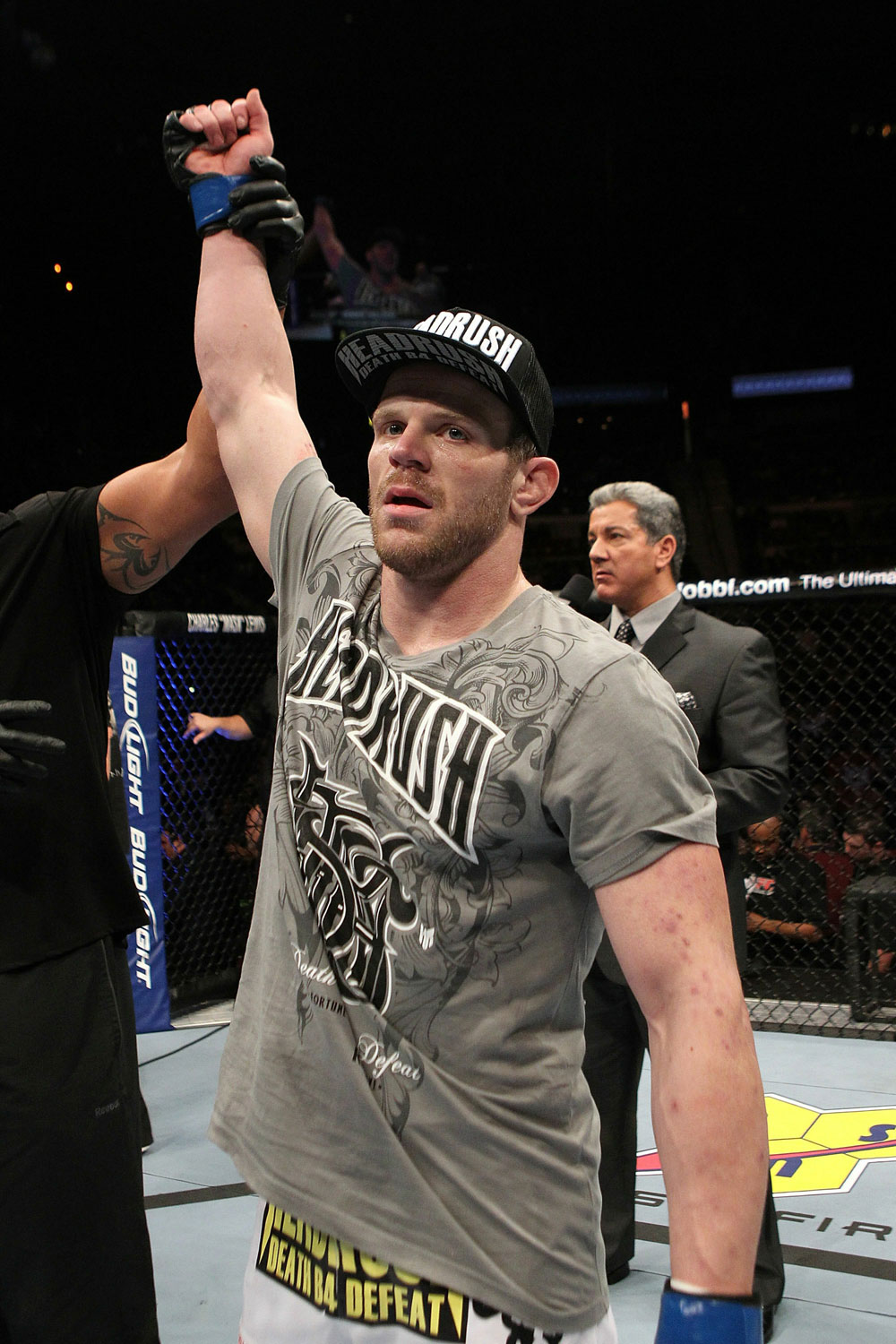 would be against one of the division’s young guns, then the next against a contender before title shot talk will begin. But that doesn’t mean the stakes aren’t high. When you’ve been around this long, respect is a big thing, and to get a win over a peer with the same level of veteran experience, that’s a nice feather to have in your cap.

WHAT TO LOOK FOR
Despite his knockout of Parisyan, Hallman is first and foremost a ground fighter, so don’t expect him to suddenly think he’s Chuck Liddell. Knowing that you can crack someone and hurt them is a confidence boost though, and it wouldn’t be surprising to see Hallman more willing to test his standup. And while he’s gotten older, at 35 he’s shown that he still has gas in the tank, which means a quick submission win is not out of the question if he catches Ebersole sleeping for just a moment.

Ebersole’s strength is that his opponents never know what’s coming next. He was able to completely baffle Lytle in their bout, and expect more of the same this time. Ebersole has been around long enough to be comfortable wherever the fight goes, but considering that he has never been knocked out in his career, and that Hallman has been stopped by strikes five times, he may want to press the action on the feet and take away any ground advantages the submission specialist may have.

EBERSOLE ON HALLMAN
“He's won more fights than me, thus far. I need to catch up, so preventing him from putting a win on the board while gaining one myself is paramount to my cause. With so many fights and so many years of training under his belt, I can't do anything that he hasn't seen before. I just need to do a few things very well. His skill set is fantastic, having submitted many. I’m hoping I can frustrate him with my submission defense, as I did with Lytle, and keep myself on the offensive.”

HALLMAN ON EBERSOLE
“Brian is a difficult guy to prepare for. He is so unorthodox, so I have to prepare for all of his antics. His biggest strength isn't his skill, it is the fact that he is so comfortable in the cage that he can pull off anything.”