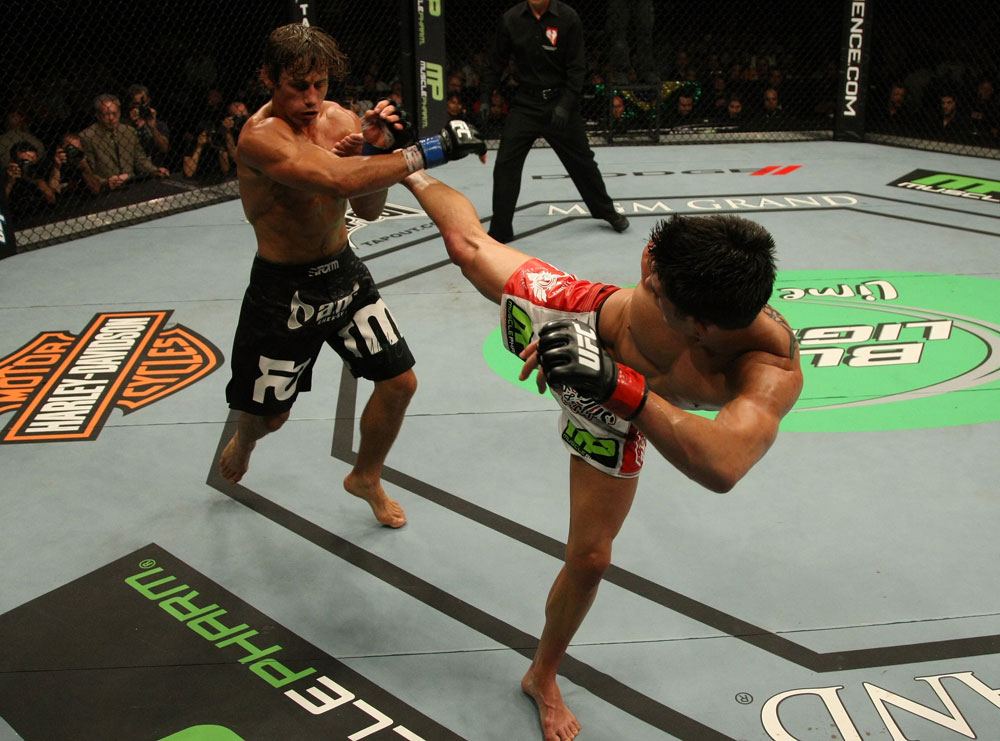 CRUZ EVENS THE SCORE; LET’S RUN IT BACK

Dominick Cruz proved on Saturday night that he is the best bantamweight in the world—at least, in most people’s minds. The judges tapped the tall, lanky champion as the victor over world renowned challenger Urijah Faber, but more than a few thought that the “California Kid” did enough to win the fight. For the record, I’m among those people. Nonetheless,  any time a fighter hunts and pecks, as Faber did throughout the fight, rather than taking some risks to get in there and brawl, he has nobody to blame but himself for the loss.

That is right. Even though I felt that Faber won, I cannot argue with the judges’ decision. Leaving a fight to the discretion of three individuals is always a risk. Faber could have taken more chances. He didn’t. The fight was close. Cruz was awarded the decision. Who cares if it was 50-45 or 48-47? A loss is a loss.

What matters to me is that Cruz and Faber are now 1-1. It makes a lot of sense to begin thinking about a rubber match. I’m not suggesting that an immediate third fight is necessary. I think it would probably be better for everyone to have the pair fight different opponents on the same card, further hyping the rubber match and giving each man a chance to prove that he is a better offensive fighter than what he showed on Saturday. Nonetheless, a third fight is as warranted as any three-fight series that I can recall.

Keep in mind that Faber was dominant in the first fight, scoring a first-round stoppage. Cruz was, at best, awkwardly effective in the rematch. Where Faber erased all doubt with a submission win, Cruz raised further questions by letting his opponent stick around for five full rounds without really throwing anything of real effectiveness. Those questions can all be answered if these guys run it back.

Faber’s initial reaction when Bruce Buffer read the judges’ decision said it all. He pulled his arm away from referee Steve Mazzagatti and took several steps toward his teammates in obvious frustration. He felt that he did enough to win the fight, and knew beyond a shadow of a doubt that the judge who scored every round for his opponent should, at a minimum, be forced to complete some sort of training exercise to learn how to properly score a fight.

Yet, by the time Joe Rogan interviewed him, Faber was as gracious as anyone that I can remember who just dropped a close, controversial decision. Sure, he stated that he thought he won the fight. Yet, there was no protesting about the decision. He gave full credit to Cruz for doing what he needed to do in order to win. He blamed himself for not being more aggressive in search of a finish. And he thanked the fans for supporting the event.

After more than a decade of wacky judges’ decisions, fighters know that they take major risks if they don’t press hard to finish a fight. Hunt-and-peck standup exchanges and quick ground transitions without legitimately close submission attempts make a fight exceedingly difficult to score. Guys should know this by now. Faber certainly does, which is why he handled the loss like the gentleman that he is.

Other professional athletes should take note of the “California Kid’s” graciousness and class in defeat.

RETURN OF THE CAT SMASHER

It is shocking to me that so many people are expressing surprise over Chris Leben’s 27-second knockout win over Wanderlei Silva. This fight had nuclear bomb written all over it from the moment that Dana White announced the matchup.

Silva did just what I predicted in my pre-fight feature: he came out full throttle with wild hooks in true berserker style. Leben reacted just like I predicted: he planted his feet and swung back with all of his might. It just so happened that Leben pressed his own reset button before the Brazilian pressed his.

It was the most intense, action-filled 27-second fight that I can remember in all my years covering or watching mixed martial arts. That is why it was my personal choice for both Fight of the Night and Knockout of the Night. Fights like that don’t happen unless both men are willing to put themselves squarely in harm’s way while searching for a knockout victory. Nobody can ever claim that the fans don’t get every penny’s worth of excitement and action out of a Chris Leben or Wanderlei Silva fight. Put those two together and something special is bound to happen, just like it did on Saturday night.

The win catapulted Leben’s standing in the middleweight division. Remember that this is the same Wanderlei Silva who beat Michael Bisping and was ultra close to defeating Rich Franklin in his last two bouts. Leben’s annihilation of the “Axe Murderer” firmly entrenches him among the best in the division, all but erasing the bitter taste of his knockout loss to Brian Stann back in January.

I know he prefers to be called the “Crippler,” but for my money, the “Cat Smasher” is back!

ORTIZ SALVAGES CAREER; NOT A CONTENDER JUST YET

I don’t think any superstar has faced the same dire situation as Tito Ortiz did on Saturday night. Mired in a 57-month run without a victory, the former champion entered the Octagon to face upstart 205-pound prospect Ryan Bader in a fight that had “passing of the torch” written all over it. Indeed, MMA oddsmakers labeled Ortiz the biggest underdog of his career heading into the fight—to the tune of 5-1.

To add to the already suffocating pressure, White was very clear heading into the fight that Ortiz’s career in the UFC would come to an abrupt end if he did not win—period.

In one of the true feel good moments in professional fighting, Ortiz responded by turning in his most dominant performance in a decade. No, I don’t count the two fights against an aging Ken Shamrock as equal feats. Those really were passing-the-torch bouts. Ortiz hasn’t looked as good as he did on Saturday night since his brutal first-round stoppage win over Elvis Sinosic at UFC 32.

You read that correctly – UFC 32. More than 100 UFC events have taken place since that June 2001 evening, several of them when Ortiz was the unquestioned kingpin of the 205-pound division. It was good to see the “Huntington Beach Bad Boy” resurrect his career in such dominant fashion against a guy that many believe has the tools to someday become champion.

But let’s not get ahead of ourselves just yet. The win proves that Ortiz remains a viable commodity in the ultra-deep light heavyweight division.  It does not, by any stretch of the imagination, prove that he is once again a top contender. I’m not saying that Ortiz doesn’t have the skills to once again contend for a title—not at all. I’m only stating the obvious point that a guy who was 0-4-1 in his last five bouts needs more than one win to put him back into contention. The win, however, definitely puts him in the mix for future marquee matchups as he tries to fight his way back into contention.

Well done, Tito. The world counted you out one too many times. It’s great to see you back.

GUILLARD PROVES THAT THE RIGHT CAMP MEANS EVERYTHING

How many times has Mike Goldberg or Joe Rogan stated that, in their opinion, Melvin Guillard is the best athlete in the UFC? You know what, I agree with them. This kid has all the tools to be great. Very few fighters enjoy the same blend of insane speed, devastating power, and jaw-dropping coordination. Yet, the early part of Guillard’s UFC career was an extreme rollercoaster ride of highlight-reel knockouts and puzzling defeats.

Then, he decided to begin training with Greg Jackson. Five wins later, including a win over highly regarded Evan Dunham, Guillard stands among the best in the 155-pound division. Another win or two and it will be difficult to deny this kid his first title shot. His star is rising that quickly.

Guillard’s career turnaround has been nothing short of amazing. Again, he has always had all the physical and athletic tools to be great. He never enjoyed the full potential of those tools until he began training with a world-class team. Young fighters should take note of that fact.

To be clear, I’m not suggesting that Guillard’s success is unique to his decision to join Team Jackson.  Jackson is undoubtedly one of the best trainers in the world, and his talent-laden stable of fighters ensures that everyone has top-notch training partners on a regular basis. But there are other gyms that offer similar situations, like the American Kickboxing Academy, Xtreme Couture, American Top Team, among others. The point is athletes wanting to maximize their odds for success should seek out the best training that they can find, just like Guillard did after his disappointing loss to Nate Diaz back in September 2009.

Carlos Condit knows what it is like to be a champion. The elite 170-pound mixed martial artist ruled the WEC’s welterweight division before it was folded into the UFC. And then he fell into the abyss of being just another fighter as he was folded into a division with established stars like Josh Koscheck, Jon Fitch, BJ Penn, Mike Swick, and a dozen other household names, in addition to welterweight mega star Georges St-Pierre.

After walking through previously undefeated Dong Hyun Kim like a knife through warm butter, Condit is anonymous no more. This guy has definitely established himself as one of the very best in the division with wins over Dan Hardy, Jake Ellenberger, Rory MacDonald, and now Kim. The question is whether he is ready for his first shot at UFC gold.

With GSP occupied until the end of the year with his upcoming title defense against Nick Diaz, Condit doesn’t have to answer that question just yet. It would be crazy for him to sit on the sidelines for the next 8-10 months while campaigning for a title shot. That is not the way to peak for a guy like GSP. Condit instead needs to keep busy, preferably by testing himself against one of the myriad of former title challengers who still stand among the very best in the game.

The two names that instantly come to mind are Koscheck and Penn.

Both men are coming off injuries, though both should be able to fight before the end of the year, which is perfect timing for Condit. A bout with either guy would be a major test for the former WEC champion, one that he might not be able to pass. That is why a bout with someone like Kos or Penn is just what the doctor ordered to legitimize Condit’s claim to the number one contender spot.