Heading into Saturday’s title eliminator, contenders Junior dos Santos and Shane Carwin shared pretty similar careers to date. Both were 12-1. Both had developed reputations as monstrous punchers. Carwin had more of a reputation as a finisher, since he had finished all 12 wins in the first round. Dos Santos was known as being a little more well rounded, despite the fact that he was also thought of as having better boxing skills.

It was a bit of a shocking fight for pundits and fans who have been watching both men over the years. It wasn’t shocking that dos Santos won the fight. Many predicted that result. It was shocking that Carwin seemed extremely hesitant to pull the trigger, something that has never before been an issue with the giant heavyweight. 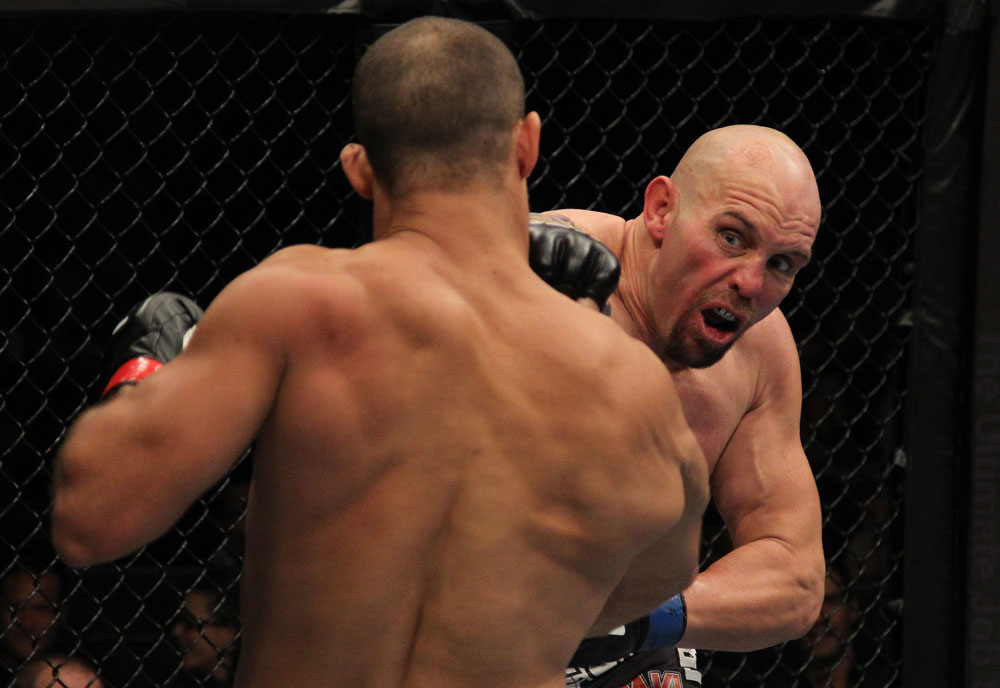 I don’t know if cage rust was an issue, or if Carwin’s reluctance to fire was due to dos Santos’ stinging counter strikes. It was probably a bit of both. Whatever the case, dos Santos proved beyond a shadow of a doubt that he is the number one contender in the heavyweight division and thus the most deserving first challenger for reigning champion Cain Velasquez.

Carwin, on the other hand, suffered his second consecutive loss, drawing into question where he stands among the division’s elite competitors. I think that is a bit of an unfair perception after losses to two great fighters like dos Santos and Brock Lesnar (the man who handed Carwin his first career loss). But mixed martial arts is a “what have you done for me lately” sport, so it is what it is.

The one thing fans will never again question about Carwin is his heart. He took a very bad beating thanks to the accurate, powerful strikes possessed by his opponent. The former interim heavyweight champion had multiple opportunities to quit. He could have taken the easy way out when his face was a crimson mask and it seemed like he could do no right in the fight. Carwin insisted on fighting on. That was an impressive moment, one that showed the strength of his fighting spirit.

Nevertheless, Carwin needs to get his train back on the tracks. Consecutive losses are one thing. Three straight losses are enough to at least temporarily derail the career of the best and the brightest.  He badly needs a win in his next bout to put a stop to the negative momentum.

Dos Santos is on the polar opposite end of the momentum spectrum. It is tough to recall someone with more positive momentum and confidence heading into his first heavyweight title shot than what the Brazilian currently possesses. Velasquez was probably equally red hot when he faced Lesnar, but it is tough to suggest that he was riding a higher high than what dos Santos is riding right now.

Velasquez-dos Santos is going to be one heck of a scrap.

When Kenny Florian stepped into the Octagon on Saturday night, he became the first man in UFC history to compete in four different weight classes. That will go down as a distinction that won’t likely be topped anytime soon. The question, though, is whether Florian will make the featherweight division his home for the foreseeable future.

He admitted, after defeating Diego Nunes, that cutting to the featherweight limit was the toughest thing he has ever done in his professional fighting career. He handily won the fight, but Florian looked a bit sluggish at times from the extreme weight cut. I would not put much stock into his energy levels or perceived strength at featherweight. Debuts like this one are rarely indicative of future performance. Florian will adjust to the cut. He will adjust his training camp weight so that he can more easily handle the trip down to 145 pounds. And he will perform much better next time out. I obviously cannot guarantee that, but I look to Rich Franklin’s history at middleweight as anecdotal evidence.

After a wildly successful run at 205 pounds, Franklin showed up for his 185-pound debut against Jorge Rivera looking extremely gaunt during the weigh-ins. He seemed to prematurely tire during the bout, something that was previously unthinkable for the well conditioned Franklin. Yet, he found a way to win late in the third round.

Franklin adjusted his training camp weight, making sure he was much lighter when it came time to actually make the cut down to the middleweight limit. He never again appeared gaunt on the scales, and his trademark deep gas tank has never again betrayed him.  A couple of fights later, Franklin was wearing middleweight gold.

I expect Florian to take the same path. I don’t know if he will ultimately win the title, but I suspect Florian will look much more comfortable at the weight next time out. If that happens, he is going to be a handful for any featherweight in the world. 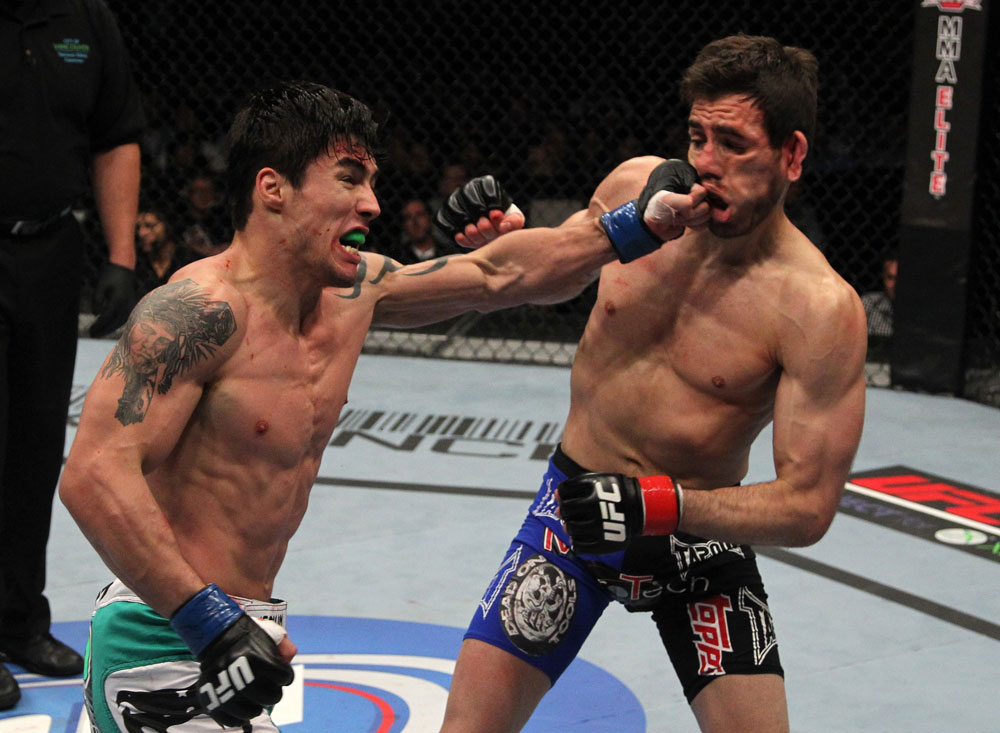 Dave Herman is a small heavyweight. The former collegiate wrestler only weighs 230 pounds. That is not much weight at all on his 6’4 frame. Indeed, Herman looked more like a light heavy standing across from his 261-pound foe, Jon Olav Einemo.  The size differential was so significant that I gave Herman little chance to win.

Boy, was I wrong.

Herman fought an excellent fight against a quality opponent. He showed excellent striking. Good takedown defense. Excellent scrambling ability. Solid chin. And the sort of killer instinct that one expects from top fighters.

In other words, this guy seems to have all the tools to be an excellent competitor in the UFC. The question, though, is whether he can make an impact as a UFC heavyweight. For what it is worth, I think he is a bit too small to really make waves in the heavyweight division. Keep in mind that most light heavies weigh between 215 and 225 pounds by fight time.  That means Herman is only five to 15 pounds heavier when he steps into the Octagon than Quinton Jackson, Jon Jones, Rashad Evans and many other top light heavies.

Now, compare Herman’s weight to other top heavyweights. Brock Lesnar has to cut significant weight to make the 265 weight limit. Frank Mir weighs 260 pounds. Carwin is five pounds lighter. Cain Velasquez tips the scales at 245 pounds. And JDS is the smallest among the top dogs at 240 pounds.

Some more time at the dinner table and in the weight room could serve Herman well during his heavyweight campaign. Then again, maybe a little time spent trying to shed a couple of pounds so that he could successfully cut to light heavy would be an even better idea.

Donald Cerrone undressed Vagner Rocha on the feet. It was a leg kick clinic. But it was far from a masterful standup performance.

Cerrone had a proverbial dead man in front of him during the third round. Yet, he refused to press the action against a guy who was not in his league on the feet. He instead chose to coast to a clear unanimous decision win.

Hey, winning is everything in every sport. I get it. There was no need for Cerrone to take silly chances against a guy who was getting completely outclassed. With that said, I was very surprised to see him refuse to plant his feet, sit down on his right hand and score a knockout win. In fact, I’d give Rocha the edge in terms of effective punches, which is crazy considering the skill differential between the two. 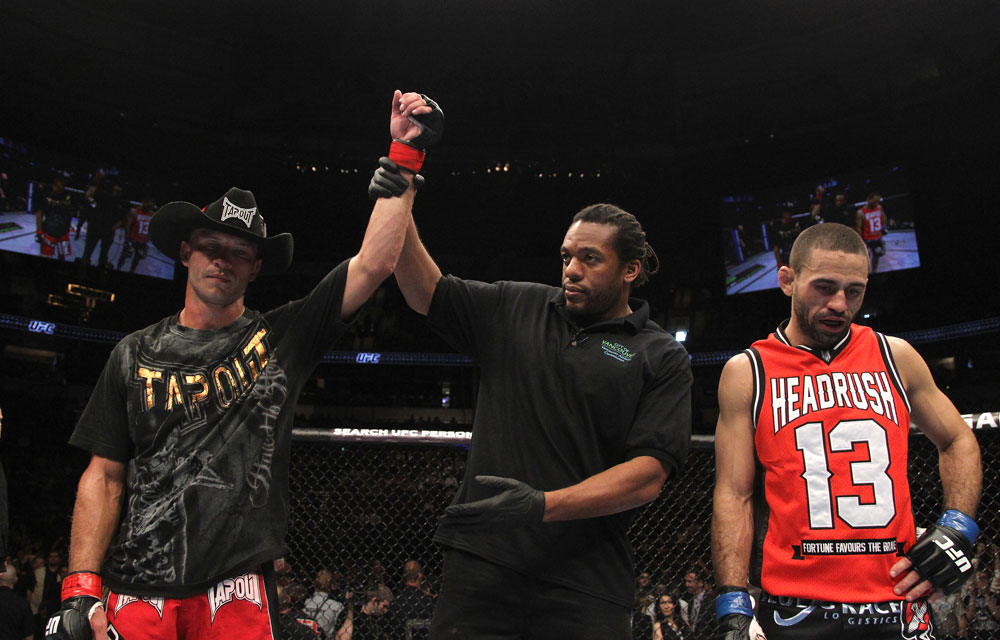 “Cowboy” admitted afterward that he was fighting not to lose, rather than fighting to win. That is an admirable admission from a guy who should have catapulted himself up the UFC lightweight ranks with his first knockout win in his professional career rather than fighting on leg-kick auto-pilot one fight removed from earning a Fight of the Night bonus in his UFC debut just a few months ago.

Yes, you read that correctly. Cerrone has never scored a knockout in his professional career. Nineteen fights. Fifteen wins. Twelve submissions. Three losses. One no contest. No knockouts.

Vagner should have been his first.

Sam Stout’s savage knockout win over Yves Edwards was more than the best knockout of the night. It may very well be the best of 2011. I know it tops my list so far.

The over-the-top left hook, which is a very unorthodox angle for a left hook, turned out the lights before Edwards hit the ground. Stout immediately pounced as his foe crumpled to the canvas, but he did not unleash the coup de grace. Sure, he stood and celebrated for a second. That is understandable. The adrenaline rush must have been amazing. But again, he did not throw that one extra “just to make sure” punch.

Stout’s decision not to fire any additional punches was a tremendous display of self control and an even better show of sportsmanship. Edwards did not deserve to get hit with another shot. He was already unconscious. The fight was over. Stout knew it.

A mixed martial arts bout is an athletic endeavor, not a true fight. It is about winning, not hurting someone. It is about one man testing his skills against those of his opponent. And Stout’s decision not to throw another punch was that of a consummate professional. Well done.