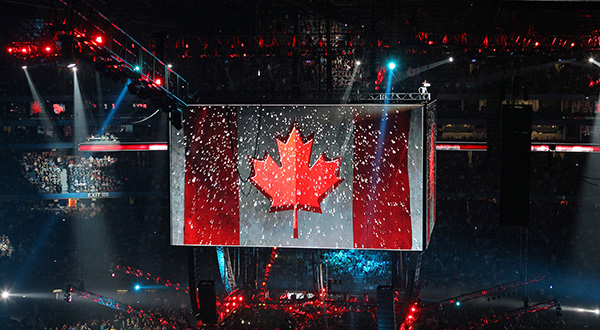 UFC 129 was always going to be a spectacle.

Not only was it the first event to be held in Toronto, Ontario, but rather than taking place at the Air Canada Centre, the Octagon was being set up inside Rogers Centre, the cavernous home of the Blue Jays and Argonauts. Outfitted with a half dozen massive video screens and configured to hold over 50,000 fans, the April 30, 2011 fight card was going to be the biggest event in UFC history.

Watching production rehearsals the morning of the event, it was obvious that everyone would pop for the increased pageantry that would accompany the final three bouts of the evening – personalized displays that would fill the collection of screens hung throughout the building, introducing the next athlete to make the longer-than-normal walk from backstage to the Octagon.

There were compelling stories scattered throughout the fight card that ensured this event captured the audience’s attention, like Randy Couture announcing that his bout with Lyoto Machida would be the final appearance of his career – for real this time – and the collection of Canadian fighters finally being able to compete in the country’s largest province for the very first time. 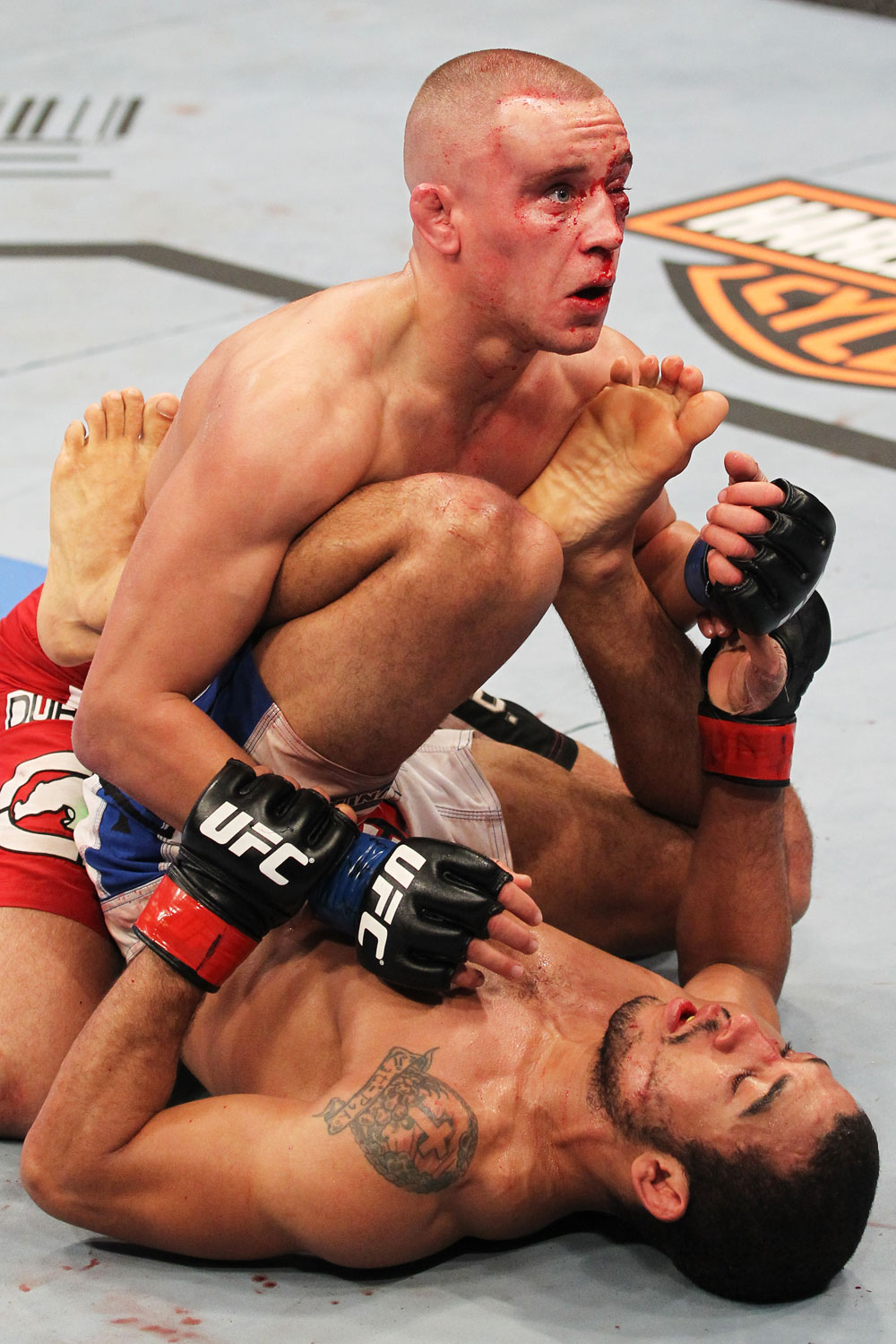 Included in that group was Mark Hominick, the London, Ontario native whose first appearance in his home province would come in a championship co-main event opposite featherweight titleholder Jose Aldo on the grandest stage the UFC had ever constructed. In addition to finally getting to compete close to home, Hominick and his wife were pregnant with their first child at the time and the due date coincided with the Shawn Tompkins protégé’s title clash with Aldo.

With all those components in place, there was no way that UFC 129 wasn’t going to be a memorable night, yet there was no way to forecast just how unforgettable that first venture to Toronto would turn out to be.

Looking out over row upon row of empty seats doesn’t have quite the same impact as watching more than 55,000 fans file into the venue and occupy their places in the sea of humanity that arrived to watch UFC 129 in person.

This wasn’t a crowd where only the hardest of hardcore fans filled the nosebleeds for the opening bout of the evening and the pricier seats up front slowly started filling up as the main card and main event drew closer. The fans packed the building as Pablo Garza and Yves Jabouin made their way to the Octagon and they were fired up from the very beginning.

Sound travels through a crowd like that in waves, starting with excited outbursts down front and reverberating back through each section in movements, gathering force and speed along the way. The roar of the crowd was impressive from the outset and became deafening by the time the main card kicked off, making it hard to communicate with the person next to you, not that words were necessarily needed.

It’s possible to share thoughts and feelings about a fight or event with the people around you without saying a word and this was one of those times.

Each successive stunning performance garnered a more exaggerated look of bewilderment, beginning with Garza’s flying triangle choke victory in the opener and culminating with Georges St-Pierre’s triumphant welterweight title defense against Jake Shields to close out the night, with a few stellar showings in between eliciting audible gasps and leaving everyone gobsmacked. 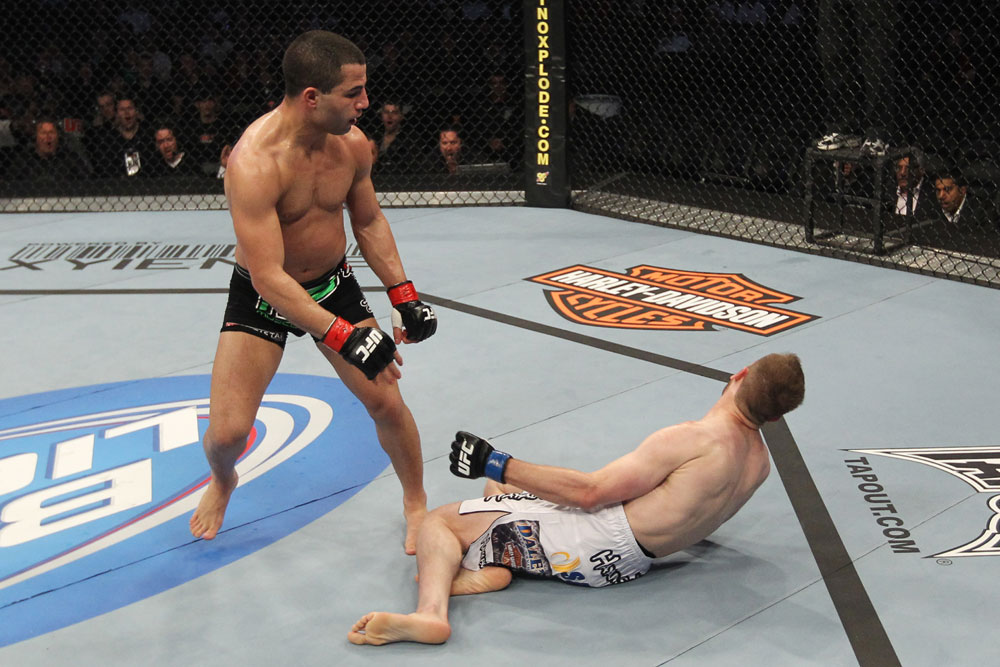 John Makdessi’s third-round spinning back fist knockout of Kyle Watson brought everyone out of their seats, and seeing Canadian MMA pioneer Ivan Menjivar earn a victory in his first UFC appearance in nearly seven years was heartening to anyone that knew the veteran’s place in the sport’s history in his home country.

Jake Ellenberger collapsing Sean Pierson with a looping left hand silenced the partisan crowd hoping to see the former Toronto police officer pick up a win at home, but they were back in full throat throughout the next contest as Rory MacDonald literally tossed Nathan Diaz around the Octagon.

Both Machida and Couture received massive ovations as they made their marches into battle, but the decibel level climbed several notches when “The Dragon” brought the legendary former champion’s career to a close with a jumping front kick straight out of Mr. Miyagi’s playbook. The vibrating roar was replicated once the fact that Machida had sent one of Couture’s teeth flying across the cage was isolated on the slow-motion replay as well.

But then the lights went down, a Canadian flag appeared on the gigantic screens above the cage and the soft opening chords of Diddy’s “Coming Home” began to ring through the rafters, signaling Hominick’s entrance, and a chill swept through the building. As much as the song quickly became overplayed, there was something undeniable about it bumping through the Rogers Centre as “The Machine” hustled his way towards the Octagon.

It was a homecoming nearly a decade in the making and a championship opportunity that was earned not just with an emphatic first-round knockout win over George Roop or the four additional victories that came before it, but through years of competing out of province, out of country and outside of the spotlight.

As always, the champion made the walk second and Aldo was once again led to the grand stage by his trademark soundtrack, “Run This Town,” which he started using when he walked into Urijah Faber’s hometown of Sacramento to face “The California Kid” and was a perfect musical accompaniment to Hominick’s equally poignant anthem.

While the entrances were exceptional, the fight started off in predictable fashion, with Aldo, who was at the height of his powers and making his first foray into the UFC cage, dominating the action early.

When the horn sounded to end the opening round, Hominick was cut under his right eye and a small goose egg was taking up residence on his forehead. By the close of the fourth round, both had gotten significantly worse, sending the challenger back to his corner with blood pooling under his eyes and the small bump mutating into a colossal hematoma that threatened to bring the fight to a premature close. 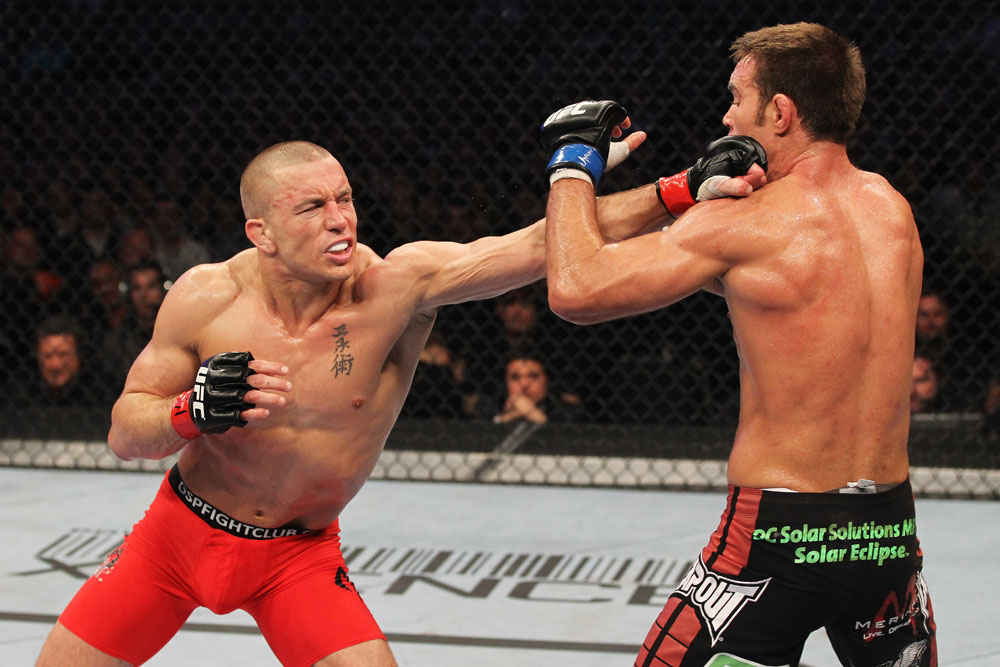 Down on the cards and clearly in need of a finish entering the final stanza, the veteran featherweight pressed forward, eating more heavy shots before taking Aldo to the canvas. Working out of top position, Hominick connected with a series of lefts, each of which drew a response from the crowd. As he postured up and rained down more blows, the cheers persisted, the largely pro-Canadian audience seemingly trying to will the local challenger to victory with the Team Tompkins representative responding to each and every roar.

Although he wasn’t able to find a finish and Aldo took home a unanimous decision victory, Hominick still came away from UFC 129 as one of the biggest winners of the night.

St-Pierre and Shields were tasked with following the Fight of the Night-winning featherweights into the cage to close the show, with the French-Canadian superstar getting a massive pop as he made the walk to the Octagon before posting another workmanlike win over the former Strikeforce champion in the night’s finale.

Now seven years removed from the event, UFC 129 still stands as a critical placeholder in the UFC’s history and that of several of the show’s participants.

Not only did it mark the end of Couture’s run as an active competitor, but it also served as the starting point of Benson Henderson’s climb to the top of the lightweight division and the beginning of Aldo’s lengthy, impressive reign over the 145-pound weight class.

While UFC 193 has since exceeded the attendance record established that night in Toronto and shows like UFC 205 at Madison Square Garden became much larger spectacles, this event remains an historic moment in time and one of the most memorable evenings of all time.