Aussie 205er Returns To The Octagon At UFC Fight Night: Lemos vs Andrade
By James Cooney, on Twitter at @JimCooney • Apr. 20, 2022

When Tyson Pedro injured his knee while fighting Mauricio “Shogun” Rua in December 2018, he had no idea how serious it was. Four years and three separate knee operations later, the light heavyweight from Down Under is finally set to compete in the UFC again, against American Ike Villanueva on April 23.

The road to recovery had many speed bumps and not only tested the 30-year-old Sydneysider’s physical limits, it challenged his mental strength, too. And right now, Pedro’s just glad the ordeal is nearly over.

“It’s been a real rollercoaster, man” he admits. “It’s been almost four years, so it’s really hard to put it all into words. There were dark times, but I knew I wanted to be back [in the UFC]. It’s just great to be within reaching distance.”

During his time on the shelf, Pedro has seen the sport of MMA boom in Australia and New Zealand, with the likes of Israel Adesanya, Robert Whittaker and Alexander Volkanovski becoming household names. Oh, and his brother-in-law, Tai Tuivasa, is pretty popular these days, as well. 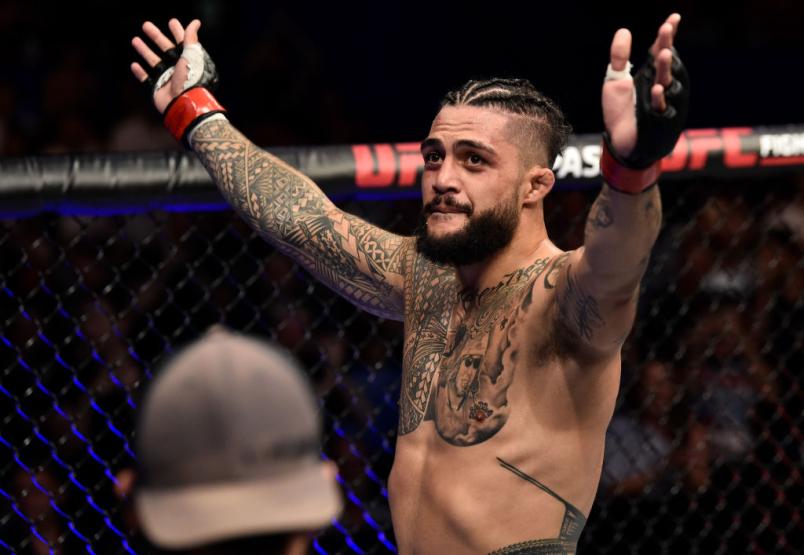 Tyson Pedro celebrates his submission victory over Saparbek Safarov of Russiain their light heavyweight bout during the UFC 221 event at Perth Arena on February 11, 2018 in Perth, Australia. (Photo by Jeff Bottari/Zuffa LLC)

“A lot of the fans today probably don’t even know who I am,” reflects Pedro. “But I love seeing how the sport has taken off. I love seeing Tai up there, Volk with the title and all of the New Zealand boys killing it. That pumps me up.”

Pedro and Tuivasa are very close, and over the past four years have started some businesses, including launching their own beer label and opening an Italian restaurant in Western Sydney. When asked who’s the bigger troublemaker when they’re out on the town, Pedro laughs.

“When Tai and I are together, it’s like a cyclone. But I’m having a rest with the partying. I had four years off, which was plenty of time for that sort of thing. All I want to do now is catch up – I want to fight, get paid and then jump straight back in there and fight again.”

Asked how he feels the 205-pound landscape has changed since 2018, Pedro says, “There are really only a few names that I recognize. One thing I have noticed, though, is that the level of BJJ has improved. Fighters are also starting to market themselves better.”

Speaking of improvements, the Aussie has been training with a host of top coaches for his latest fight camp, even though it’s meant travelling great distances.

“It’s been a long camp. I started it 14 weeks ago, in Dubai with Tai. But my fight got pushed back and his was brought forward. So then I returned to Australia and did two weeks in Wollongong at Freestyle Fighting Gym. Luckily, Eugene [Bareman], Carlos [Ulberg] and the boys from City Kickboxing were there at the time. After that, I finished up at the CMBT Training Centre on the Gold Coast.” 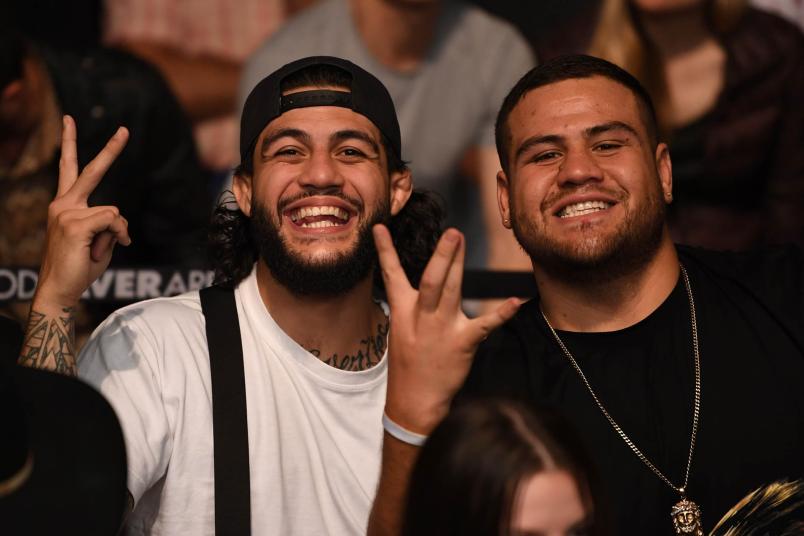 Tyson Pedro and Tai Tuivasa pose for a photo during the UFC 234 at Rod Laver Arena on February 10, 2019 in the Melbourne, Australia. (Photo by Jeff Bottari/Zuffa LLC)

Pedro’s father, John, has also been a part of this camp, not to mention playing a huge role in his chosen career path. Along with naming his son after boxer “Iron” Mike Tyson, John holds multiple black belts and was a pioneer of the sport of MMA in Australia. Tyson says he knew from the age of about 16 he wanted to follow in his dad’s footsteps, even if that wasn’t always easy.

“He was hard on me growing up, and when you’re young it’s difficult to understand why someone is doing that. In hindsight, I see it made me who I am. It’s why I didn’t quit during the last four years – that strength is ingrained in me. These days, we’re very close because of that bond. He flew over from New Zealand for this camp and it’s been awesome.”

Another family member who won’t be far from Tyson’s thoughts at UFC Fight Night: Lemos vs. Andrade is his cousin Brian, who was killed while serving in Afghanistan in 2010. Pedro pays tribute to him by wearing Brian’s military hat on the walk to the Octagon.

“I want to get those wins and live life for him,” he explains. “At one of my previous bouts, I grabbed the wrong bag and didn’t have his hat to wear on the walkout. That was one of the only times I’ve ever felt emotional in a fight.”

When asked his opinion on opponent Ike Villanueva, who has a ton of experience and serious knockout power, Pedro makes a surprising admission.

“I’ve only watched a bit of footage of him. I don’t watch my opponents much. I let the team do a breakdown and send it to me. But I hope he’s been training hard, because I’ve been busting my arse for this fight. People haven’t seen me in a long while and I’ve really put in some work. I’m looking forward to it.”