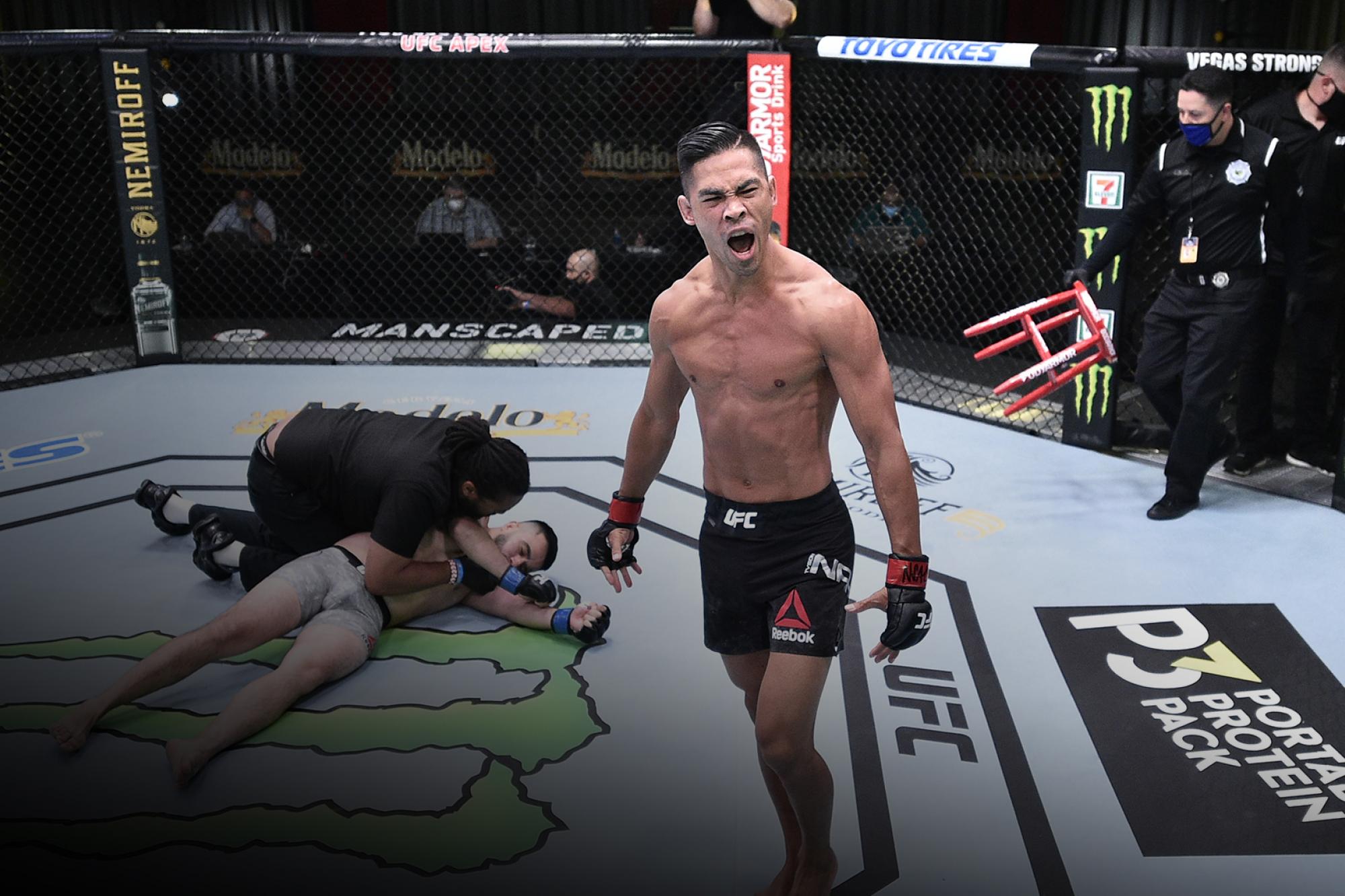 Tyson Nam Was Made For Battle

Tyson Nam believes his UFC Fight Night: Chiesa vs Magny bout is the perfect time to make a statement.
By Thomas Gerbasi, on Twitter: @TGerbasi • Jan. 19, 2021

There’s a post on Tyson Nam’s Instagram page that is unlike any other that the flyweight contender has posted.

In the Throwback Thursday post from October, Nam is seen sitting in the backseat of some sort of contraption, barefoot and flying high above Victoria Falls in Zambia. In the realm of daredevils, this little trip from 2015 takes things up several notches.

“I guess I really didn't care,” he said. “That contraption is literally a paraglider with a lawnmower engine attached to it.”

“It made absolutely zero sense,” Nam continues. “It was definitely high; a little step off and you'll definitely become a pancake. But the picture was exactly how high it looked, where you're how many hundreds or thousands of feet above land. It was one of those things where you want to stay in the craft.”

"It's been a long road and it's really tested my motivation to see if I wanted to be in this." - @TysonNam discusses his career and his upcoming #UFCFightIsland8 bout with Matt Schnell 🔊⬆️

But would he do it again if given the opportunity?

“I would. This is the weirdest thing: If I'm hiking alongside a cliff and the cliff is 50 feet away, my legs stop working from fear. But for some reason, a rollercoaster ride or some sort of sketchy flying device and I'm actually okay. It's not bad at all.”

Suffice to say that Nam is fearless. But say that to him and he’ll make a correction.

“I would say at least fifty percent of the time I'll go through life without fear,” he said. “It's almost excitement when I do something that's dangerous. It's just those handful of things that will really scare me to where my body literally shuts down, whether it's heights, centipedes, spiders.”

“But I'll fight any man alive.”

Well, there you go. When you’ve flown over a waterfall in a lawnmower engine-propelled machine, fighting for 15 minutes or less in the Octagon with rules and a referee involved can’t seem all that bad. Maybe it’s why the Hawaii native has done this professionally 32 times, with fight number 33 coming up on Wednesday against Matt Schnell. It’s a badge of honor to be able to fight in this sport alone. Making it to the UFC? That’s a big badge.

“Maybe one percent of athletes will step into a cage to actually get into a fist fight,” he said. “Probably 90 to 95 percent of people will go into an MMA gym one day, get punched in the face and never return. But you've got that one percent of people that actually stick around, do the actual training, get beaten up, come the next day and ask for more and they'll get in the cage and fight. One percent of that one percent gets to fight in the cage in the UFC. I'm no mathematician, but that's a really small percentage of fighters that get to do that. So I'm very lucky, very grateful that I stuck it out to where I'm at right now.” 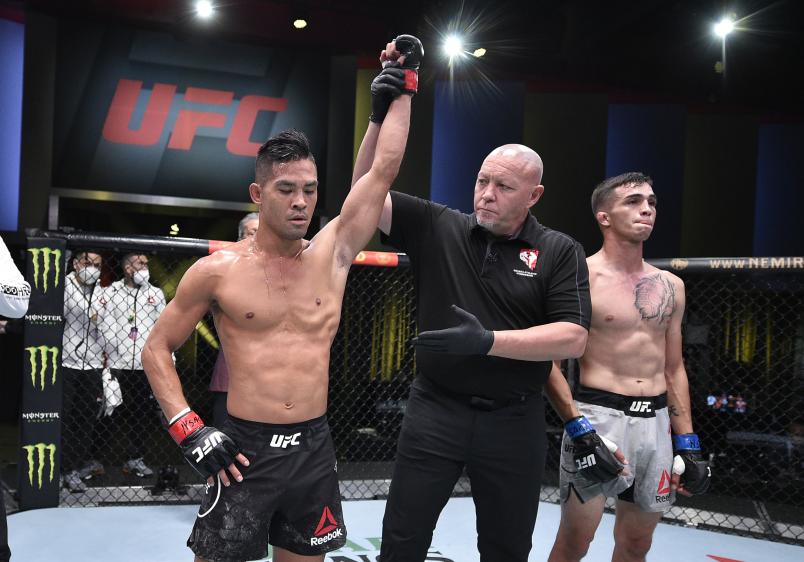 Tyson Nam reacts after his knockout victory over Jerome Rivera in their bantamweight bout during the UFC Fight Night event at UFC APEX on September 19, 2020 in Las Vegas, Nevada. (Photo by Chris Unger/Zuffa LLC)

It wasn’t an easy road, with contract issues and key losses keeping him out of the UFC until he finally got his shot in 2019. Then he lost his first two Octagon bouts to Sergio Pettis and Kai Kara-France, but he stayed the course and in his most recent appearances, he scored knockouts of Zarrukh Adashev and Jerome Rivera that earned him a spot in the flyweight top 15. That’s a full 180 for the 37-year-old, who does know that he can’t do this forever. But for the moment, he’s embracing every second of it, knowing that one day when he won’t be fighting, at least he’ll have a host of memories of a life fully lived.

“I think about that every single day,” he said. “I went where to do what against whom? (Laughs) I must be a little bit crazy. But it's definitely something where I'm keeping track, and after this career is said and over, at least I still have video clips, memorabilia to say, 'Oh yeah, I used to do that thing called MMA.'”

But then what? The adrenaline junkie in him won’t likely be satisfied by long walks on the beach in Waipahu.

“I might have to pick up a new hobby, like surfing,” he said. “Something active that will keep my blood circulating throughout this body that's somewhat healthy and somewhat exciting because many years ago, I tried surfing, I loved it and the feeling that a surfer says they get when they're on top of a wave, there's no other feeling like it. You're almost in a trance and almost floating on clouds when you're riding a wave. It's nothing I can actually describe; you gotta experience it for yourself. So maybe something of that sort.”

But that’s a while away for Nam, who has nothing on his mind but fighting at the moment.

“I'm all-in on this MMA thing,” he said. “I can't even think about anything other than MMA. The only thing I know I'm doing is MMA.”

“I have done that in the past, and it's definitely not my cup of tea,” he laughs. “I was made to do something that's a little more exciting, dangerous, and I feel like that's what I was put on this Earth to do.”

Clearly, Nam, like his peers in the fight game, was cut from a different cloth than most. He knows that in this day and age, young people don’t come up the way he did. That’s not necessarily a good thing.

He tells the story of how a rowdy kid got straightened out by his brother.

“I was a temper tantrum baby, and in public - it could be in the middle of a restaurant, the middle of a store - I would throw myself down and start yelling and screaming and crying. One time when I did it, I must have been around three or four and I’m with my older brother, who's like 11 years older than me. And my mom tells my brother, 'Hey, can you go handle that?' So he picks me up, slaps me, and tells me, 'Now you have something to cry about.' (Laughs) And I don't remember this because I was so young, but after that, my parents said I never did it again.” 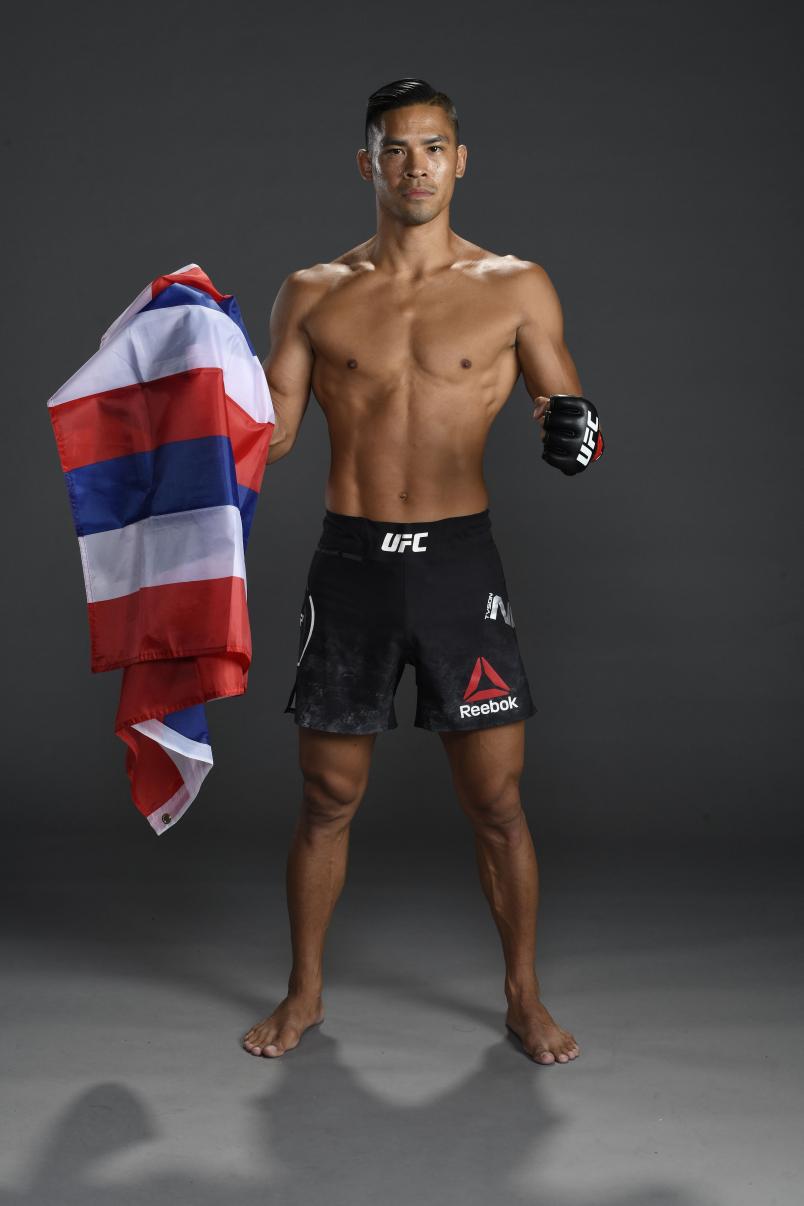 “It seems like today, everybody is a lot softer, physically, mentally, socially.”

Not Tyson Nam. He’s at least 50 percent fearless, though I would give him the whole one hundred percent. Oh yeah, he’s getting into another fistfight on Wednesday. And hopefully a few more before 2022 arrives. So what does this year look like, Mr. Nam?

“2021 is gonna be a continuation of what I started in 2020 and that's just to keep going up, up, up that ladder in the UFC flyweight division,” he said. “2020 was the best year of my MMA career. When life gives you lemons, you make lemonade and that's exactly what I did. And I plan on making a big gallon of lemonade in 2021.”