In Tyson Nam's second UFC bout, he has it set in his mind that he needs to start "starching" his opponents.
By Thomas Gerbasi, on Twitter @tgerbasi • Feb. 19, 2020

It says something about Tyson Nam’s body of work that the UFC put him in with top five contender Sergio Pettis in his UFC debut last September before matching him with No. 8-ranked Kai Kara-France this weekend in Auckland.

That something is likely that the promotion respects what the 36-year-old has done on the regional scene and is matching him accordingly in the big show.

“The way that I look at it, I’m a little later on in my age,” said the 14-year-pro. “My body works good, but at the same time, the flyweight division, you’re either making a dent or they’re kicking you out and finding new talent. They gave me number five, they’re giving me number eight; I need to crack a dent in this or I might catch my pink slip, so I’m fighting for my job, fighting for a place in this flyweight division.”

Whether accurate or not, that’s all the motivation Nam needs. But where is all that Hawaiian positivity?

“There’s no positivity right now,” said the Honolulu native. “I’m pissed off. I need to knock somebody out.” 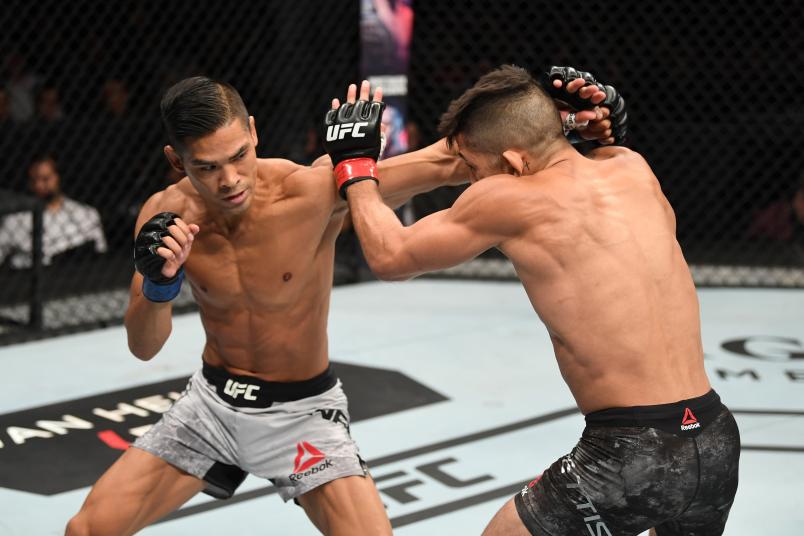 It comes out intimidating, but Nam can’t keep a straight face for long. In that way, he’s like all his peers on the Hawaiian fight scene: as laid-back and nice as can be outside the Octagon, but when the gloves are on, it’s on.

“You know, I would like to say that the weather is great,” said Nam of life at home. “You can literally go outside, have a barbecue and have some beers and you’re chilling most of the day. But you have a couple of beers and all of a sudden you get a little feisty and you want to test your skills. (Laughs) You’re at the beach, you make a circle, and it’s called Fight Club by that time of the night.”

That type of upbringing will make you fight a certain way despite the presence of a referee, judges, and rules. Nam has made a successful career out of it, winning 18 of his 29 pro fights. But when a fight becomes a sporting event, it can sting fighters like him. And that was the case when Nam fought Pettis in Mexico City. So there will be no complaints about the altitude, the first-time UFC jitters or anything else other than what happened between him and his opponent during their 15 minutes of fighting.

“I’ll tell you one thing, I didn’t have no jitters,” said Nam of his first trip to the Octagon. “And both Sergio and I were at altitude, so it’s not like anyone had an advantage with that; we were both sucking wind after that first round because that air was so damn thick. After the fight, it took me like an hour to get my heart rate back down. It was like nothing that I’d ever experienced. But I got outpointed by a point fighter, that’s all it came down to. I didn’t get hurt, rocked or anything like that. When I fight, I don’t punch for points; I only punch to take your head off. But it is a sport and if it comes down to a decision, it comes down to points and I got outpointed.”

Nam accepts the loss for what it is and he’s moved on. As Cus D’Amato once said, “People who are born round don’t die square,” and that’s where Nam is heading into his second UFC bout. He is who he is. It’s in his blood.

“There are so many different types of upbringings that fighters go through, whether it’s trying to win a match by points or the way that I grew up,” he said. “I grew up with a bunch of boys and there were street fights every other day and that’s just the way that I grew up. I never did any Tae Kwon Do or Karate where it was a point sparring type of match. We were in the street, where you had to knock somebody out to stop a fight.”

He laughs, knowing how foreign this may sound to some folks. But it was part of life for him.

“I got picked on when I was small,” he said. “I was the youngest and the smallest of my brothers and cousins and I had to swing hard on these guys.”

In other words, Nam is bringing it Hawaiian-style.

“I just need to show the UFC and show everybody else why I should have been here a long, long time ago,” he said. “I need to start starching these fools. And I’m gonna start it off right in New Zealand. I’m bringing the heat.”