Tyson Nam Doesn't Mind Having The Odds Stacked Against Him

Tyson Nam may be facing two straight UFC defeats, but he feels he's still hitting his prime ahead of Saturday's event in Las Vegas
By Thomas Gerbasi, on Twitter: @TGerbasi • Jun. 10, 2020

At just 83-78, the St. Louis Cardinals had the worst record of any team to win the World Series when they defeated the Detroit Tigers in 2006. They didn’t care about the odds.

And who will forget the 10-6 New York Giants handing the mighty New England Patriots their first and only loss of the 2007 season in Super Bowl XLII when everyone counted them out?

So, when Tyson Nam dropped the first two fights of his UFC career, he shook it off and moved on. Frankly, this is what he does, and it will take more than a couple setbacks to chase him away from his ultimate goal.

“Fighting was always in my nature,” said Nam. “This was what I was made to do.”

He will do it again this Saturday in Las Vegas when he faces Zarrukh Adashev at the UFC Apex. The newcomer from Uzbekistan is replacing Ryan Benoit on short notice, making it a presumed scramble for Nam and his team to adjust their game plan, but as a pro since 2006 with 30 fights under his belt, don’t expect the Hawaiian to get thrown off by the switch. At this point, he just wants to fight.

And erase the memory of his decision defeats to Sergio Pettis and Kai Kara-France by winning.

“I guess when you're coming off a pair of losses and you're getting asked these questions about your losses over and over, it brings about those bad feelings that you felt right after the fight, which is never the best feeling,” he admits. “It's literally the lowest of lows. But for myself, I felt like I won my last fight (against Kara-France), so, in my head, I won it and it was due to the judges, so I feel like I'm coming off a win. On the record it says two losses in a row, but I'm not coming down with the lowest of lows emotionally like most people would. I still feel good and I still feel confident coming into my next fight.” 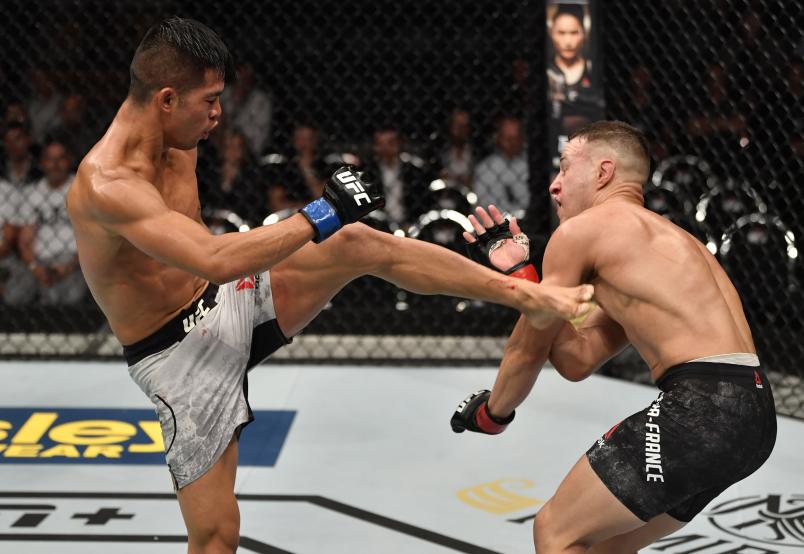 It’s the voice of experience talking, and while he hasn’t left the Octagon with his hand raised yet, his attitude and his willingness to scrap on fight night has left a positive impression, not just with the fans, but obviously with the UFC.

“With the fans, you always have a few that send you some unwanted messages (Laughs), but for the most part, it was positive,” Nam said of the reaction he’s received after his first two trips to the Octagon. “Even more than a win or a loss, I always want to make sure that I've brought some excitement to the fans, the crowd and the people watching. I always want to be entertaining and I feel like I've done that. Plus, coming off two losses and they (the UFC) are giving me a third fight, I think someone likes me over there. (Laughs) Most people coming off of two losses would have meant their pink slip, so someone's looking over me.”

Or maybe they see the Honolulu native’s body of work, his aggressive style and the reality that his first two UFC bouts came against top 15 contenders. Then again, it could come down to Nam’s theory that at 36 years old, he’s about to hit his stride.

“Some people get the call one year, two years into their career,” he said. “I got mine 13, 14 years into my career. (Laughs) Everything happens for a reason but, you know what, when I did move back to Hawaii from Portland and started fighting in Russia, preparing for Ali Bagautinov (in 2017) I was 33 and I really felt a change in my body for the positive. I felt stronger and I finally hit my man-strength. I was actually getting better in my early to mid-30s than I was when I was in my mid-20s. So I felt it was a positive coming in to the UFC this late in my game. My body's not weathered, I don't feel like I'm 36, I sure as hell hope that I don't look like I'm 36. I feel like I'm hitting my prime now.”