“My goal right now is to climb to the top of the featherweight division
and get that belt. I’m more hungry now as a fighter, and
more focused on fighting now than I’ve ever been." - Tyson Griffin 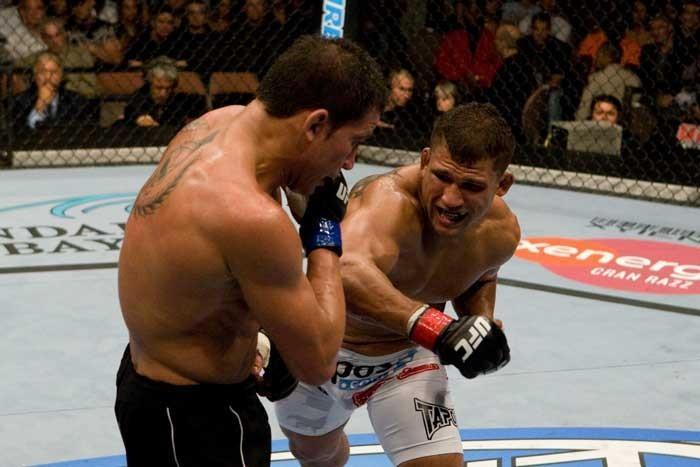 Tyson Griffin was about to breathe a sigh of relief, but he held it, knowing how the fight game is. He had just finished a three round bout with Nik Lentz at UFC 123 last November, and it appeared that his two fight losing streak was about to become a thing of the past.

But the judges disagreed, awarding Lentz a split decision victory in one of the more controversial verdicts of 2010. Griffin, well aware of the perils of leaving his fate in the hands of outside arbiters, was still stunned.

“That night it was heartbreaking,” he said. “You leave it all out there, you fight hard, you think you win, and then the rug gets pulled out from underneath you and you land on your butt and wonder ‘what happened, what did I do wrong?’ You try and look at everything but you really can’t blame yourself and you can’t even really blame the judges I guess. So you just gotta move on, pick everything up and move forward.”

It’s a classy move, taking the high road after an experience like that, and it’s a wise one as well, because sitting on a decision like that can only drive you crazy after a while. But losses like the one to Lentz will always hurt more, and it’s not just because you know that it was only a razor-thin margin that kept you from getting your hand raised, but because it now affects more than your win-loss record.

“I rewatched the fight maybe once,” he continues, “and I definitely think I won. I could see how you could give Lentz a round, but I definitely felt the first and third were my rounds.”

Yet like he said, it was time to move on and put a forgettable 2010 to the side forever. It was a year in which Griffin went from being a prime time player in the title picture at 155 pounds to getting hit with a three fight losing streak that put his future in jeopardy. But he doesn’t look at 2010 as 0-3 and nothing else. He sees it as the year in which he graduated from the school of fistic hard knocks.

“Personally and fight wise, it was a maturing year,” he said. “I had a lot of time to think in that time and this year too with my knee surgery and all that, but over the last couple of years I’ve been learning about myself and I’ve grown as a person and realized what I want out of this sport. It’s almost like I was in fight college for a few years and now I’ve got my degree and I know what I want to do and I know what direction I want to take my career in.”

And his aim is clear – to win a world title. Only now, his sights are set not on former opponent Frankie Edgar, but featherweight boss Jose Aldo, as he makes his move 10 pounds south, beginning with a Sunday bout in Pittsburgh against Manny Gamburyan.

“My goal right now is to climb to the top of the featherweight division and get that belt,” said Griffin. “I’m more hungry now as a fighter, and more focused on fighting now than I’ve ever been. I’ve always enjoyed fighting and it was fun and it paid the bills, but now it’s more about personal goals and reaching my peak as an athlete and being the best fighter I can be.”

It’s not the first time Griffin has been here, as he began his career at featherweight, most notably beating future WEC champion Urijah Faber in 2005. But a lot has gone on since then, both good and bad, leaving questions as to why Griffin would make the move now, after three losses. But as he explains, it was a move that was planned before the Lentz fight.

“I had my manager talk to (UFC matchmaker) Joe Silva before that fight,” said Griffin. “It would have been nice to move down with a win so it didn’t look like I was running from the weight class, but it was just a natural progression over the years. I learned more about diet and nutrition and I actually cut down to around ‘52 for a few fights there and just got smaller naturally by eating right and eating better. So once the UFC brought that (featherweight division) over, it seemed like a natural move for me. And everyone always says it’s my first fight at ’45, but I fought Urijah at ‘45 back in the day, so I’ve been there before and I just know more now, and it should work out a lot easier.”

Easy? Not usually the word you associate with a drop in weight class, but Griffin is remarkably cool and pleasant in the time before his first UFC bout at 145 pounds.

“It (the weight cut) hasn’t affected my quality of life at all,” he said. “I’ve been eating good, eating healthy, and when you eat healthy and have a lot of fruits and vegetables, you can actually eat more volume. I don’t know how everybody else does it, but I don’t calorie count; I can’t do that, my brain just doesn’t work that way (Laughs), and my body doesn’t either. So if I’m hungry I’m gonna eat something good and healthy and keep my body full of energy. Mainly, I’ve just upped my training and I’ve been working out a lot harder and a lot more.”

And when it comes to dealing with the specter of a three fight losing streak over his head going into the Gamburyan fight, he’s not letting that dictate the way he trains and feels in the days leading up to the bout.

“It’s a fresh start,” he said. “I’m not really worried about winning or losing, and that’s something that comes from competing over the years. I hate losing, of course, but I’m not focusing on not losing; I’m focusing on doing what I’ve been working on, fighting hard and having a good fight. With all that going down good, I should win and it shouldn’t be an issue.”

The fans haven’t left his side either, making it clear that all those Fight of the Night awards he won over the years haven’t been forgotten. But as the 27-year old explains, there were times when he forgot what it took to get to that point when he was picking up bonus checks for fights against Edgar, Clay Guida, Thiago Tavares, Sean Sherk, and Rafael dos Anjos.

“I think through all those Fight of the Nights and having my bills paid, I kinda took for granted the situation I was in and kinda got a little lazy,” he said. “I wasn’t always in the gym and learning and progressing with the sport and being the best fighter I could be. I think I started just training for my fights when I had a fight two months away and it got me in a little bit of a slump. I wasn’t really having too much fun with fighting. Now I’m having fun again and I’ve rededicated myself to the sport.”

A key motivator is getting a test and a title shot against Aldo.

“Seeing Aldo fight and his style, that was the one thing that kinda motivated me,” he said. “I always liked the standup game and had fun with it, and that’s a challenge that would be fun for me. I think I can beat Aldo standing, but at the same time, I’m getting back to my roots in training and training everywhere all the time instead of just doing what I like to do.”

But before he can think of Aldo, he has to deal with “The Anvil,” and he doesn’t have an easy out in front of him in Gamburyan, who has won three of four fights since jumping to featherweight himself. But that’s just what Griffin wants. And expects.

“He’s a tough guy,” said Griffin of the Ultimate Fighter season five finalist and former WEC title challenger. “He’s got knockout power, he swings hard and fights hard, he’s always in good shape and that’s what I want. I don’t want any easy fights, I never really had any, and it’s awesome to get someone who fought for the title, a contender, in my first fight at 145, and I’m looking to make a statement when I fight Manny. I want to dominate him and beat him convincingly.”