On Saturday, September 8, Tyron Woodley defends his UFC welterweight for the fourth time against unbeaten British contender Darren Till. The UFC 228 main event is another big challenge for Missouri’s “Chosen One,” but as you will find out below, taking on big challenges has never been an issue for him.

2011
Tarec Saffiedine (Watch on UFC FIGHT PASS)
https://www.ufc.tv/video/tyron-woodley-vs-tarec-saffiedine-strikeforce-challengers-13-woodley-vs-saffiedine
An accomplished amateur wrestler, Woodley made a smooth transition to MMA, and by his third pro fight, he was in Strikeforce, basically throwing him into the deep end of the pool in his first rookie year. Not surprisingly, Woodley adjusted well, and by the end of 2009 he was headlining the Strikeforce Challengers show. It was in 2011 that he moved from prospect to contender though, as he defeated future Strikeforce welterweight champion Tarec Saffiedine in his eighth pro bout. Showing that his wrestling was going to be a problem for anyone he faced, Woodley was calm, cool and collected and he pounded out the unanimous decision victory. 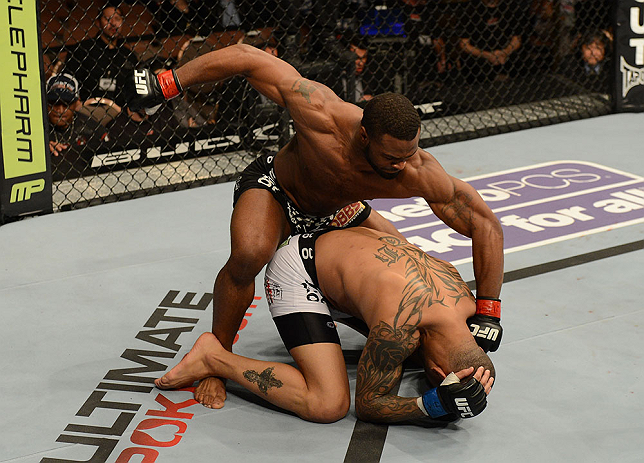 After the win over Saffiedine, there would be no turning back for Woodley, and his subsequent wins over Paul Daley and Jordan Mein put him in a Strikeforce title fight against Nate Marquardt. That night in 2012 belonged to “Nate the Great,” though, as the veteran handed Woodley his first pro loss. Seven months later, Woodley was in the UFC, and while some had labeled him strictly a wrestler, in his Octagon debut, he showed off his hands with a devastating 36-second knockout of Jay Hieron. Welcome to the UFC, Mr. Woodley.

2014
Carlos Condit (Watch on UFC FIGHT PASS)
https://www.ufc.tv/video/tyron-woodley-vs-carlos-condit-ufc-171
I’ve covered fights for over two decades. I can’t recall hearing (yes, hearing) a harder shot than the right hand Woodley landed on Carlos Condit at UFC 171 in March 2014. How Condit remained conscious after that one will always be a mystery, and while the final result will go down as a TKO victory for Woodley due to a Condit knee injury, it was clear up until the finish in the second round that “The Chosen One” was on his way to an impressive victory. It was just one of those nights where everything was clicking. And it was a pivotal win for Woodley, who now had the title in his sights. 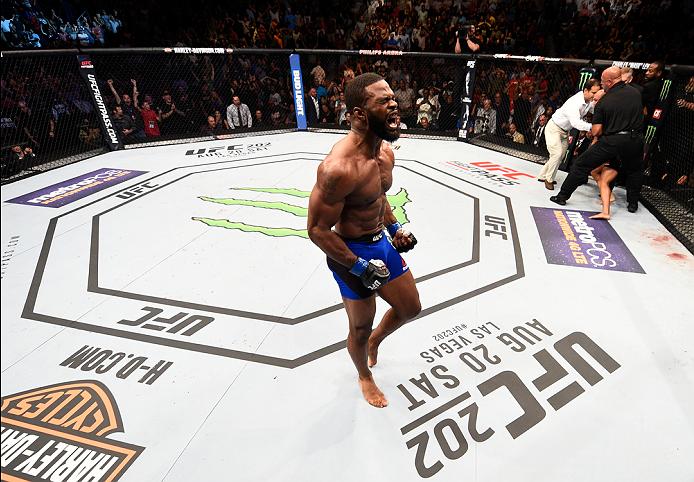 Back-to-back wins over Dong Hyun Kim and Kelvin Gastelum earned Woodley a shot at his friend Robbie Lawler’s UFC welterweight title in July 2016, and while this opportunity was bittersweet because he was a training partner of Lawler previously, both agreed that business was business. And on that night in Atlanta, Woodley took care of business, stunning the MMA world by knocking Lawler out in a little over two minutes. Meet the new boss of the 170-pound weight class.

2016
Stephen Thompson (Watch on UFC FIGHT PASS)
https://www.ufc.tv/video/tyron-woodley-vs-stephen-thompson-ufc-205
The thing about being a UFC champ is that there is no time to rest, no time for title defenses against lower-ranked contenders. So less than four months after winning the crown, Woodley was back in the Octagon defending it against Stephen Thompson. And on a card stacked with stars for the UFC’s first event at Madison Square Garden in New York City, it was Woodley and Thompson stealing the show with a thrilling five-round battle that resulted in a draw and Fight of the Night honors.