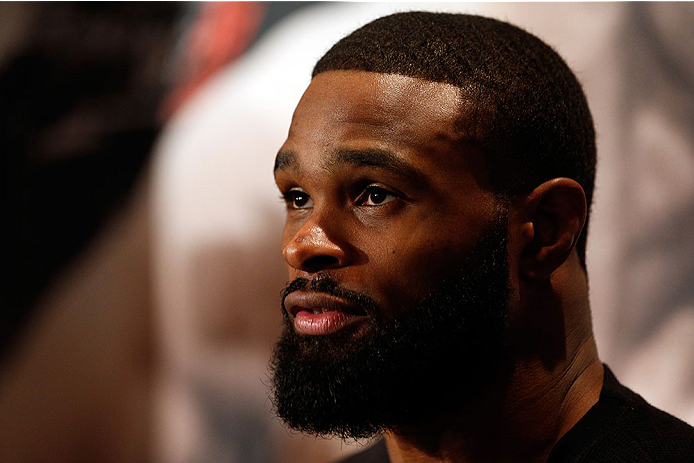 When it comes to Black History Month, Tyron Woodley’s wakeup call happened long before he strapped on four-ounce gloves and sailed to the top of the UFC’s welterweight division. Back when he was a student at the University of Missouri, he assumed that taking a Black History class was a guarantee for a good grade.

“I was like ‘I’ll get an A in that; I’m black,’” he laughs. “Then I took that class and it was the most embarrassing time. I got a C in the class, number one, and it was so difficult. It was a shame that Caucasian-Americans and Indian-Americans and people from Iran knew more about African-American history. They took the class more seriously, and they studied, and they aced the class. So just because you’re African-American doesn’t mean you know black history. I think if you are African-American, not only should you have a more vested interest in finding out about your own history, but you should also share that history with the entire world.”

February is Black History Month, and as we fast forward from Woodley’s college days, the 170-pound contender is putting out the word on social media and looking for his fellow athletes and anyone else who wants to get on board to take in that rich past and realize that history isn’t about and endless boring dates, names and places, but that it tells a compelling story that anyone, regardless of race, can learn from.

“It’s important to me because I think that sometimes, and not only for Black History Month but anything that matters, we have a platform and the ability to use this platform to reach millions or people at once, but we never seem to use it for the right reasons,” Woodley said. “It might be about a reality show or something that happened last weekend, but none of these things are things of substance or things that can educate, motivate, and inspire people. And I think that part of the duty that we have as professional athletes, especially in the UFC right now, is to use this platform to reach people, to give them hope, and tell them the history.”

Woodley, 32, is breaking the mold of the modern athlete in a lot of ways. During the recent unrest in his hometown of Ferguson after the death of Michael Brown at the hands of police officer Darren Wilson, he was a powerful voice in the midst of chaos, choosing to approach the situation with a measured stance that cut through the noise the tragic situation produced from those without his unique point of view.

“I was very vocal,” he said, “but I don’t believe in just yelling and screaming out ignorance. I believe in being educated when you speak, and I also believe in looking at both sides and addressing some hard issues. I think they shouldn’t be swept under the rug. They should be addressed, some uncomfortable conversations should happen, and that’s the only way that you prevent things from happening in the future. I believe in using your celebrity to address social issues.”

It’s rare to see that these days, though there is hope that Woodley can spark the same type of attention to such issues as athletes of the 60s such as Muhammad Ali, Jim Brown, Bill Russell and Kareem Abdul-Jabbar did in their day. Too often, pro athletes – with Michael Jordan and Tiger Woods being the most publicized examples – are more concerned with endorsement deals and staying away from controversial stands on social issues than those who came decades before them. Some would say that an athlete, musician or actor shouldn’t even be involved in such discourse, but given their status as role models to young people around the globe, their influence can often be far greater than that of parents, educators or political figures. So why not take a stand and make that stand known? Woodley knows the importance of being a concerned citizen.

Yet Woodley has more selfish reasons for being a socially aware adult and one interested not just in what happens today, but for what came before him: his three sons. And as he recovers from a broken foot suffered in his most recent win over Kelvin Gastelum in January and has some time away from the fighting grind, he’s been able to make sure they’re following their father down a similar path as the one he’s paving.

“I’ve had an opportunity to sit back and reflect, to appreciate life and nature with my family, and do things that I would never get to do normally because we might fight four or five times a year,” he said. “So for me, I got to reflect on a lot of things, and I started reading so many inspirational books and watching these inspirational movies, and I needed to start talking to my boys now about this. I started reading pages to them out of these books and explaining it to them, and they understand it.”

He wants his peers to do the same thing, and it appears his challenge is working.

“I’ve been getting a great reaction, and I actually want people to feel like I’m calling them out, because I am,” he said. “But I’m not just calling them out; I’m challenging myself and I challenge you to join me.”