Tyron Woodley: Unleashing The Chosen One

"They’re giving me another chance to showcase that on the best, most important card of the year, and my plan is to go in there and steal the show." - Tyron Woodley 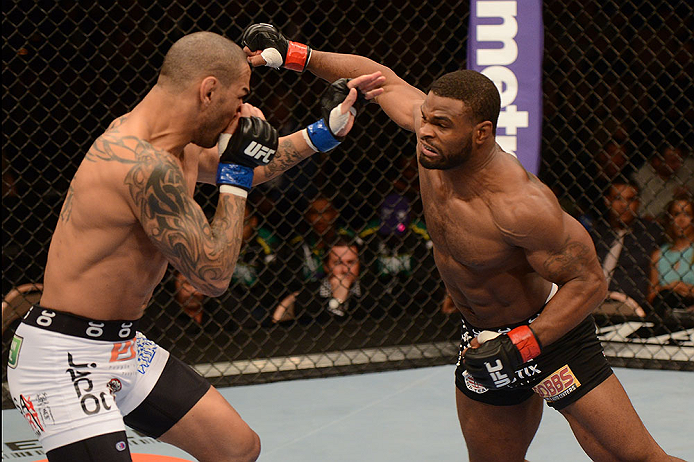 Tyron Woodley has spent the last two years poised to break into the upper echelon of the welterweight division, but it has yet to happen.

After enduring an uncertain time in Strikeforce following Nick Diaz’ departure that produced victories over Paul Daley and Jordan Mein, Woodley was tabbed to face Nate Marquardt for the vacant welterweight title.

As one of the most tenured fighters on the company’s roster, it was a bout that was a long time coming, and could have been the moment that propelled Woodley to the next level, both within the organization and in the sport as a whole. Ultimately, it wasn’t meant to be, as Marquardt earned a fourth-round technical knockout victory, handing the American Top Team representative his first professional loss.

Despite the setback, Woodley’s stock skyrocketed following his short-notice UFC debut when he blistered Jay Hieron at UFC 156. In just 36 seconds, he showed the tantalizing skills that he teased for so long, and once again looked poised to breakthrough.

Nine months after his impressive initial appearance in the Octagon, the question is no longer when Woodley will work his way into the Top 10 in the welterweight ranks, but if it will ever happen.

In June, his sophomore effort in the UFC against Jake Shields swallowed up all the positive momentum he accrued with his win over Hieron, and left him further behind than when he crossed over from Strikeforce. Over the course of 15 minutes in the cage at UFC 161, Woodley landed just 60 strikes, spending large portions of the contest fending off takedown attempts along the cage. The verdict from the judges came back in favor of Shields, and the former University of Missouri wrestler was left trying to figure out what went wrong and where he goes from here.

“I just try to act like the Jake Shields fight never happened,” he says with a laugh, the frustration from his last fight still lingering as he prepares to return to the cage. “As a pure scoring aspect, I still feel – Dana White feels, and most of the world feels – that he didn’t win the fight.

“Needless to say, I still have to fight a better fight. I believe I possess the skills and have been 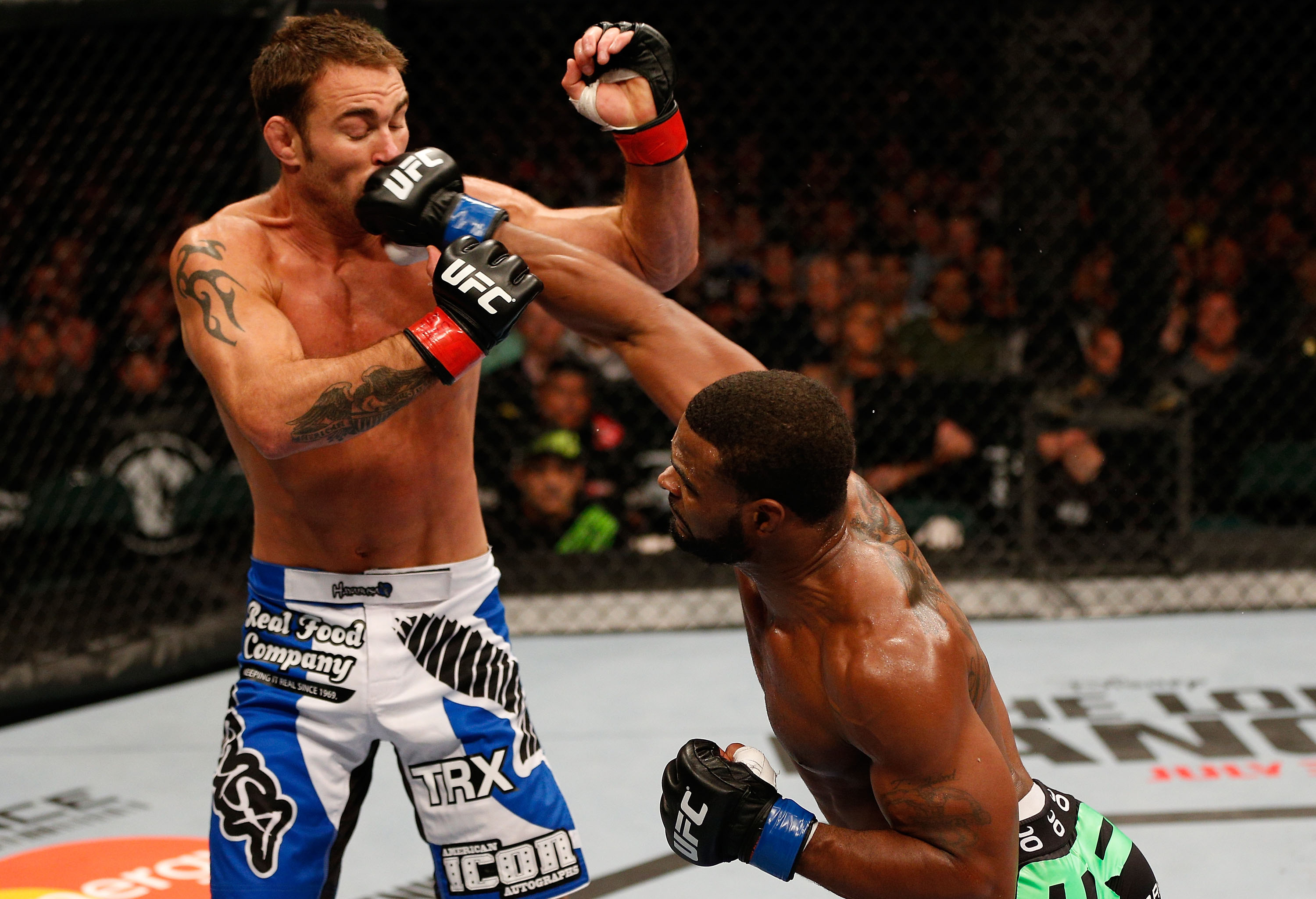 blessed with the abilities that I should have been able to finish him or I should have made it a really lopsided fight where we never ended up in that predicament anyway.”

Many agree with his self-assessment, but that has never been the issue. The talent has always been there, but the execution and application of his abundant skills is what has been hit or miss. It’s a reality Woodley is painfully aware of and working to rectify.

“What I need to remain focused on in training is pushing myself to move forward – being conscious of my movement, and being conscious of remaining active, regardless of what the other person is doing,” admits the now 11-2 welterweight, who returns to the Octagon Saturday at UFC 167 in a pivotal bout against veteran contender Josh Koscheck.

“That’s what world champions do. That’s how you beat the best guys, and Koscheck will force that out of me. I’m ready for it, and fighters in the future that don’t, I still have to find a way to do that.

“I’ve got chains on my arms for some reason,” continues the devotedly religious Woodley. “I say a quick prayer every day for God to release me. Why train this hard if I’m not going to go out there and execute? So I’ve really just been praying that the chains be released from my arms, and I go out there and just react – not think – and just go out there and compete the way that I know I can compete. > Watch: Woodley visits St. Louis Rams

Believing you should be further ahead in your career is not reserved to mixed martial artists – athletes in every sport wrestle with their placement on their team and it’s equally as prevalent in non-sporting pursuits as well.

What differentiates Woodley from most, however, is that the talented fighter is in a constant quest to find what he can do change his current situation. Rather than fixating on his questionable loss to Shields and what it cost him, he’s searching for ways to ensure it doesn’t happen again, and to make the most of the skills he’s developed over his nearly four-year career and during his time in the wrestling room at Missouri before that. 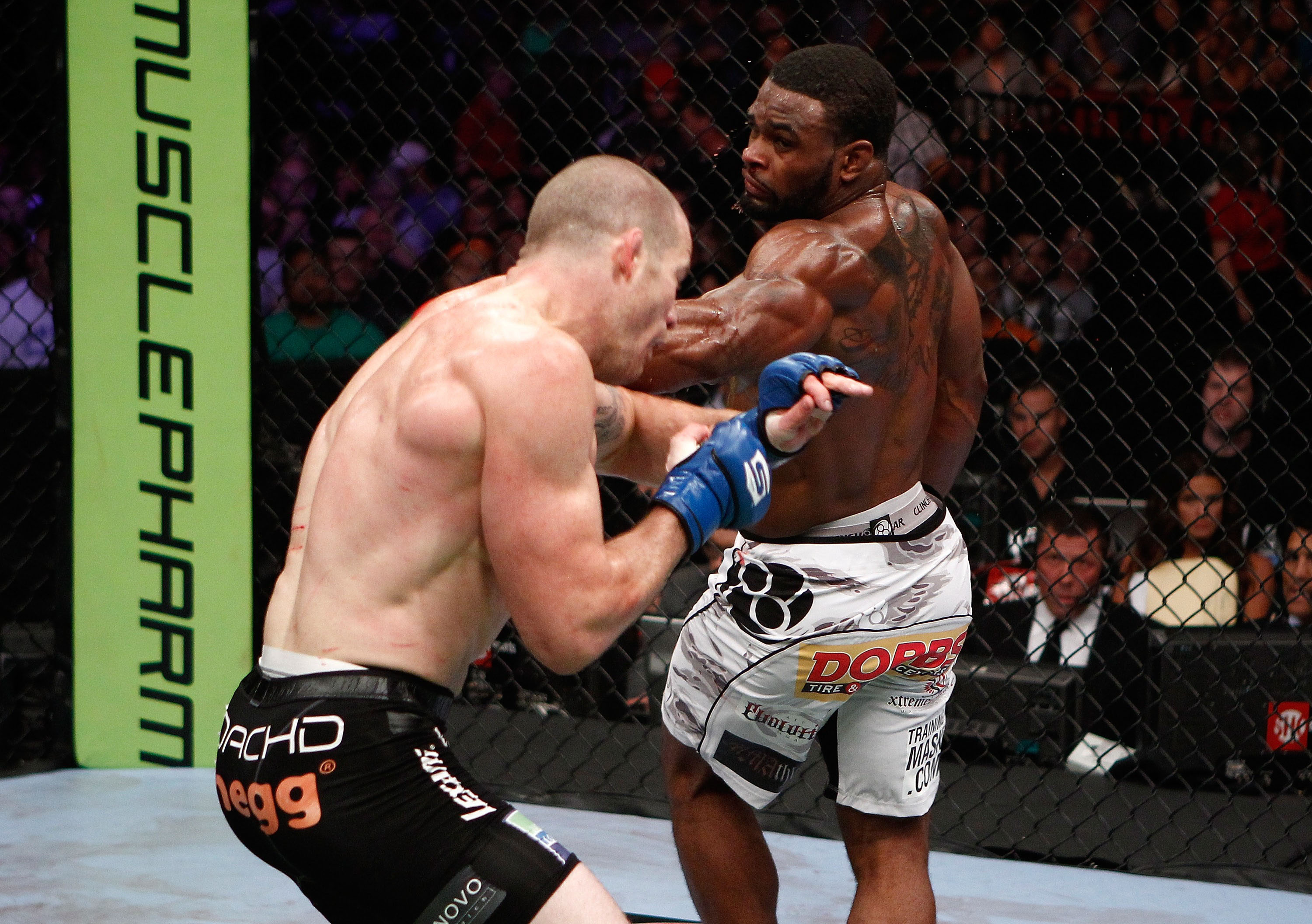 Over these last five months, the one-time prospect who is still striving to fulfill his promise believes he’s found the answer.

“When I first started fighting – for my first six fights– I just did not give a hell,” begins Woodley, who started his career with six finishes in his initial seven fights. “I didn’t know how to. I didn’t know to be scared. I was a very green, rugged fighter and I was trying to tear people’s butts up, and I need to get back to that.

“When I wrestled at the University of Missouri, my redshirt year I was 47-7 and I beat two of the three guys that were ranked in the Top 10 in the country in my weight class. What I realize is that nobody told me there were ranked or anything – I thought they were backups, so I didn’t give them any respect. I just went out there, pinned them, and beat them.

“I miss that me,” he says earnestly. “My first couple years in college, everybody was getting it, but my junior and senior year, my wrestling style became a little more conservative, and I see that same curve coming (in my MMA career), and I need to make sure it ends, and make sure that I use the rawness that got me here.”

The Time Is Now

That opportunity comes on Saturday at UFC 167 – an event headlined by welterweight champion Georges St-Pierre defending his title against Johny Hendricks, and featuring the division’s “heir apparent,” Rory MacDonald in a potential barnburner with the resurgent Robbie Lawler.

Following a performance like the one he delivered at UFC 161 against Shields, it would be wholly understandable if the UFC slotted Woodley on the preliminary portion of the card, opting to showcase lightweights Donald Cerrone and Evan Dunham instead.

But that’s not the direction the company has gone, and Woodley sees Saturday’s contest as a chance to show his full skill set in the Octagon for the first time and stand out on a card that is poised to be one of the biggest of the year.

“They see something in me – they see the star power, the ability, and they’re giving me another chance to showcase that on the best, most important card of the year, and my plan is to go in there and steal the show. > Watch: Training with Woodley

“Everybody’s eyes are on Johny Hendricks and (Georges St-Pierre), and the second set of eyes are 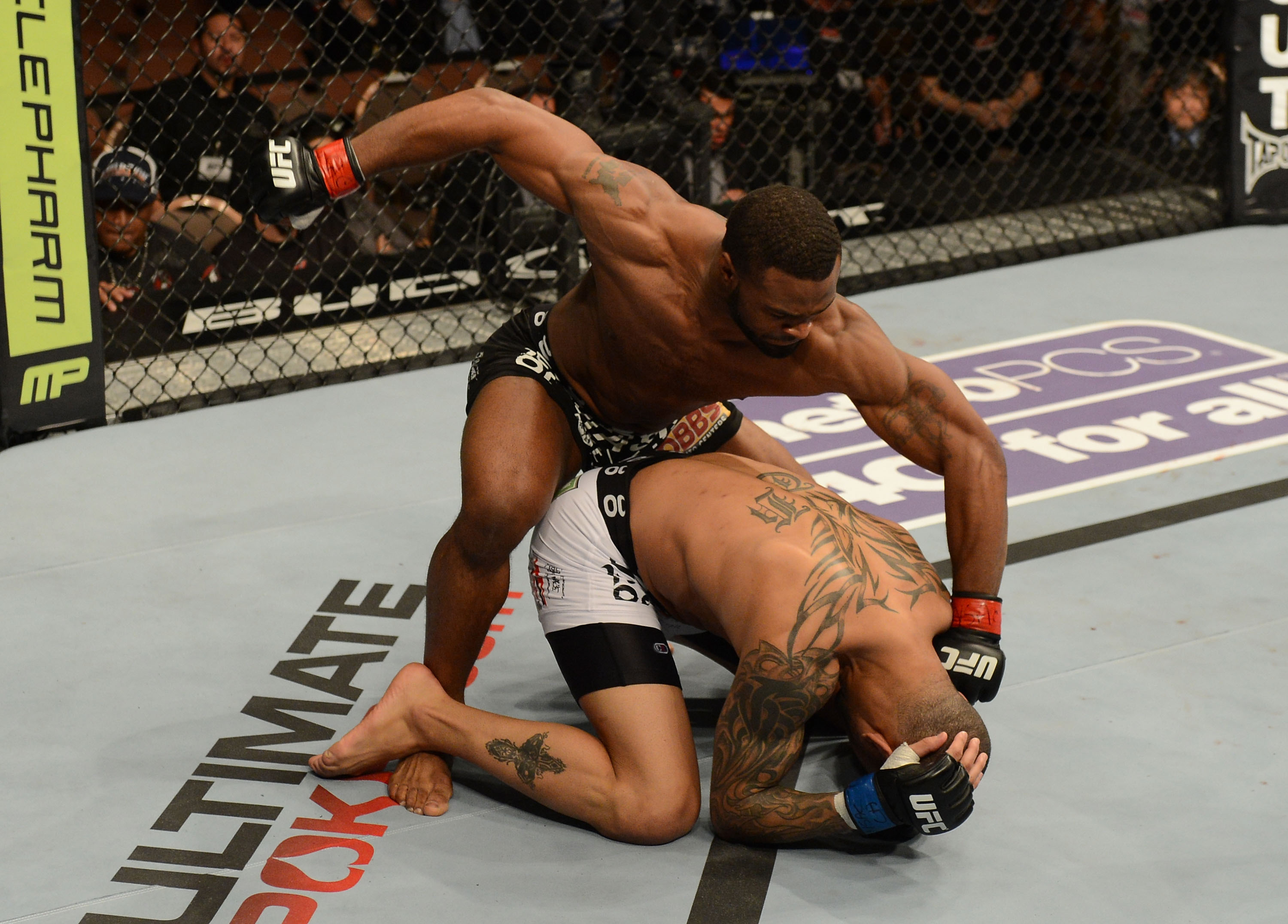 probably on the other welterweight bout (between Rory MacDonald and Robbie Lawler), but I feel like me and Koscheck have the matchup where we can come out here and it’s going to be some Diego (Sanchez)-(Gilbert) Melendez action.

“If they didn’t show you how somebody can steal the show, I don’t know how – the main event was a good fight, but that dang-on Melendez… that was the best fight I’ve seen in my life.”

Woodley laughs, thinking about the instant classic the lightweights delivered from the middle position on the UFC 166 fight card.

“It makes you check yourself,” he says with a chuckle, even though he’s entirely serious. “How do you fight comfortably after that? These dudes right here were going for broke the entire fight, and it’s like they raised the bar so high that anyone that wants to fight conservatively like I’ve done in some fights, they set the bar high for us.

“I think this card was supposed to be the stacked card of the year, and that card showed up every other card this year. So now it’s our turn to say, `We’ll match you, and we’re going to raise you one.’ That’s my goal, and that’s my mindset.”