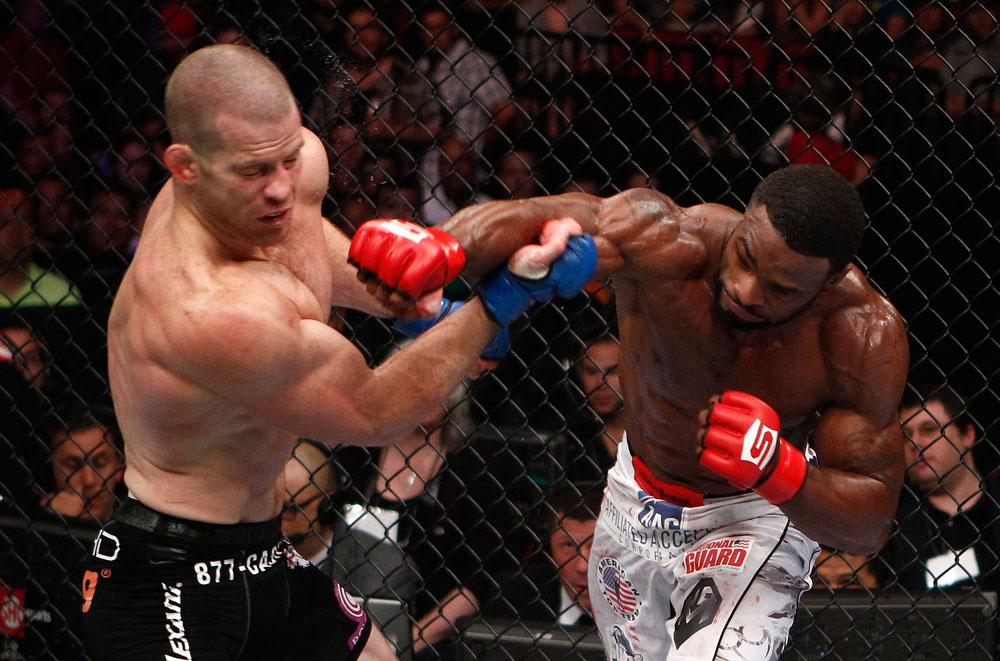 They complained about Tyron Woodley. They couldn’t appreciate that the two-time Division I All-American wrestler from the University of Missouri had won each of his 10 pro fights, most in dominant fashion, and, contrary to popular belief, most by knockout or submission.

And there were quality fighters on that list of Woodley victims: Tarec Saffiedine, Paul Daley, Andre Galvao, Jordan Mein.

But a dominant wrestler rarely gets the acclaim a reckless striker will receive, so Woodley took the criticism with a grain of salt, and when he got his shot at the vacant Strikeforce welterweight title against Nate Marquardt in July of 2012, his plan was clear.

“In the Nate fight, we were just gonna go in there and fight like two mice in a wool sock,” laughs Woodley, not too far off from what actually took place for nearly four rounds in Portland, Oregon last summer.  In an entertaining scrap, Woodley dropped Marquardt, the former UFC title challenger recovered, and in the fourth round, Nate “The Great” handed Woodley the first loss of his career via knockout. It was a tough way to make a point, but Woodley isn’t crying over the end result, even if migrating to the UFC would have been even sweeter with a title belt around his waist.

“For the fans, I think they liked how the fight went,” he said. It was a teeter-totter, back and forth battle and it was exciting for them to watch, but at the end of the day, would I have gone to the UFC with a little bit more steam if I went over with the belt? Yes. But I think Dana (White) and Lorenzo (Fertitta) saw what happened in that fight and they saw what I was able to do.”

So it was no surprise when Woodley was brought into the UFC family after the announcement that Strikeforce was shutting its doors, with his first fight in the Octagon coming up this Saturday against veteran Jay Hieron. What may be surprising is that Woodley plans on bringing the heat early and often in Las Vegas this weekend.

“God has given me true gifts, talents, and abilities, and it’s time for me to prove it to myself and start knocking people’s heads off,” he said. “Jay Hieron is a tough opponent, he’s got good name recognition, he just had a really close fight with Jay Ellenberger, and knocking him off in great fashion is gonna put me where I’m supposed to be. I think Strikeforce missed the opportunity to market me the way they should have, and I think I’m gonna be a star in the UFC.”

One of the true homegrown fighters on the Strikeforce roster, Woodley fought just twice professionally before being brought in by the promotion, and from there, all he did was win.

“I’m a big part of Strikeforce’s history,” said Woodley. “I sold 200 tickets to fight on the undercard in June of ‘09, and I helped solidify the Challengers series along with Tim Kennedy and Luke Rockhold. And I feel like I earned my way to a title shot fighting Paul Daley, Jordan Mein, and Andre Galvao, having a super tough fight against Nate Coy, and beating Tarec Saffiedine in a very convincing two out of three round fashion.”

But again, wrestlers who have the ability to control a fight from beginning to end on the mat take their share of abuse from fans, and even some segments of the media. Woodley’s response?

“It’s a chess match,” he said. “Tarec Saffiedine is an amazing striker. How many opponents has he been able to showcase his striking on? Nate Moore, (Tyler) Stinson, and even the fights in Japan that he lost, he still showed great striking. I’m the only guy that neutralized anything he brought to the table, and I actually outstruck him, as well as outstruck Paul Daley, the knockout artist. And when I fought the Abu Dhabi grappling champion, Andre Galvao, I knocked him out. Nate Marquardt is the only guy where I actually went into his element. People don’t realize my striking abilities, but I showed him (Marquardt) and he has a lot more respect for me now than he did going into the fight because he expected a pressure-type, wrestling, taking you down and controlling position fight, and he got something different.”

So did everyone watching, and while the end result was a negative one, knowing that Woodley can turn up the heat when he wants to bodes well for him and the fans as he begins his UFC journey. And the 30-year-old St. Louis native doesn’t plan on taking the long road to the title. He hopes for a short and intense one.

“I’m gonna go through Jay Hieron – no disrespect to him - and the punches he’s about to get have nothing to do with him,” said Woodley. “It has something to do with proving something to myself, really leaving it out there and giving a first good impression in the UFC, and from that point on, I want the Top Five. Let me knock them off, and I’m ready to do it. I want Rory MacDonald, (Nick) Diaz, (Martin) Kampmann, (Jake) Ellenberger, (Carlos) Condit. That’s who I want after this fight and I’m gonna ask for them and I’m not gonna be quiet about it because a lazy pig don’t get no slop. I want to make sure I’m putting myself in position to get a crack at GSP (champion Georges St-Pierre) because I feel like I match up very well with him and it’s too long of a road to be going from the bottom and working your way through a round robin tournament. I realize that and I’m ready for it.”

Needless to say, with words like that, the game has changed for Tyron Woodley and the landscape at 170 pounds just got a little more interesting.

“I’m fighting with a different meaning and a different passion,” he said. “What can happen? Get knocked out again? Lose again? I lost in the worst fashion you could lose in. I lost in a world title fight with all the marbles on the line, I lost by knockout, and I had my first loss. So in this fight against Hieron, nothing can happen that’s worse than what I’ve already had.”