Tyron Woodley: The Problem and the Solution

"I possess the gifts and the skills, I’ve got the training partners, I have the conditioning, I have the coaches - the only thing that I have to do is do it." - Tyron Woodley 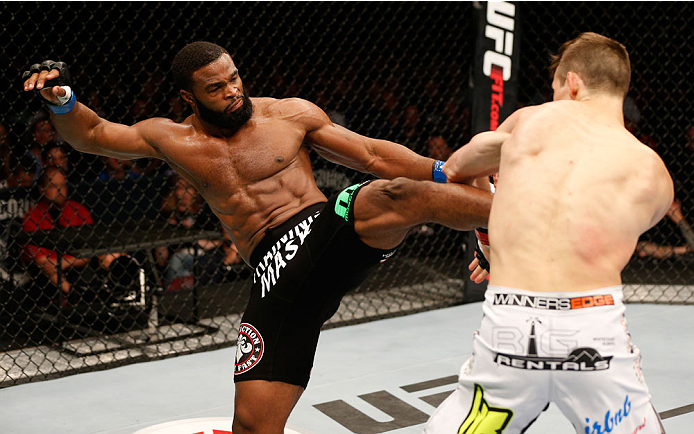 In the weeks leading up to UFC 174, Tyron Woodley was saying all the right things.

Matched up with Canadian contender Rory MacDonald in the British Columbia native’s backyard, Woodley talked about earning a third consecutive victory, making a statement against “Ares” and proving to UFC President Dana White and everyone else that had been critical of him in the build-up to the fight that he was deserving of a shot at the welterweight title.

All week in Vancouver, the 32-year-old appeared calm and focused, reiterating the points he’d been making since the bout was announced, embracing the opportunity to square off with the local favorite in the co-main event and solidify his place in the upper echelon of the talent-rich 170-pound weight class.

But when the introductions were over and the Octagon door was locked, Woodley couldn’t pull the trigger. For 15 minutes, he hesitated - stalled along the fence as MacDonald walked him down, sniping at him with stiff jabs and confidence that continued to climb as another minute ticked off the clock without Woodley offering much in return.

Those on press row whispered about possible injuries, asked whether anyone knew how his weight cut had gone and generally looked on as perplexed as everyone else that had heard the pre-fight promises of an action-packed performance that would silence those that said he was inconsistent. Instead, his poor showing added fuel to that particular fire and brought Woodley’s climb up the divisional ladder to a sudden stop.

A few weeks after the bout, Woodley posted a picture on his Instagram account: he stood in the left half of the image, gloves on in the middle of a training session, with the words “I am my problem but also my solution” occupying the right side of the frame.

“I think some people have the problem of not having the skill or the power or the athleticism or the work ethic or the conditioning or the coaches,” he says, beginning his explanation of the message conveyed in the photo. “I have everything. I was blessed with genuine gifts from God, I have a great mindset, and I also train hard and have a great work ethic, so all those things put together with a great circle, great people, I have all the tools to be the best.

“I feel like skill-wise and on paper, I am the best, but the solution to the problem is allowing myself to be the best. That’s as simple as I can make it. I know my problem, but I am my solution.”

Vancouver stung and halted his momentum, but the American Top Team product didn’t have to wait long for the opportunity to put the loss behind him.

Ten days after losing to MacDonald, Woodley accepted the opportunity to step in for fellow ATT welterweight Hector Lombard opposite surging South Korean Dong Hyun Kim in the co-main event of the UFC’s latest trip to the CotaiArena in Macao.

Entering on a four-fight winning streak and riding high off a third-round finish over John Hathaway that remains one of the leaders in the Knockout of the Year race, Kim is in the position Woodley occupied two months ago, looking to solidify his place in the title chase with a victory over one of the few fighters ahead of him in the rankings.

“I was walking in the gym when they called me and I said, `Let me train real quick,’” Woodley, who was in Singapore working with the team at Evolve MMA at the time of the call, explains. “I trained, felt good, came back out and said, `Let’s do it!’

“I think this is a blessing. I helped (the organization), but they helped me. I needed to get back in there. I needed to jump right back in and redeem myself for myself, not for anybody else.”

Woodley refuses to make excuses for his performance against MacDonald in Vancouver, opting instead to keep the focus on himself and what he needs to improve in order to reach his goals and one day fight for the welterweight title.

“I don’t want to do anything that detracts from what Rory did. He had an animal in front of him and his whole game plan was basically `do not get bit by it.’ He did a good job of neutralizing and when he found out that `Damn, this animal is not even biting today - let me step forward a little bit.’ I don’t want to take that away from him.

Despite his setback earlier this summer, Woodley knows he’s still in the thick of the championship chase in the 170-pound ranks and a victory over Kim will not only put him back in the win column, but help solidify his place in the Top 5 once again.

In a tight, competitive division like welterweight, there isn’t much that differentiates the No. 1 contender from the No. 7 or 8 man in the rankings - one win can bump a fighter up a spot or two and one loss can send the same fighter tumbling in the opposite direction, and that reality is part of what is pushing Woodley as he readies to return to the Octagon on Saturday.

“The separation between the best in the division is not a big gap. We’re all so close. It’s the one percent, maybe less, that separates us and I feel that I can present that X-Factor and that I can tap into that one percent to get me to the next level. It’s really just about doing.

“I don’t think about fighting like everyone else,” the proud father and husband continues. “I don’t hate the guy across from me, it ain’t life or death, and this ain’t the only thing I can do. For me, it’s competition and I think maybe at times I need to put more of that type of urgency, maybe I need to visualize somebody snatching the Pampers off my kid’s butt or a plate being removed from under my son’s fork and put myself into that mindset where it is kind of life or death and maybe that urgency will allow me to jump out there a little bit more.”

For the man heralded as “The Chosen One,” it all comes back to knowing the problem and being the solution.

“I know who I am, I know what I do and what I will do when it’s all said and done, so I don’t allow anything to really steer my mind away from that. It’s really simple: I possess the gifts and the skills, I’ve got the training partners, I have the conditioning, I have the coaches - the only thing that I have to do is do it.”