Tyron Woodley: Locked In On Greatness

Former UFC Welterweight Champion Tyron Woodley Has A Clear Mind And A Clear Goal For UFC 260: Be Himself
By E. Spencer Kyte, on Twitter @SpencerKyte • Mar. 25, 2021

Tyron Woodley doesn’t want to hear the comments about how his forays into music and acting contributed to his fall from the top of the welterweight division and the three-fight losing streak he carries into this weekend’s main card showdown with Vicente Luque because he was exploring those outlets long before he sat atop the 170-pound weight class.

No one really said much when he was on the come up and began dabbling in Hollywood by doing stunt work, playing a Secret Service agent in Olympus Has Fallen or the guy that pulls up in a drop-top low rider in Straight Outta Compton.

Nor was there much chatter when he won the welterweight title from Robbie Lawler and retained the strap through four title defenses, tied for the most amongst male champions between 2016 and 2020, while further establishing a foothold in film and beginning to work in the recording studio as well.

Watch Woodley In The Co-Main Event Of UFC 260

But as soon as he dropped the belt and the losses began mounting, folks were quick to question Woodley’s priorities, believing the time, energy, and attention he committed to his burgeoning rap career and other pursuits contributed to his struggles in the Octagon.

"It's liberating not to try and prove millions of people wrong."@TWooodley is blocking out the noise and approaching his fight with Vicente Luque the way he knows best 🔊⬆️

“It’s not a distraction when people play Madden or do other stuff, but then when I did something, it was a distraction,” said Woodley, annoyed by the double-standard where only certain outlets for certain athletes are framed as detrimental to their careers. “We call this sport MMA, but when you break it down, it’s mixed martial what? Art. I’ve been doing some stuff lately that’s different, but I’m not going to separate the two.

“Of course, I don’t need to be up in the middle of the night, recording or producing, but there’s 24 hours in the day, so I train, eat healthy, do my strength and conditioning, but you’ve got to have fun stuff, and instead of doing some of the other things people do, I choose to make more art.”

One of the interesting facets about the frequent discussion of Woodley’s current slide and his place in the welterweight division as he heads into this weekend’s bout with Luque is that they’re seldom accompanied by an acknowledgement of the other side of those pairings and the differing status of those fights for Woodley and his opponents.

While the 38-year-old enters Saturday’s contest on a three-fight skid, he entered the first of those fights as the welterweight champion, dropping the belt to Kamaru Usman, who has quickly rattled off three consecutive successful title defenses since to establish himself as a dominant force atop the division. 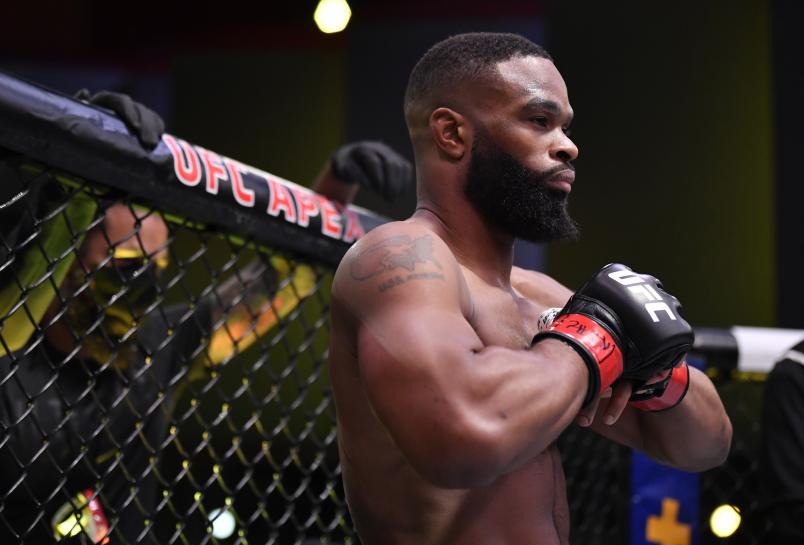 Tyron Woodley prepares to fight Gilbert Burns of Brazil in their welterweight fight during the UFC Fight Night event at UFC APEX on May 30, 2020 in Las Vegas, Nevada. (Photo by Jeff Bottari/Zuffa LLC)

The second came against Gilbert Burns, who’s victory catapulted him into a championship fight against Usman, where he tagged the champion in the early moments of the contest before the Nigerian-born titleholder gathered himself, regrouped, and garnered a third-round stoppage win.

And his most recent setback came opposite Colby Covington, the polarizing perennial contender who pushed Usman to his limit in their title clash at UFC 245.

In each instance, those men looked at their date with Woodley as a chance to reach the next level and further their championship ambitions, while the battle-tested former champion struggled to view things the same way.

“I was one of the most active champions and I had to take a little step away from it for a minute so I could love it again,” continued Woodley, who dealt with myriad injuries during the course of his title reign. “Those guys, their motivations to beat me, what I was — they wanted to have that notch on their belt, and they made up the gap; their skill-level increased and they came into the Octagon more focused.”

That’s not to say the former welterweight champion doesn’t understand how three straight bouts where he failed to pull the trigger and the action inside the Octagon was constant one-way traffic headed in his direction can lead some to question his mindset, his focus, and whether the skills that helped carry him to the top of the division five years ago have eroded to the point where he can no longer hang with the welterweight elite.

Like anyone else in his position, Woodley knows questions like that fuel pre-fight conversations and shape the narrative around Saturday’s bout with Luque, who enters on a two-fight winning streak, aiming to become catapult himself into contention by dispatching the former champion the same way his friend and training partner Burns did last spring.

But at his point in his career and his life, “The Chosen One” believes the only people he’s owes any kind of answers and needs to prove anything to are himself and his coaches.

“I just want to make sure that my performance matches the work, the preparation, the time away from my family, their time away from their families; that I tap into that feeling when I was training, pushing myself,” he began. “If I do all those things, that fighter (from the gym) is going to show up on Saturday night. 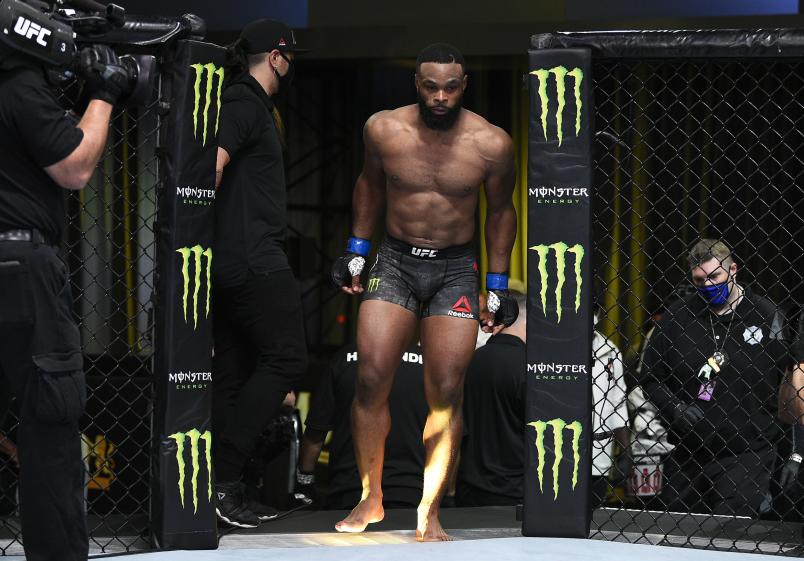 “Locking into that, for me, has been the biggest piece of the puzzle in this camp and I’m feeling very confident.”

Though some will argue Woodley is simply dropping fight game clichés as he once again makes the walk looking to halt the only losing streak he’s ever endured, sometimes the simplest answer and most basic idea is the one you needed to get reacquainted with all along.

After five years of being “The Hunted,” the former champion is once again feeling like “The Hunter” ahead of UFC 260.

And after a frustrating, but ultimately fruitful period of struggle and strife, even a wordsmith like Woodley is at a loss when asked to sum up what a victory on Saturday night would mean and how it would make him feel to finally have his hand raised inside the Octagon again.

“It’s going to feel good to prove to myself that I’m still that guy,” said Woodley. “He’s coming for me and I’m coming for him. It’s a very important fight and I’m excited about it.”