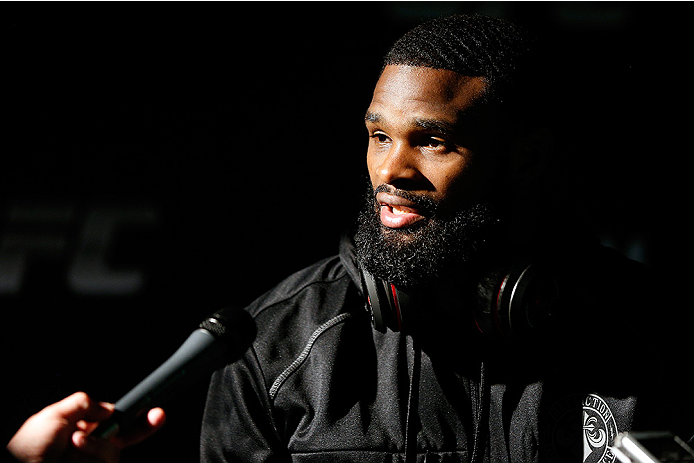 These days, and perhaps forever, the word “Ferguson” will represent a place where relations between police and civilians and black and white in a small Missouri town were put in an international spotlight for all to see and debate.

Yet for UFC welterweight Tyron Woodley, Ferguson will always be home.

In describing the place where he spent much of his 32 years, he says “Ferguson is a good place to live. There are positive people there and there’s a sense of community there. It’s a small community where you know your neighbors, they know you, and they might even have a key to your place. It’s a good place, and I just don’t want it to be reflected so negatively.”

On August 9 of this year though, the city – population 21,000 – got noticed for all the wrong reasons after 18-year-old Michael Brown was fatally shot by police officer Darren Wilson. What followed next were cries of outrage, vigils, looting, police standoffs, and protests as opposite sides clashed in an attempt to get to the bottom of the incident and not just that, but to figure out how to cure what many believe is a much bigger issue in this country’s cities.

Woodley, preparing for an August 23 bout in Macao, China against Dong Hyun Kim, watched helplessly, wanting to go back, but his wife insisted that the family needed him at home.

“I didn’t go,” he said. “And I’m thankful I didn’t because that was the night they blew that QuikTrip up.”

That was August 11. Twelve days later, Woodley went to China and took just 61 seconds to knock Kim out. When he came home, Ferguson was still a powder keg.

“When they say things hit close to home, it didn’t just hit St. Louis, it hit my actual neighborhood where I grew up,” Woodley said, admitting that what took place was, in his eyes, a long time coming.

“I think it’s something that’s come to a head. I’ve seen racial profiling and harassment. I’ve seen them (police officers) beat some of my friends on multiple occasions. And these are real things. Unfortunately it took for this kid’s life to be gone for us to bring up those facts. But in addition to that, we do have the 14 to 18-year-old group of kids that are responsible for the majority of the murders in St. Louis, and really around the country. Their mindset and the way they value their own lives is very limited, which means that they’re not going to value my life, which means they’re willing to take your life because they don’t even really care about their life. So their value of life is not existent at all.”

That’s not just a problem in Ferguson, but around the country, and Woodley is quick to not assign blame to one particular side, but to realize that there are issues everywhere that need to be addressed. And he wants to be someone who isn’t just addressing them, but trying to come up with solutions.

“I’m really compelled to make a difference and make a change,” he said. “People don’t realize that this is something that we, as people of influence with a certain power or platform, can help this problem. Kids need to see the real deal.”

Woodley is just that, and he is well aware that showing up to make a speech at a school and take some pictures and sign some autographs will do nothing to make an impact on the culture in Ferguson and elsewhere. Woodley’s plan goes deeper than that.

“We’re doing a movement,” he said. “Part of the movement is that we’re going to talk to all of the schools in Ferguson-Florissant school district that will give us access. There are about 30-plus schools – elementary, middle school, high schools. I’ve already been to two and I’ve got two more scheduled already, so we’ve started it. In addition to that, I feel we need to be in the community, so we’re going to put together a community event in Ferguson, as well as sponsor some youth athletic teams in the St. Louis metropolitan area.”

Committing to join him so far is a diverse group of athletes and celebrities from Andre Ward and Maurice Clarett to actor, activist and Bloods gang member Bone and rapper King Thi’sl.

“I think we’ll all reach somebody different,” Woodley said, pulling no punches when it comes to his thoughts on a generation that needs to move in a different direction. “We’re coming in for the collective good to reach the kids and to help change the mindset for the generation that’s to come. This generation that we’re in now has been ruined. We can try to influence and make peace and try to do what we can for this generation now, but grown men and women kind of have their mind set on what they believe and what they think and what they think is right and wrong. I think it would be time better spent if we went to the schools and see if we can save the next generation as far as their mindset, the way they think and process information, respecting authority, respecting themselves, self-worth, and all these different topics that we’re going to address. And we also want to show them that we’ve been there, we’ve risen above our situation, we’re successful, and we found a way when there was no way and we took every opportunity that we got and we made the best of it.”

Woodley doesn’t speak from an Ivory Tower, unable to really relate to what’s been going on in Ferguson. He’s been there, more than most even know.

“I lived in a house of 13,” he recalls. “We didn’t even have money and we got evicted from our house at one point.”

Not surprisingly, Woodley saw those in the neighborhood who weren’t living the way he was, and he wasn’t just intrigued about life on the wrong side of the law; he wanted to be a part of it.

To a young man desperate for what he perceived was a better life though, the other side was more than tempting.

“I want in,” he told one dealer he was friendly with. “I’m tired of being broke.”

The dealer refused his offer. So did another he knew. Their answer to him was identical.

“They told me ‘No, you’re gonna go to college, you’re gonna be successful, and you’re gonna wrestle. Keep making honor roll and keep doing great in wrestling. I’m not allowing you to do that.’”

Woodley would go on to have great success at the University of Missouri, both athletically and academically, graduating with his degree in 2005. By 2009 he was a pro mixed martial artist, and he currently sits at number three in the UFC’s welterweight divisional rankings. So what kept him from getting caught up in the life so many youngsters do these days?

Back in the “good ol’ days,” and even when Woodley was coming up, there was, for want of a better term, “honor among thieves.” If a young man or woman showed the potential and talent to get out of their current situation, the criminal element would make sure they didn’t get involved in illegal activity. It’s all very Hollywood-esque, but those who grew up in such neighborhoods know that it was very real. These days, it’s not really the case anymore.

“The problem is way beyond the actual case and the situation that happened,” he continues. “The problem is a mindset. The respect for authority, the authority respecting the community – it’s a double-edged sword. And the first way we can start is by starting the peace. Everybody can say stop the violence, stop the profiling and the brutality, and actually, we can stop fitting the profile so well. Stop fitting the stereotype by committing crimes and being unlawful. Be engaged, be voters, and be people that care about what’s going on in our community. We bring a lot of these officials in through voting or through not voting. The first thing we can do is fix ourselves.”

Strong words, but when you care like Woodley does, those are the only ones that hit home. So he’s got his proverbial gloves on to make an impact.

“That’s my drive and that’s my vision right now, and we’re hitting it hard,” he said.

“I do see hope and I think things can change. And if I have anything to do with it, things will change.”