Eleven years ago, Marcin Tybura didn’t expect that one day he would be in a prizefight in Singapore against a former UFC heavyweight champion in Andrei Arlovski. He didn’t even see Saturday’s co-main event as part of his eventual journey when he turned pro nearly six years ago.

“At first, my intention was to train for myself, not to be a pro fighter,” Tybura said. “Even when I started pro fighting in 2011 I did not expect to be so serious about MMA.”

But here he is with a 15-2 record, a top 15 ranking and the opportunity to move even higher if he can extend his winning streak to three by beating Arlovski. That’s a lot of good stuff to digest, and Poland’s Tybura is taking it all in.

“It is an honor to fight such a legend,” he said. “He is well known worldwide and I understand it is a big opportunity for me to get new fans and show my skills to more people.”
RELATED: Tybura matchup with Arlovski | Singapore Fantasy Preview | Three fighters On the Rise

Yet despite enjoying the spoils of all his hard work to get here, the 31-year-old isn’t going to be too respectful of “The Pit Bull” come fight night. And if he has to hand Arlovski his fifth straight defeat, it’s nothing personal.

“I was following his fights as a fan, but I stopped being his fan when I signed the bout agreement for this fight,” Tybura said. “I will start being his fan again on Sunday after the fight. Right now we have business to do.”

Adhering to the task at hand is something Tybura excels at, and after a decision loss to Tim Johnson in his Octagon debut in May of last year, he scored back to back knockouts of Viktor Pesta and Luis Henrique. These wins put momentum squarely in his corner, though he doesn’t dismiss what Arlovski is bringing to the Octagon this weekend despite his recent skid.

“Of course he is still dangerous,” Tybura said. “All his losses came from the very best heavyweights in the world, starting with current champion Stipe Miocic. So he is dangerous, but not as dangerous as I am.” 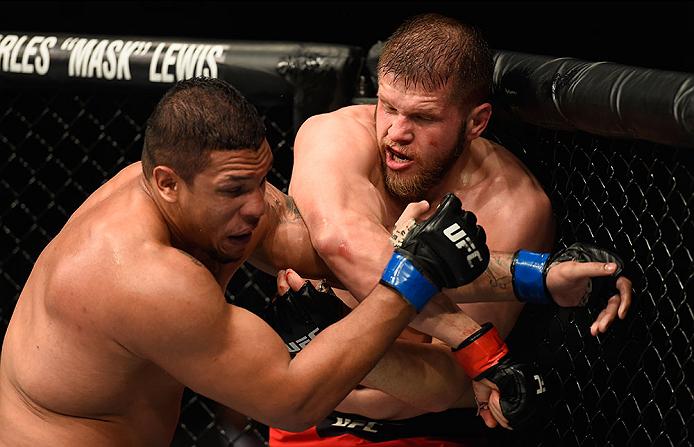 Winning builds confidence in any sport, and it’s no different in MMA, where Tybura is riding high at the moment.

“I am happy with those two wins and turning a defeat in my UFC debut into success,” he said. “I am a much better fighter now.”

Is he a championship contender, though? Saturday’s fight will start to answer that question, and Tybura is eager to keep climbing the heavyweight ladder.

“It is what we are training and fighting for, to be the best and fight the best,” he said. “I hope my career will keep moving forward and I will have more and more fights like this one. I want to win this fight and end the year as a top five heavyweight. That will be nice position to start 2018, but right now I have to get through Andrei Arlovski.”

Clearly, it’s safe to say that Tybura doesn’t regret leaving his masters degree from Uniwersytet Lodzki behind for the fight game.

“First of all, it is about emotion and adrenaline, and it is something I don't think you can find in a casual job,” he said. “The moment you are walking out in a big UFC event is something amazing. I will have a lot of great memories from my MMA career.”