Tybura has experience against former champs, focused on Werdum 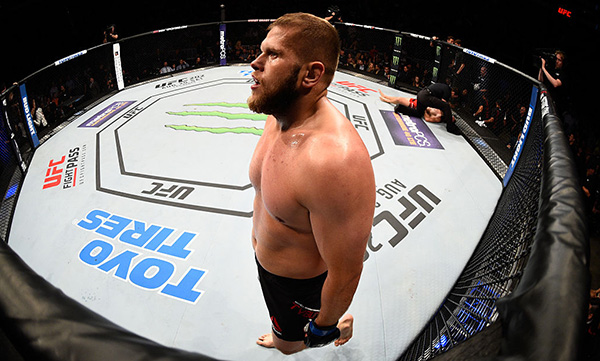 Marcin Tybura of Poland celebrates his knockout victory over Viktor Pesta of the Czech Republic in their heavyweight bout during the UFC Fight Night event at Vivint Smart Home Arena on August 6, 2016 in Salt Lake City, Utah. (Photo by Jeff Bottari/Zuffa LLC)" align="center" />

Coming off a unanimous decision win over Andrei Arlovski in the spring, Marcin Tybura knew his next opportunity to step into the Octagon would come against another high profile opponent; one a little further up the heavyweight rankings, where a victory could carry him into the title conversation.

With a little over a month remaining in his training camp, the Polish standout got a call from his manager that upped the ante on his next appearance even more.

Originally scheduled to face Mark Hunt in the main event of this weekend’s return to Sydney, Australia, the veteran knockout artist was pulled from the bout and Fabricio Werdum was ready to take his place.

“It took us like one hour to decide because I always ask my coaches,” said Tybura, who ultimately accepted the contest and faces the former champion this weekend at Qudos Bank Arena. “Once my manager called me, I called Coach (Mike Winkeljohn) and he said, ‘If you want to do it, let’s do it’ and I said, ‘Yes.’

“The thing I didn’t like is the changing because it has already happened to me several times in the UFC,” continued Tybura, who missed out on the opportunity to face Derrick Lewis in October 2016 and had his fight with Luis Henrique pushed back a month at the start of the year. “I didn’t like when this happened again because it’s a different style we were preparing for with Mark Hunt.

“It’s a completely different style, but as I decided to do it, I just focused on my new opponent and a bigger challenge.”

Getting the opportunity to share the cage with Werdum is certainly unexpected, but it also feels like a logical progression for the 31-year-old Tybura.

After dropping his promotional debut, the native of Uniejow has rattled off three straight wins to climb to No. 8 in the 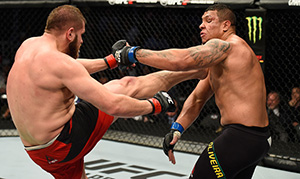 rankings. While he wasn’t able to put away Arlovski in their co-main event encounter in Singapore back in June, the victory over the veteran stalwart was easily the biggest of Tybura’s UFC career and validated his place in the Top 10.

Although competing at the highest level in the sport and facing former UFC titleholders wasn’t something that he thought about when he first began his journey into mixed martial arts, reaching this point and proving that he is the best heavyweight in the world were definitely goals Tybura had in mind once he made the decision to sign with the organization in at the start of 2016.

“When I started my career, I didn’t expect it would come that far and that quick,” he said, echoing feelings he shared with Thomas Gerbasi prior to his encounter with Arlovski earlier this year. “But once I decided to join the UFC, I was already sure that I’m looking forward to being in the biggest fights of my life and that has come really quick.

“My last fight was already with a former champion and now it’s the main event, but that’s something that has happened before in my life in other organizations,” continued Tybura, who won championship gold and headlined multiple events under the M-1 Global banner before matriculating to the UFC. “I’ve got the experience – I’ve been champion of M-1 and I did main events in big arenas at least five or six times, so that’s not something new.

“I was actually expecting this,” he added. “I’m very confident about it and I’m going to prove that I’m in the right place.”

As of right now, there is no denying the surging contender is on the ascent – he’s won his last three outings and is part of the new wave of talent currently making waves in the heavyweight division.

If he’s able to push his winning streak to four and beat Werdum on Saturday, Tybura will not only prove that he’s a legitimate threat in the heavyweight division and position himself for a potential title shot in 2018, but he will also register the biggest victory ever for a male Polish MMA fighter.

“I think it will be the biggest MMA win in male Polish MMA,” he said of potentially beating Werdum. “There is Joanna (Jedrzejczyk) who (had a lot of success) and it will be hard to beat her and I’m a big fan of her, but it’s something historic for Poland.

“For me, it means that I’m making history in Polish MMA.”